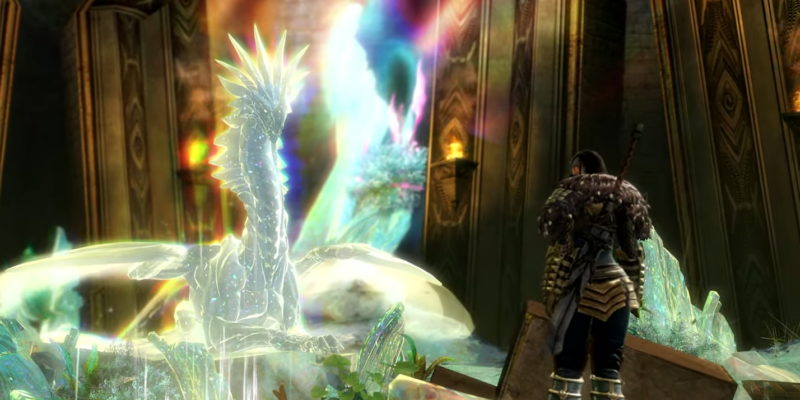 Visions of the Past will differ from previous Guild Wars 2 content by letting the player take on the role of a character other than the Pact Commander (the game’s main protagonist).

A life of steel and fire

In the teaser trailer, Elder Dragon Aurene invites players to look into the scrying pool and dive into the first Visions of the Past story, Steel and Fire. In this chapter, players will take on the role of Ryland Steelcatcher. He was introduced in the prologue before the latest Living World story arc, the Icebrood Saga. He’s also the son of longtime Guild Wars 2 legend Rytlock Brimstone and the shrewd Crecia Stoneglow.

In Steel and Fire, players will get to experience life as a member of the elite Steel Warband. You’ll use sniper rifles on your enemies, partake in friendly monster-slaying competitions, and ride shotgun in the Charr’s finest armored vehicles.

Delving into the past of iconic Guild Wars 2 characters is going to be a wonderful experience for lovers of the game’s lore. And it’s more story content, which is always a good thing in an MMO. But players are still going to be left wondering when a new expansion will arrive to take the game forward.

A lot is happening in Guild Wars 2 right now, with the Call to Glory update also arriving this month. You can check out all the details about the PvP and WvW (World vs. World) focused update in our previous article.