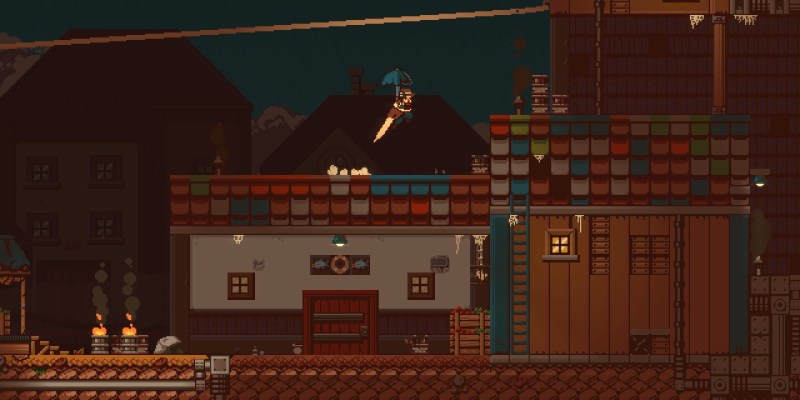 When I first booted up the Gunbrella demo, I wondered what it could do to wow me. It didn’t take long to find out. The game almost immediately gave me the eponymous item, which initially acts as a shotgun crossed with an umbrella. Who woulda thought? Gunbrella is set to release next year, and I got the opportunity to check the demo out a bit early. After spending half an hour with it I can honestly say that I’m already completely sold on this game, as the gameplay on offer is as unique as it is brutal.

The Gunbrella demo begins with simple instructions. You’re a guy with a beard who’s incredibly good at eviscerating people (and frogs!), and you’re supposed to go to a town and get a train running again. Unfortunately, the town’s mayor has been abducted by an insidious group known as Cult-45 (I get it). Naturally, our hero decides to walk into the cult’s compound via the front door and kill his way to the mayor. What more of a story could you possibly want? Aside from minutes of real-life footage decrying the horrors of the nuclear arms race, I mean. Everyone knows that makes for the best exposition.

The Gunbrella immediately makes the game stand on its own. As it’s both a gun and an umbrella, you can shoot it and do umbrella things. Actually, that’s not true. None of the umbrella usages in this game are reminiscent of an actual umbrella. You can use it to dash in any direction, plus it also works as an impregnable shield that keeps you safe from harm. If you press the umbrella button right before an enemy bullet hits you, you’ll deflect it back towards your attacker. It’ll then hit them, which will likely make them explode.

Yes, there are a lot of enemy explosions in this game. Shooting someone point-blank with a shotgun will do that. You can aim your shots and the umbrella itself in Gunbrella. Plus, if you hit an enemy with the umbrella, it’ll temporarily stun them.

The action is very entertaining. You can jump above an enemy and then shoot them from mere inches away without them becoming aware of you. Or you can approach them and deflect their shots. Combat is as responsive as it is violent, so it’s easy to adapt the way you play based on the needs at hand.

Once you make it into the bowels of the Cult-45 compound, you’ll find out that the cult is sacrificing people to create some kind of giant corpse monster. You need to fight it, of course. You can use any healing items you’ve obtained, as well as different kinds of ammunition, including grenades. Once this enemy is dispatched, you’re able to board the train and end the demo. I am very much looking forward to playing Gunbrella when it releases next year, as everything about it just screams at me. Because it’s in agony from all of its organs exploding. Good talk.

Developers and Stadia employees did not know about the shutdown