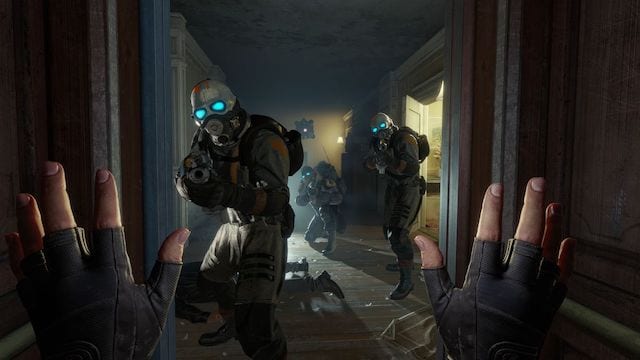 Ever since its official announcement last month, Valve’s Half-Life: Alyx has left people intrigued. Trading a traditional gameplay experience for a VR-enabled one is sure to leave some criticisms. However, the game’s trailer really showcases what you can do within this world, even with the limitations of the tech.

And now, thanks to a new video from the team at Tested, we are getting a better idea of how it all comes together. In the clip, featured below, the host walks through the game using a number of different headsets and also shows off some aspects with off-screen gameplay.

While there are some segments where you can’t quite see what’s happening in the game, you get an idea of what actions are needed. Across the 30 minutes of footage, there are different activities, mainly revolving around the accurate hand-tracking. This makes it handy to reload a weapon, grab items, and do other things within Half-Life’s vivid world.

There wasn’t really much new in the way of story or even sequences that show what Alyx is up against in the game. But at the very least, Tested’s demonstration provides us a glimpse of what we’ll look like playing it, as well as just how well the VR tech works when it comes to introducing Half-Life’s universe to it. Now if only we got a closer look at the rest of the gameplay. Soon enough, we suppose…

Half-Life: Alyx is set to release sometime in March. There isn’t a more specific date at the moment; however, you can preorder the game on Steam. It’s currently available at 10 percent off its normal price, marked down to $53.99. We’re not sure how long the price will last, so you may want to jump on it while you have a chance.

Contest: Win a Steam copy of Jamestown+, just in time for Christmas