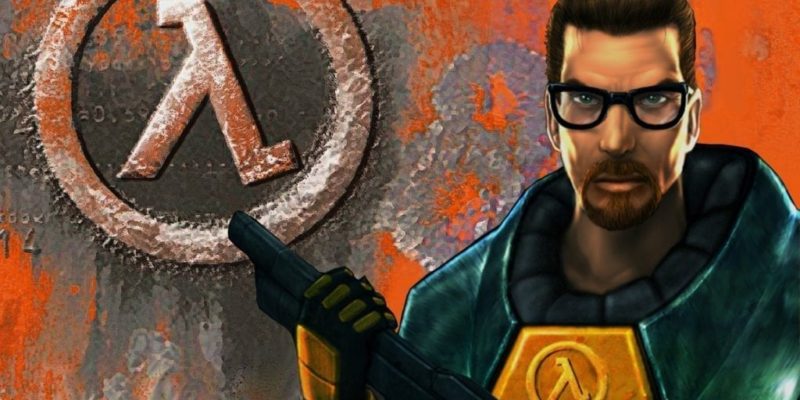 November 19, 1998, would have been a normal and uneventful day. Some of you might’ve been playing StarCraft. Others were probably still finishing Metal Gear Solid. But then something happened. Something that made the uneventful turn into a momentous occasion. Half-Life, Valve’s first ever blockbuster, was released.

Twenty years later, long-time fans celebrated the game and the influence it has had on the entire gaming industry. It was a watershed moment for the first-person shooter (FPS) genre. Half-Life immersed gamers and kept them engaged throughout the entire campaign. It became known as the one unique gem in a sea of first-person shooter clones. Although Gordon Freeman was a silent protagonist, the game’s level design, narrative, mechanics, and overall presentation spoke volumes.

Players might recall crawling inside vents only to spot a headcrab walking around. How about running across rooms and corridors, save scumming just to ensure that your health remained full, or encountering the G-Man from time to time? There were intense action-filled sequences and creepy moments to be had. Yet, for all of Half-Life’s accomplishments as a single-player game, it helped inspire an even more important movement: the modding community. 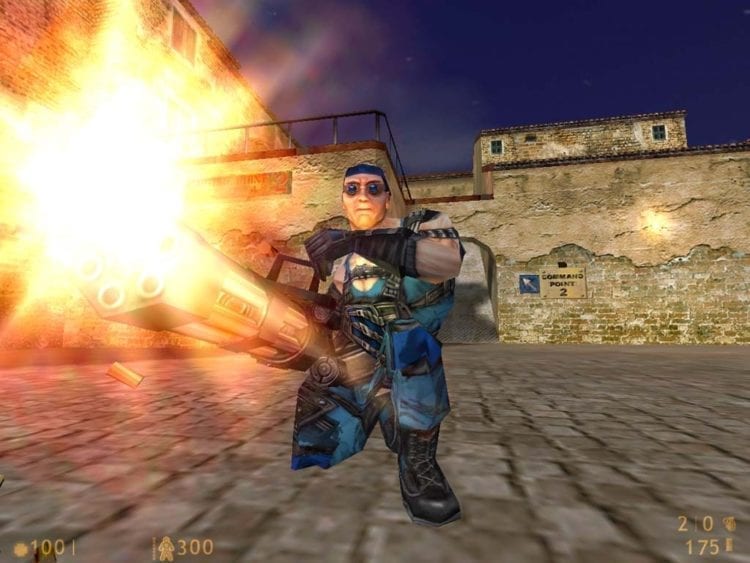 Modding was around well before Half-Life even released in 1998. For example, the original Castle Wolfenstein had Nazi soldiers replaced with Smurfs. Both Doom and Quake, the other prominent shooters also had vibrant modding communities. However, it is with Half-Life that modding reached new heights. Mods would become not just commercially viable, or as a means to engage with communities and hire skillful programmers. Sometimes they would surpass the base game.

Half-Life led to mods such as Day of Defeat, Team Fortress, and They Hunger. More resources and offerings came from a dynamic community that was eager to see how far they could take the game. Of course, the one that exceeded all expectations and defined what co-op gaming meant for years to come was Counter-Strike.

The mod, made by Minh Le and Jess Cliffe, which turned Half-Life into a multiplayer fragfest between terrorists and counter-terrorists, redefined competitive gaming. That mod eventually became a full-fledged game after Valve acquired the rights to it in 2000. In 2004, new versions such as Condition Zero and Counter-Strike: Source were released. When Counter-Strike: Global Offensive launched in 2012, it went hand-in-hand with the esports boom and game streaming. Global Offiensive now boasts hundreds of thousands of players and remains one the top games for professional leagues.

From the get-go, Counter-Strike’s earlier successes wouldn’t go unnoticed. Both Le and Cliffe would find themselves employed by Valve for their hard work. This move would become part of Valve’s overarching plan to engage more with the community and to cultivate talent.

Because of this accessible means of crafting mods, artists and programmers turned Half-Life into a playground. From then onwards, the train ride at the beginning of the game became a symbol for the modding community’s journey. Long-time fans and gamers would find the means to remake or reinvigorate an age-old classic.

For instance, Project Borealis, the codename for a fan-made third episode for Half-Life 2, remains an ongoing effort. When Half-Life lead writer Marc Laidlaw posted a blog story titled Epistle 3, which seemed to cover the plot for the game’s final chapter, fans couldn’t believe that they’d probably never play it. So, the 70-person Project Borealis team took it upon themselves to work on it using the Unreal Engine 4 instead of Source.

There’s also another project that’s been in the works for quite some time: Black Mesa. Developed as a faithful recreation of the classic by the Crowbar Collective, the standalone game allows current and future generations appreciate what to keep Half-Life offers. Through ups and downs for many years, they just kept on going. It is still in Early Access, but the team stated that it will be finished by 2019, illustrated by its newest trailer showing the Xen level.

What Half-Life Meant For Others

With Half-Life’s 20th anniversary, I decided to get in touch with gamers on Reddit. Many came forward and they felt that Half-Life provided something integral to their hobbies. Some recalled how it got them invested in FPS games. Others noted that it’s how they got into competitive gaming. Naturally, there were folks who simply enjoyed what Half-Life’s story provided, or how it became a social activity with friends. 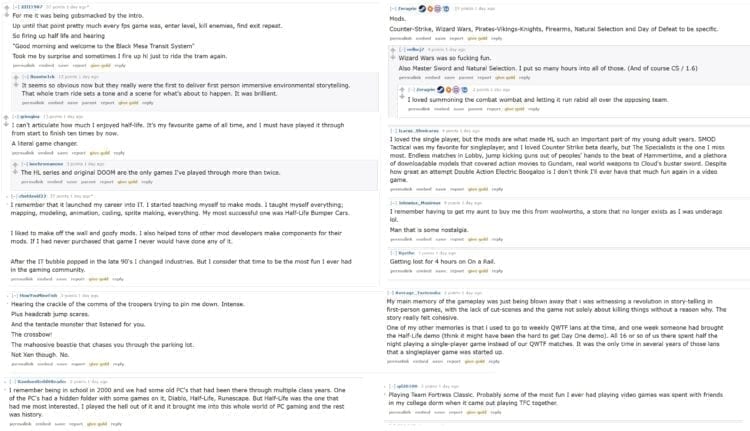 There were also gamers who found their true calling because of Half-Life. One of them is Reddit user 1leggeddog, who spoke about how much Half-Life influenced his career. He worked on various Half-Life mods in the past, including Half-Life Rally, Hostile Intent, Natural Selection, and even Counter-Strike and Team Fortress Classic. He’s also released his own mod called Xmas. Likewise, he mentions the painstaking process when creating 3D textures and models:

“Creating levels that fit in several game modes in Counter-Strike was especially hard to do correctly, but it was even more so when making maps for Natural Selection.”

Still, these complexities actually made the process more fun for him. Fast forward to later years and he mentions the strong influence that Valve’s game has had:

“Half-Life affected me in a huge way. It made me fall in love with digital art creation and drove my school choices towards becoming an IT professional and a 3D artist.”

He still works in the gaming industry as part of the dev teams for the Assassin’s Creed series, The Division, and Call of Duty. He owes a lot to Half-Life and the opportunities it provided to further his creativity. Lastly, he tries to push for certain features in the games that he’s had a hand in developing due to the lessons he learned from Half-Life’s modding scene all those years ago. 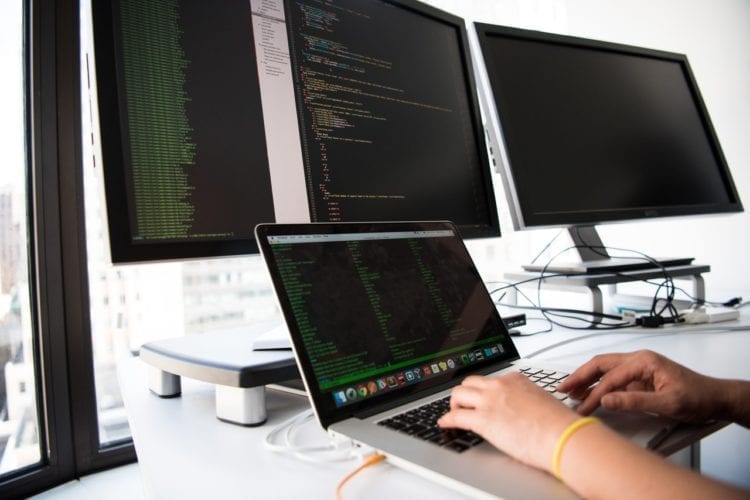 The Future Of Half-Life

As for me, Half-Life led me to discover the joys of an FPS driven by narrative design. Likewise, it also led me and my college friends to spend countless hours in LAN cafes playing Counter-Strike 1.1 to 1.3. I kid you not, but I actually won multiple local tournaments here in the Philippines in the early 2000s. I was living the life of a competitive esports gamer before esports was even cool.

I’d like to think there are so many others out there who have been influenced by Half-Life and its mods in some way. Competitive players, journalists, community managers, designers, and developers — everyone who at one point in time either put on a virtual hazard suit or blazed through the enemy Counter-Strike team with a Desert Eagle.

In turn, what we learned from Half-Life changed the way we approached this little hobby of ours. Some found a means to earn, and some to grow. Some ended up parlaying it into a successful career.

Although an official third game remains unlikely, long-time fans and modders still devote their time, money, and energy to see their fruits of labor come to fruition. While fans continue to wait for Valve to make any sort of announcement, Half-Life’s future remains bright. That’s because of its rich and storied past as a playground for modders and aspiring developers and the support of fans who consider the franchise as something that made gaming meaningful.