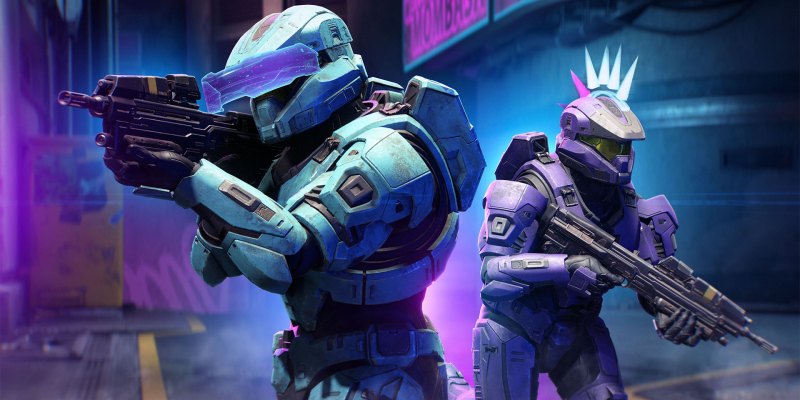 Halo Infinite received two major updates today. A new event is underway, and the shop has seen some much needed changes. For fans, this just might be enough to bring players back around to the ailing game. Today, the Cyber Showdown event begins in Halo Infinite, bringing some bright, neon colors and other cosmetics to the field. But if a glowing blue and purple mohawk doesn’t do it for you, the Halo Infinite shop is now cheaper.

For the latter, it’s the news players have been waiting for since the game’s multiplayer launched into beta. Halo fans and, hell, even members of the 343 Industries team have bemoaned the awful cost of in-shop cosmetics. Last week, Jerry Hook, head of design at 343, took to Twitter to tease pricing changes. Beginning today, the company is making cosmetics cheaper to purchase in Halo Infinite’s in-game shop. If you mosey over to the store now, you can note how much of a difference it really is.

A couple of months ago, the store would have presented a different scene. The Zvezda Armor Set bundle was going for 2,000 in-game points, which translated to $19.99 USD. It’s a lot of money, especially when you consider that the Battle Pass costs half as much. A helmet attachment was $10 USD, with XP Boosts and Challenge Swaps on sale for $2 USD.

With the start of the Cyber Showdown event in Halo Infinite, prices for cosmetics in the shop are notably cheaper. The Neon Superfly bundle, for example, applies the slick look to both the Yoroi and Mark VII armor cores. It also comes with a Legendary visor, weapon coatings for the Assault Rifle and Battle Rifle, and vehicle coatings for the Wasp and three Warthog variants. And it goes for a more reasonable $12 USD. 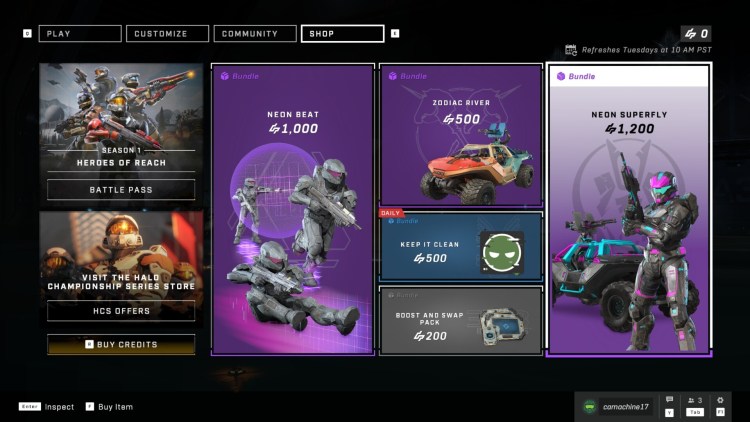 Things are looking a bit better

But what about the event? Well, if you wanted to paint your Spartan in vibrant neon pinks and blues, well, today is your day. The Cyber Showdown event brings a new Slayer type to Halo Infinite. Attrition is a four-on-four Slayer mode in which you share lives with your fellow teammates. The team that loses all its lives is defeated. In a twist, you don’t die right away when you’re taken out by an enemy. Instead, you get downed, and can be revived by any of your allies. 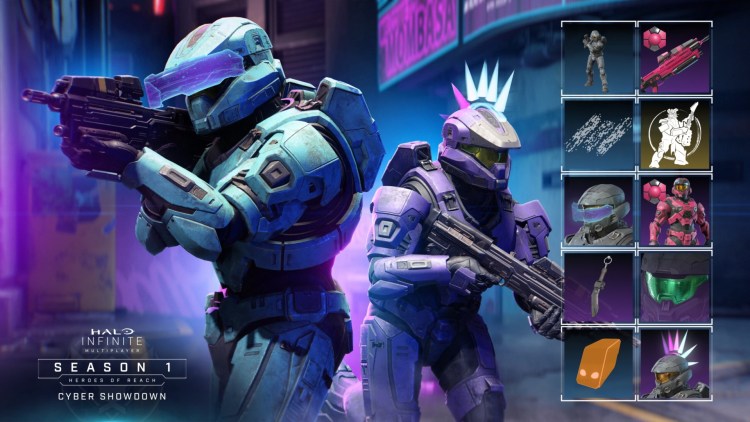 There are 10 Event Challenges bringing 10 cosmetic rewards. And yes, the neon mohawk is absolutely a thing. Despite what some players have said about the ancient warrior cosmetics in The Master Chief Collection, you know everyone is going to rock this thing. It should also be noted that 343 is keeping its promise to not fill up rewards with XP Boosts or Challenge Swaps. It’s cosmetics, baby, all the way down (see above).