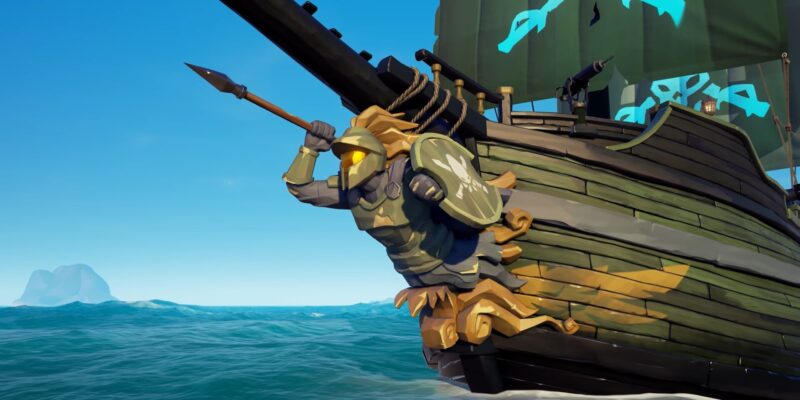 Today is both Xbox and Halo day, and Microsoft has been dropping a lot of awesome stuff for the latter. Earlier today during the Xbox 20th anniversary event, the Halo TV series got a tease, and it was announced that the Halo Infinite multiplayer is now live. One final piece of news has been floating around like flotsam, though. Before all the big news landed, Microsoft and Rare revealed that Halo items are returning to Sea of Thieves.

It was over two years ago when the Master Chief set sail. The Spartan Ship set hit the open waters back in June of 2019. Sporting a Master Chief Figurehead and UNSC sails, the Spartan Ship brought Halo items to Sea of Thieves in handsome fashion. These were event items, though, and those who didn’t claim them before the time was up were out of luck.

Today, however, the Spartan Ship set returns, and it’s not alone. Next week, anyone who plays Sea of Thieves will receive the set. But on December 1, Rare is also releasing the Noble Spartan Sails and Flag set, which are adorned with glowing, crossed cutlasses and an Elite skull. It certainly dregs up memories of playing the games in Legendary, to be sure.

The Chief is in the Navy, technically

Rare is mostly pushing out the new sails, but it’s cool to see the set become available again. You can get the ship set by playing Sea of Thieves from November 24 at 7 AM ET to December 1 at 11 AM ET. After that, playing the game will net you the Noble Spartan Sails and Flag, starting December 1 at 7 AM ET until December 8 at 11 AM ET.

As mentioned, there was other Halo news that came out earlier today. The Halo TV show is coming to Paramount+ in 2022. Also, the Halo Infinite multiplayer beta is live and will launch fully on December 8 alongside the campaign.