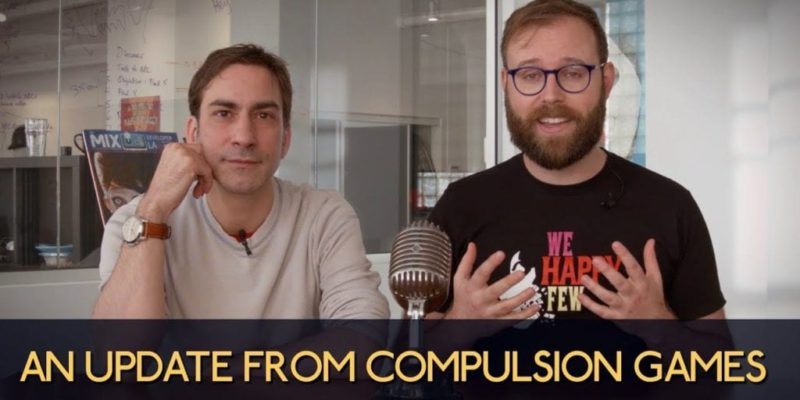 Compulsion Games had planned on getting We Happy Few out of Early Access and into the hands of gamers in April. The plan has now changed and the release has been pushed back to summer to allow for extra development time.

With the game now delayed, Compulsion has looked hard at the pricing and player feedback during Early Access and are now offering unconditional refunds to anyone who thought the pricing was unfair for what was on offer during this development phase.S

We have also received feedback that some Steam players felt the new pre-purchase asking price didn’t mesh well with the game being categorized as Early Access. Given all the content we have yet to reveal to the public, we can see their point. That being said, we’ve done a huge amount of work and the scope of the game is substantially increasing over what’s there right now, which is a very unusual situation for Early Access games, especially as we have a retail release on the way. What you guys see right now is definitely not what we see internally.

So, we find ourselves caught between Early Access (where it’s important to have a price that reflects the current game) and the eventual release of the full game with increased scope (which we believe reflects a traditional retail game). We had anticipated that Steam players would be okay with pre-purchase still granting early access, but since we won’t be offering any additional early access updates beyond August’s “Life in Technicolour”, we think having this labeled Early Access and charging the price of a larger game caused more confusion than we had hoped.

We want to make sure everyone who plays the game is happy, so alongside our revised release date, we are doing two things:

1) Enabling refunds for all players who purchased on Steam, past and present, regardless of playtime. We’ll continue working to make sure 1.0 is great and something you’ll be happy buying.

2) Temporarily disabling the buy button on Steam as of the end of January, 2018. We don’t want new players to have the same frustration, so we’re temporarily disabling the option to buy on Steam, and will re-enable the buy button once we’re closer to launch when more info and materials on the game will have been released, giving players more clarity on what they can expect in the full version of We Happy Few.

According to Compulsion, what players see now in the We Happy Few Early Access build is not an indication of what the final game will look like. Watch the video below for more on the plans and it comes with a snippet of content gameplay footage.