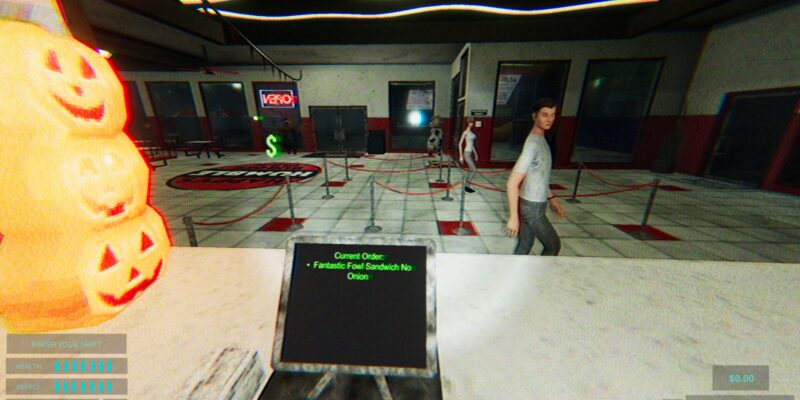 Happy’s Humble Burger Farm is a hard game to critically evaluate. It’s a sequel to a free hour-long experiment and, best I can tell, the gameplay is bad on purpose. It’s a combination restaurant cooking and horror game with a lo-fi aesthetic and a lot of unique, bizarre choices. The world itself is compelling and, yes, it can be fairly freaky at times. However, many of its gameplay choices can make playing it a chore for anyone who actually wants to take the cooking sections seriously. The game is absolutely not for everyone, but the question stands: is Happy’s Humble Burger Farm worth it?

Before jumping in further, I want to explain why this is an impressions piece and not a review. During the review period, the game pivoted to a playtest and my save was deleted. I figured the playtest was obviously not the final build of the game, plus I didn’t want to lose another save file, so I waited. A week or so before launch, the playtest ended and the game became a single bit on my SSD. As far as I know, it didn’t unlock again for me until the day I wrote this. As such, these impressions are based on the first few hours of the game and focus on the cooking aspects. Granted, the game will very likely completely pivot away from those at some point and become something much more experimental and strange, so the cooking might not even matter.

The game begins with your character on an operating table as a mind-control device is placed in your head. The two surgeons discuss the operation, but then pivot to a more important topic: lunch. Before you know it, you wake up in a crummy apartment and you’ve been hired by the titular fast food restaurant. Also, much of the world around you may not be real. You’re meant to go to work at the restaurant. But Happy, the cow depicted in all the advertising surrounding the chain, is a living being. If you mess up at your job, Happy will murder you.

Before work, you need to actually walk from your apartment to the restaurant. There’s an area between the two with all sorts of things to find. Cassette tapes detailing lore, tokens that you can use to improve the restaurant, and optional boss battles. Or at least one. You can freely explore the area at your leisure, as Happy’s Humble Burger Farm isn’t in real time. There are couple of buildings other than your apartment that can be entered as well, such as a shop that lets you steal things from it and sell them back to it, and a coffee shop. 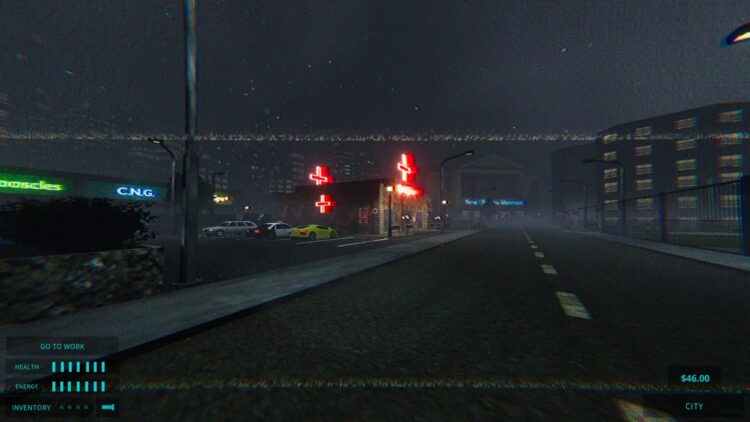 You sure that’s cooked?

Unsurprisingly, most of your time will be spent at the restaurant. At least, early on. You’ve probably played a game similar to Happy’s Humble Burger Farm‘s cooking gameplay before, whether it be Cook, Serve, Delicious or Diner Bros. To be blunt, it’s the worst of its sort in that regard. The game barely explains most of its mechanics. Happy’s restaurant is jampacked with illogical annoyances meant to make your time spent more tedious. You have to clock in and then run to the entrance to turn the sign on to start your shift. Customers enter, and you’ll take on an order one at a time, in which you have two minutes to complete.

You can’t prep much before your shift starts, as you have to start said shift before you can turn the appliances on. The game doesn’t tell you this until you go to start prepping. Appliances and the kitchen lights will both turn off randomly while you’re cooking, and you’ll need to stop what you’re doing and go hit the switches to turn them back on. Which the game doesn’t tell you. There are also enemies that explode or obstruct your vision. Some will sneak up on you and hit you in the back while you’re cooking. It’s eerie and tense, sure, but awful from a gameplay perspective. Also awful is that it can be hard to tell if patties are even done, as the textures don’t make it particularly clear at times.

Speaking of awful, there are no UI tips telling you about the orders. You have to go and look at the register to see them. There are three different kinds of patties to cook, two fryables, two types of drinks, cookies, and pies to keep in mind. Happy’s Humble Burger Farm has nothing to let you know how long it takes for the patties to cook, so you’ll have to watch for when the texture changes. Mistakes will inevitably lead to you having to sometimes throw out burnt patties and start over. And that also means getting an infraction! Yay! 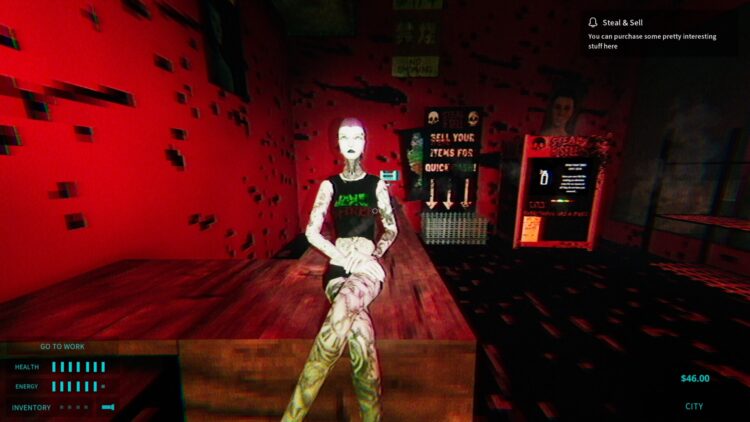 It’s hard because it’s bad! Get it?

You’ll also end up messing up orders because the appliances will turn off while you’re busy, costing you precious seconds where the food isn’t cooking. Exploding enemies can destroy finished burgers, too. You have a health bar and, if it empties, you die and have to start the shift over again. Every time you fail to complete an order within the time limit, an infraction is added. If you get three infractions, Happy shows up and attacks you unless you’re able to make her a rotten sandwich without dying. But she’ll attack you while you attempt to make it, which is tedious and aggravating.

Tedious and aggravating honestly very much describes the cooking in Happy’s Humble Burger Farm fairly well. Oh, and burgers require all toppings by default and orders will specify that the customer would like them sans a specific topping. If you hand in an order with one wrong topping, you have to start it over from the beginning and you get an infraction. Once you put food in a bag and close it, you can’t open it again. You can also choose to do identical daily chores each day, but, if you die, you have to do them again. One of these involves throwing a bag in a garbage can, which only works a fraction of the time.

Between the enemies sneaking up on you and the kitchen going haywire, it’s obvious that the game wants Happy to show up and kill you regardless of how well you’re playing. You may as well be constantly getting hit by blue shells a la Mario Kart. Pure artificial difficulty. It’s an atmospheric horror game first and foremost, but the gameplay is merely a means to an end. Whether or not Happy’s Humble Burger Farm will be worth it for you hinges on if you’re willing to deal with bad gameplay to take in the whole experience. For me, the endless annoying frustrations of trying to play the game aren’t outweighed by the interesting ideas and compelling world on offer. But many people won’t care. They’ll understand what the developer was going for here.

To put it simply, if you want a creepy, unique horror game and don’t care about actually enjoying yourself, Happy’s Humble Burger Farm is worth checking out. But don’t buy this because you want a fast-food sim with some horror on the side. The gameplay is horrible. Also, the UI looks dreadful, but I feel like that was also on purpose, maybe? Granted, the gameplay isn’t the point and is more of a smokescreen than anything else. But you can choke on smoke all the same.

By Joshua Chu23 mins ago
Previews