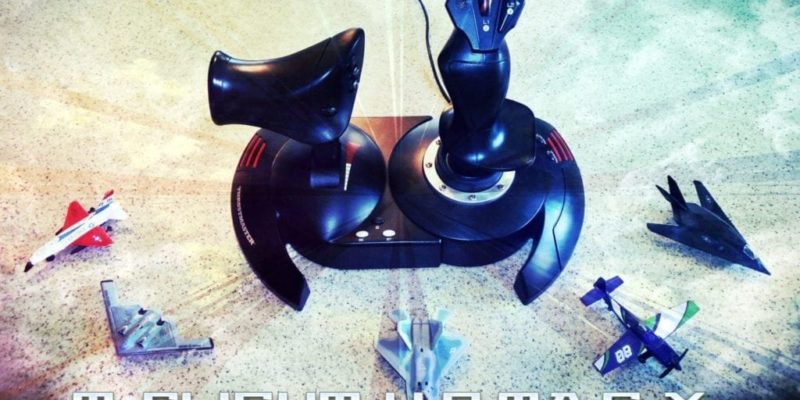 DISCLAIMER: This controller is compatible with both the PS3 and PC, however, this review is based on usage on a PC.

I’ve been a gamer for practically all my life and if there’s one genre that I’ve always loved, it’s definitely simulators — flight simulators to be exact. I’ve always been fascinated by the concept behind airplanes, so much so that I’m aspiring to be a pilot later in life. But for now, I’m more than satisfied with reclining in the couch and putting in a few hours of flight-simming each week. There are many gamers out there who are flight-sim enthusiasts just like me, and ask any of us — joysticks are life.

The level of control that a joystick (or even more so, a flight yolk) offers is unprecedented. While regular gamepads work great for racers, and the keyboard-mouse combo are snappy for FPSs, there’s nothing like having a great joystick to control your virtual steel bird. There are myriads of joysticks out there, all different sizes and brands. Today, let’s take a look at one that even though it has a bit of age on it, it gets the job done.

This particular type of joystick is a step-up from the usual offerings, better classified as an entry-level controller to the advanced league. So what makes it so great? Let’s find out!

?DESIGN & BUILD QUALITY:
At first glance, the TFHX can excite some. Thrustmaster is known for making professional-looking products, however, the TFHX was given a slightly more ‘arcadey’ look. It’s edgy. To be more specific, it looks like the perfect fit for a commercial for an arcade combat-flight simulator. It has an edgy, slightly exaggerated look. While it does look noticeably different from Thrustmaster’s other products, that isn’t really a minus. Seeing that is an entry-level joystick, this design choice makes sense. And because it’s an entry-level joystick, the build quality also matches its class.

The entire joystick is made out of plastic, a common choice of material for the cheaper sticks. However, don’t let that fool you. Thrustmaster is known for quality products after all, and the TFHX doesn’t disappoint. Despite the heavy use of plastic, the stick feels quite sturdy, especially since it has a weighted base, which will keep it in place whether it’s sitting on a desk or your lap. In addition, the main stick is bolted down with a metallic foundation, adding to the overall quality. I found all of the buttons are very ‘clicky’, aside from Button 3, which I found to be strangely hard to press on more than one occasions. On a more positive note, the main stick feels great, as well as the throttle quadrant. We’ll be looking into them a little more in just a minute.

In the end, the TFHX is a pretty well built stick. Thrustmaster has managed to keep the price reasonably low by making it almost entirely out of plastic, but even so, they didn’t cut corners when it came down to the stick’s strength. The weighted base keeps the controller in place, giving it an extra feeling of security. This in addition to the main stick being secured by a metal foundation adds to the overall level of quality that can be expected by Thrustmaster.

What does the abbreviation ‘HOTAS’ stand for, exactly? ‘Hands-On-Throttle-And-Stick’. This is what sets the TFHX apart from the ‘common joystick’. It features a fully functional flight stick, as well as an independent, ergonomic throttle quadrant — just like real life aircrafts. This is what sold me in the first place. All of the joysticks I’ve used prior have featured a simple ‘throttle slider’, which although not bad, doesn’t feel nearly as great as a full-sized throttle piece. What makes it even greater, is the fact that the unit splits into two, over a span of about a full-sized keyboard. That means if you really want to get the ‘as real as it gets’ feeling by having the throttle off the side, you can. However, I always keep the two halves as one, as I find it more comfortable that way.

Regardless of whether you keep them together or not, each half of the unit is fully loaded with a series of buttons, counting a total of 10 in all. All of the buttons are neatly positioned around the unit, making for easy accessibility. You never have to shift the position of your hands, which is great especially for those inevitable tense moments when flying. The main flight stick features full 360-degree movement, as well as a twist-axis. In addition, it also has an 8-way HAT switch. The stick feels great, mainly due to the fact that you decide how it feels. At the bottom of the unit, lies a resistance-knob. This knob allows you adjust whether you want the stick to be loose or tight. This level of customization is great as everyone has their own tastes. Looking at the throttle, not only is it great to have it detachable but it also has a rotation-axis. That’s right, you can taxi or roll with both the stick and the throttle, if you choose to. Another great thing about the throttle quadrant is that it has a stopper at exactly the half-way mark, making throttle-level adjustment ridiculously easy. So, if there’s ever a time you want to hang at exactly 50%, you don’t have to spend time trying to line it up yourself. The  TFHX also features a “dual-axis” mode, which allows the throttle’s ‘slider’ to be used as a second twist-axis, or a completely independent axis. Once again, a great addition of customization. To add to that fact, the entire unit has its own internal memory, allowing you to customize each button independent from the program.

With all these great features, is there anything wrong with it? To be honest, no. Any problems that you may find with the TFHX would fall under the category of ‘personal gripes’ more than actual problems. The only thing that I can honestly say that’s ‘off’ about the features, is that I wish there were more buttons. Flight simulators use almost as much key-combinations as a real-world cockpit. While the 10 buttons can go long way, I couldn’t help but wish there was a few more. I found this problem especially apparent when playing FreeSpace 2, as there are a lot of tense moments where quick thinking and reacting is a must, yet, my concentration would constantly have to swap between the joystick and the keyboard. Nevertheless, like I said earlier, this would fall under the category of a personal gripe than an actual problem.

Overall, Thrustmaster outdid themselves with this flight stick. With two rotation-axes, completely programmable inputs, resistance control and the ability to separate the two units, the TFHX has a commendable amount of great features.

While it may be one of Thrustmaster’s lower-end products, the TFHX is no cheap play-toy. It’s an affordable first-step into the more hardcore side of flight-simming. While its quality and feature-set is nowhere near more expensive sticks, that is to be expected. The level above the TFHX is where you’ll be spending hundreds of dollars. The TFHX can be picked up for less than $100, depending on where you look. However, considering that it was released all the way back in 2008, its price has inflated. I was able to score it used in almost-perfect condition off of eBay for $45. On the other hand, Thrustmaster’s official Amazon page has it going for a whopping $150, $95 more than what I paid. Now you’re probably wondering, is it even worth that much? Look at this way, Thrustmaster’s HOTAS Warthog, the successor to the TFHX, starts at $299. How does that price sound now?

In the end, the TFHX is still one of the most affordable sticks you can pick up. Thrustmaster took time to use economical materials, without sacrificing build quality, not to mention the stick’s series of great features also enhance the package. You’ll definitely be getting your money’s worth with this one.

The Thrustmaster T-FLIGHT HOTAS X is hands-down, the best entry-level HOTAS stick you can buy without completely breaking the bank. It’s great for simmers who are looking to step up from the ‘common joystick’ but aren’t ready to take the full plunge to a full-feature stick or flight yolk. Thrustmaster’s signature quality continues here, making for a well-built unit with a great set of features. The stick is riddled with aspects that you can adjust to your own, specific likes. From the ability to separate the two halves, to the resistance-control, dual-axes mode, and programmable keys — the TFHX encourages you to make it your own.

Having moved from a Saitek AV8R-01, the experience I’ve had with Thrustmaster’s stick has left me more than satisfied. I use the joystick several times each week, and the level of enjoyment is amazing. The feeling of blasting the engines of a 737 as it barrels down the runway is made all the more better with the throttle quadrant. The resistance control has enabled me to get the precise control needed for the more difficult flights in Microsoft Flight Simulator: 2004 , and the freedom I needed for the high octane interstellar battles in FreeSpace 2. Having the buttons in finger-reach is more than appreciated, which makes quick inputs a breeze. Not to mention that slider on the throttle just feels so right when taxiing a 747 to its arrival gate.

Get an up-close look below!

Here is the video review to see the HOTAS in action!

Nosgoth update 4.0 takes you to the Crucible

The Sims 4 Get to Work trailer promotes trouserless employment

By Kevin Foley55 mins ago
Hardware