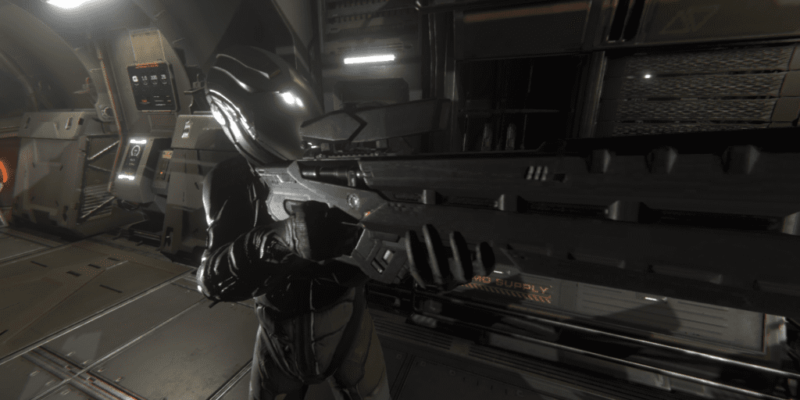 Developer Zero Gravity is just about to launch their space survival title Hellion into Steam Early Access. We caught up with Zero Gravity’s Co-founder and Creative Director Marko Smiljanic ahead of release.

PC Invasion: What is Hellion exactly?

Marko Smiljanic: Hellion is more than just a game for us at Zero Gravity, since we all grew up playing computer games. To finally become a part of the gaming industry is a dream come true for many of us. In a nutshell, Hellion is a first person, multiplayer, space survival game and a fusion of space simulation and survival genres that pits players against the deadly environment of space and each other.

PCI: We have seen a resurgence in interest for space sims over the past couple of years. What prompted you to develop Hellion?

MS: Hellion had existed as an idea even before Zero Gravity Studio was founded, we simply didn’t have the resources to turn that idea into reality until 18 months ago. The revival of the space sim genre in recent years definitely encourage us to move forward with the project. 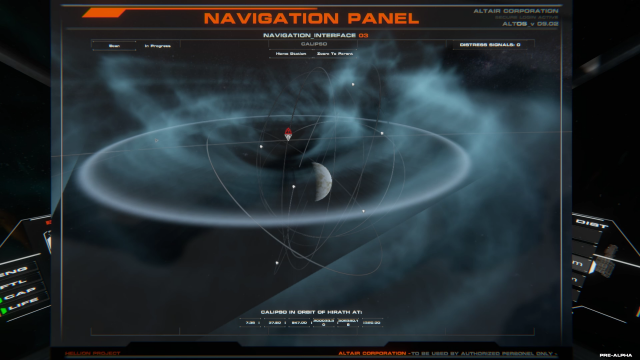 PCI: There’s a lot of “survival” games on the market, what makes this one stand out from the crowd?

MS: For some reason attention to detail comes to mind. Most of us are huge fans of sci-fi, regardless of the form. We devour movies, series, books, games, etc. We are also huge fans of survival games, so the combination of space and sci-fi setting in particular, the focus on space rather than ground along with the realism with which it’s done are probably the major selling points of this atypical survival game. Another thing not common in most survival games would be a powerful background story that players can explore at their own pace.

PCI: There’s no doubt the game will appeal to fans of space games, but it is set in one system of space. How big is the game and how much is there to explore?

MS: 6au, or around 897,600,000km of space. In Hellion we want players to realize just how big a single solar system can be. There are many sci-fi settings set across tens or even hundreds of solar systems, some have gone so far to use entire galaxies. With these numbers players often forget that all of human history occurred on a planet that is only 12,742km across. It is not so much about how big it is, but rather, how interesting can it be? 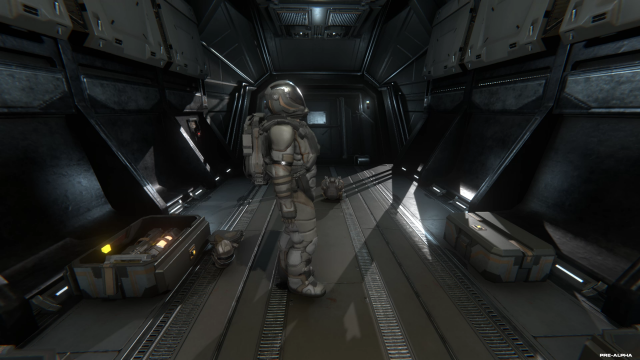 PCI: You put a large emphasis on Newtonian physics. How will that play a part in Hellion?

MS: Hellion as a system is entirely governed by the laws of Newtonian physics, there are 7 planets and 11 moons that are constantly in motion. Same holds true for all in-game objects like asteroids, ships and stations. As a result, space feels dreadfully real and intimidating. Another thing is seamless transitions between standard and zero-g environments that present players with an entirely new dimension of gameplay.

PCI: How realistic have you tried to make the game? Can players expect a lot of micromanagement?

MS: Right from the start, we wanted to make Hellion as realistic as possible without damaging the gameplay. We believe realism adds a lot to the immersion factor and allows players to react intuitively when dealing with problems like, decompression, loss of power, etc. There is quite a bit of micromanagement but it is still within reason. We are also aware that too much realism can impact the game in a negative way and take away from the fun so when we have to choose between realism and gameplay, we will always go for gameplay.

PCI: Resource gathering plays an important part in survival game mechanics, but how are you making that interesting for players? Hammering away at an asteroid for resources may be perceived to be a little dull. 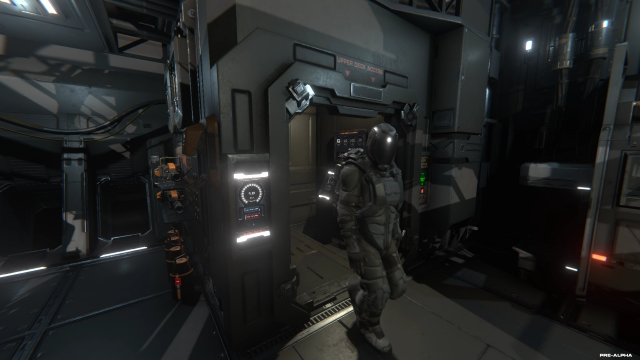 MS: Spending hours doing mining, although fun at first, quickly grows old. That is why mining is only one of the ways how players can obtain resources needed for survival. Exploring derelict ships and stations is another, while raiding other players or trading with them opens up a whole new avenue. Also not all resources can be harvested, various system components can only be obtained via exploration and salvaging.

PCI: Let’s talk ships. What exactly will be available to players and how in what ways will they be able to improve and modify their ships? How different can players make ships so they each ship feels unique to the player?

MS: Initially at early access launch players will only have access to a multipurpose utility craft, also known as “the shuttle”. Other ships will become available shortly after launch. In the future our goal is to make every ship in the game feel unique, rather than an improved version of the old one. Each ship will bring a whole set of new options to the player. In terms of “uniqueness”, players will not be able to “just build” or “purchase” a new ship, instead they will need to find a derelict ship and repair it. Restoring one of these broken relicts will not be an easy feat and will require a lot of work and possibly several people banding together. This creates the feeling of “rebuilding something” and the time and effort you invest will make it feel truly yours. 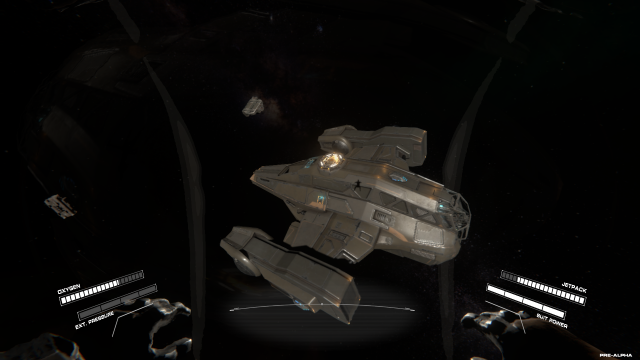 PCI: Multiplayer will play an essential part in keeping players engaged so how will that work as far as teaming up with other players, servers, max players per system etc. is concerned?

MS: Space is a rather hostile place and surviving on your own in an environment where even the slightest mistake can be your last would break even the most determined individual. Having someone you can rely upon and who can help out should something go wrong goes a long way in making the void look less threatening. As for the technical aspects, players will have an option of inviting friends to join them at the start, or share the coordinates of a location in order to meet with others. In terms of servers and number of players per server, we aim for around 100 people per server. Of course, this number may change based on feedback and optimization. Hellion will also feature dedicated public servers, privately rented servers and individually hosted private servers.

PCI: Hellion does have a story but how will that play out? Will there be an actual end-game goal?

MS: At the heart of Hellion lies a mystery behind the largest disaster in known history. While playing, you will come across bits and pieces of information that can help you reconstruct the events that led to Expedition’s downfall. Our goal is to deliver a compelling story where logs reveal only partial information and the environment tells the rest. These fragments are often more than just bits of compelling lore. They can provide clues to previously unknown locations that might contain advanced equipment or powerful weapons and other relicts of the past. Exploring these locations will not be an easy task, especially since some may have value well beyond the loot you can find. You might just find yourself engaged in conflict with other survivors for control over these places. Of course, no one can force you to go down that rabbit hole, but in ignoring it you do so at your own peril. 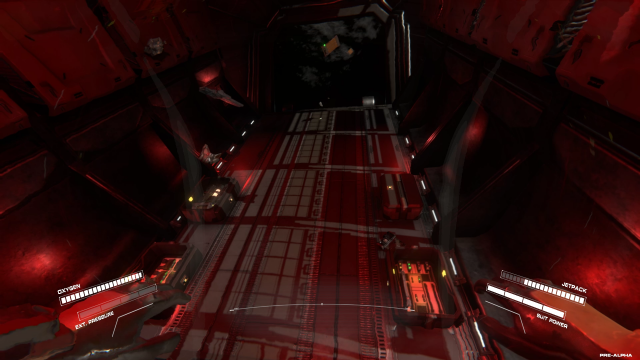 PCI: Multi-crew features are always popular with players who don’t want to go it alone and Hellion supports this. How exactly will that work and what kinds of roles will players be able to take up as part of a crew?

MS: We do not really want to force players into any particular role, or divide them into professions. Instead, we expect that people will divide roles according to their affinities. Some may find that piloting and navigation are right up their alley, while others may feel right at home during EVA and zero-g activities. On the other hand, there are always those that prefer to shoot and ask questions later, and people who will always find the best way to use (and abuse) every weapon in every environment. Sometimes just having another person around to assist can be a big help. In addition, the equipment that you can find will warry, some items may be better suited for a certain job than others, so it becomes a matter of finding the right person and obtaining the right tools for the task at hand.

PCI: What kind of out of ship PvP combat will there be against other players?

MS: Well, several and as we move further with the development we plan to expand these concepts. Players can freely engage in pvp, as there are no artificial restrictions to prevent them from doing so. Should you encounter another survivor during a salvage run, you can always let your guns do the talking. You can also attack outposts and bases belonging to other players and board their ships in search of resources, spare parts and other equipment. Another interesting option is using environment against others. Overriding an airlock door may cause a decompression that can blow invaders into space or throw them against the walls with enough force to take them out. Still pvp does not necessarily have to involve violence, you can always sneak in or deceive others and take what you need while they are attention is elsewhere.

PCI: With Star Citizen some way off from release, there are quite a few Star Citizen fans keeping one eye on Hellion. What would you say to them to get them to check Hellion out, and do you have any thoughts on the Star Citizen project?

MS: We knew this one was coming 😀 We are aware that many fans of Star Citizen are tracking Hellion’s progress and many often compare Hellion with Star Citizen. As flattering as that might be, Hellion is fundamentally a different game. Our scope is much smaller than SC and the focus lies in the survival aspect and the experience of being stranded thousands of lightyears from home. The tone of Hellion is also much darker, closer to a horror than an epic space opera. But, if you find a dark and dystopian future interesting and believe you can thrive in the most hostile environment known to man, then join us in an attempt to rebuild the ruined dream of mankind.

As for our thoughts, Star Citizen is indeed a massive project and in spite recent delays, our hat is still off to Chris Roberts and the people at Cloud Imperium Games. Some of us at Zero Gravity are big fans of the Wing Commander series and the space sim genre, so we jumped at the chance to back the project. We wish the best of luck to Chris and his team and are looking forward to playing Star Citizen when it comes out. 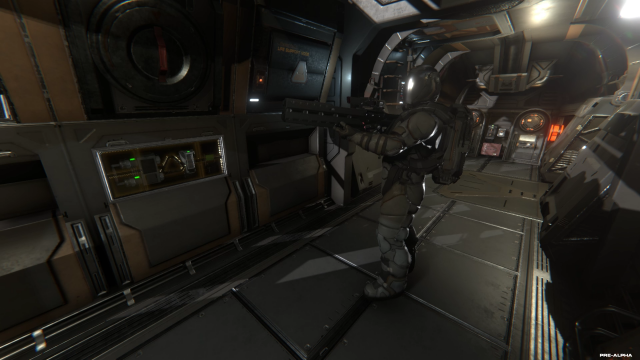 PCI: Finally, is there anything else you want to cover, a final pitch for why should players pick up Hellion when it enters Early Access?

We would like to invite all who haven’t had a chance to visit our website or steam page to drop by and check Hellion out, especially if they are a fans of sci-fi or survival games. We would also like to once more point out why we picked the early access model for Hellion. We are always interested in new ideas and suggestions and early access allows us to develop the game together with the community and react according to feedback we receive. Over the past 6 months we have received many suggestions and several have already been implemented.

Next Overwatch hero is teased as “unidentified assailant”

By Andrew Farrell6 days ago
Interviews

By Kevin Carignan7 days ago
Interviews