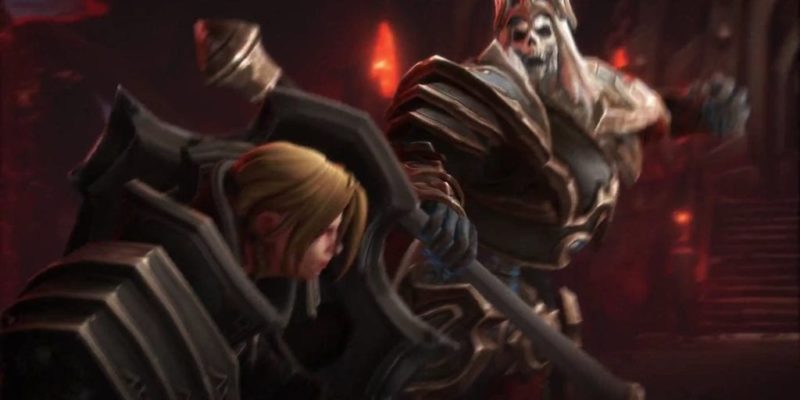 Blizzard have taken to the PC Gaming Show stage to discuss Heroes of the Storm and StarCraft 2: Legacy of the Void. I’ll get to the latter in a minute, but let’s talk about HotS first.

Heroes of the Storm‘s Eternal Conflict expansion, focused entirely on the Diablo universe, is coming soon (kicking off on 30 June, apparently, with a PTR appearance next week), and Blizzard’s Dustin Browder and Chris Sigaty have talked a little bit about what we can expect. Specifically, heroes.

The next hero in (after The Butcher, at least) will be King Leoric. His big thing is that he, uh… can’t die. I mean, he can die, but on death he simply turns into a wraith. While in wraith form he can’t inflict any damage, but all the damage he would inflict with his attacks will lower his death timer; when that hits zero, he respawns on top of the wraith, rather than appearing back in the base.

So no, Leoric can’t exactly die. Presumably you’ll still be able to use his wraith to scout around, and if a battle lasts long enough, the enemy team will have to deal with you twice.

His heroic abilities offer a choice between control and raw damage. Entombed locks players in place, creating a little tomb that forces them to stay in one place for awhile. March of the Black King, on the other hand, has him wander forward, swinging his weapon all the while. He’s Unstoppable while this goes on, inflicts a huge amount of damage, and heals with each strike.

Apparently, the big design choice here was his undying nature. Malthael was considered as a hero who could embody this trait, but in the end, they went with Leoric. Does that mean Malthael will pop up at some point? Eh, probably, but it’s not like Blizzard are hurting for lore characters to choose from.

The Monk is another revealed hero, but he’s much earlier in development. He’s a support character, and he looks like he’s going to be a very… unusual character. He’s mobile and agile; he can leap forward to attack enemies, then leap back to heal allies. More to the point, though, he can choose his own trait at the very beginning of a match, deciding whether to focus on healing or damage or what. It sounds like this will impact the talents he’ll have available to him, too, making him one of the more variable characters in the game.

Also, the Treasure Goblin from Diablo 3 will apparently be appearing in the first 30 seconds of matches, before the gates open, and killing him grants the team bonus gold… which is a bit odd, because Heroes of the Storm doesn’t have a gold mechanic. Is this tied to a map objective? Hmm.

The trailer for Eternal Conflict also showed a few other familiar faces. Did I spy the Diablo 2 Amazon lurking in the background? Hmm. Take a look at the trailer below and decide for yourself.

No Man’s Sky officially confirmed for the PC