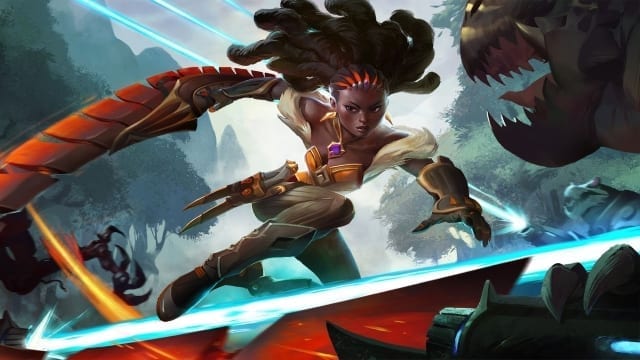 If you can’t get enough of Heroes of the Storm, you’ll be happy to know there’s a new Nexus Hero in town. Her name is Qhira, and she is a deadly bounty hunter, fresh off the boat from the Nexus realm of Iresia. She is a versatile and dangerous melee assassin, armed with a deadly Iresian Chainblade. This unique weapon helps ensure that she always collects her bounties.

Qhira used to be a knight in her now-shattered homeland of Iresia. Her prowess in combat is unmatched, and she also boasts an array of abilities that make her optimal for starting fights and ending them. Her playstyle is distinctive, with lightning-quick engages that deal high amounts of damage while the cavalry is on the way.

You can see Qhira in action in the Hero Spotlight video below. She can do all sorts of cool moves with that Iresian Chainblade, attaching herself to enemies and wreaking havoc. Her basic abilities include Carnage, Blood Rage, and Revolving Sweep. Revolving Sweep is when she attaches the Chainblade to enemies and stuns them. Blood Rage has both passive and active effects, dealing a lot of damage. Carnage has her cutting through a line of enemies with the Chainblade, dealing damage to all of them. You can check a full breakdown of her abilities on the official announcement.

Heroes of the Storm new skins

Qhira isn’t the only thing coming to this game, though. Blizzard has also announced the return of Warchrome Wastes skins as part of the Heroes of the Storm: Raiders of Warchrome event. These skins include Deathranger Nova Skin, Daredevil Roadrider Raynor Skin, Corrupted Archangel Diablo Skin, and Molten Diesel Speaker Nazeebo Skin. There’s also the Daredevil Helldorado Mount to ride in on.

Blizzard has also just released some improvements to ranked play in Heroes of the Storm. These changes coincide with the start of Storm League Season 1, 2019. Ranked Points will now directly map a player’s Storm League MMR, as requested by many players. It will also reduce the number of Placement Matches and feature a new Ranked Seasonal Questline.

You can see the full breakdown of all the changes coming to Storm League on the official patch notes.

Gibbous – A Cthulhu Adventure wriggling out on Steam and GOG today