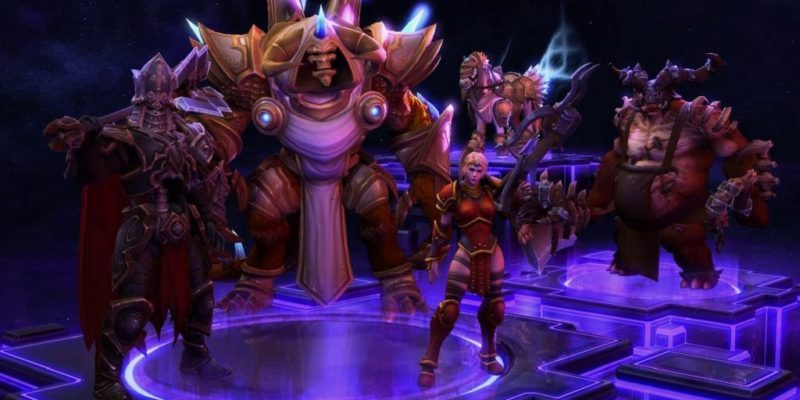 Heroes of the Storm has been patched, kicking off the game’s Diablo-themed Eternal Conflict event.

There are three big things with this update/patch/updatch: a new hero, a new battleground, and a new event.

The new hero is The Butcher, an Assassin class hero who gets more powerful the more he kills. Minions and heroes slain near him drop meat when they die, and each piece of meat The Butcher grabs increases his basic attack damage by 1%, up to a maximum of 25%. He can slow enemies, cause his basic attacks on a target enemy to heal him for 75% of the damage done, charge at foes to stun them, and – with his heroics – either inflict a huge amount of AoE damage after a three-second delay, or lock enemies down for four seconds.

The new battleground is the Battlefield of Eternity, a rather lovely looking map that showcases both angelic shininess and demonic… burniness? It’s a two-lane map based around two massive Immortals battling it out in the centre, with teams helping out to defeat the opposing team’s Immortal. Should one fall, the victorious team’s Immortal will be restored to full health and will head towards the lane with the most remaining defenses in an attempt to kick the crap out of everything.

You’ll be seeing Battlefield of Eternity quite a lot. For the next week, all game modes except Custom Games will be limited to Battlefield of Eternity, Sky Temple, Tomb of the Spider Queen, and Cursed Hollow, to ensure that players can get into the new map regularly. Every other battleground will return to the pool on 7 July, which I’m looking forward to, because I bloody hate Tomb of the Spider Queen and not just because it has spiders.

Finally, Treasure Goblins will be appearing at the start of matches before the gates open. Every day, players will receive a Special Event Quest to slay a Treasure Goblin; killing one of the little buggers while you have that quest will reward you with a free 100 gold. This is available to everyone, regardless of whether or not they’ve unlocked Daily Quests, but these quests will not stack: if you want to get the maximum gold out of it, you’ll have to do this every day. Still! A free 100 gold every day while Eternal Conflict is on? Not bad at all.

That’s the big stuff, but there are also a bunch of smaller little fixes and tweaks. The Healing column of the scoreboard has been replaced with “Role”, tracking healing done by Supports or damage received by Warriors. A “Daze” status effect has been added, which differs from Stun in that it doesn’t break channeled abilities, and a bunch of abilities now inflict this rather than Stun. A number of talents have been reworked. Shift-queued commands can now be used to enter/exit the Haunted Mines. Etc.

You can read the full details of this Heroes of the Storm updatch over on the official site. If you’re on the North American servers, you can play it now; if you’re in Europe, you’ll likely have to wait for tonight’s maintenance to add it.

Path of Exile: The Awakening gets 10 July release date