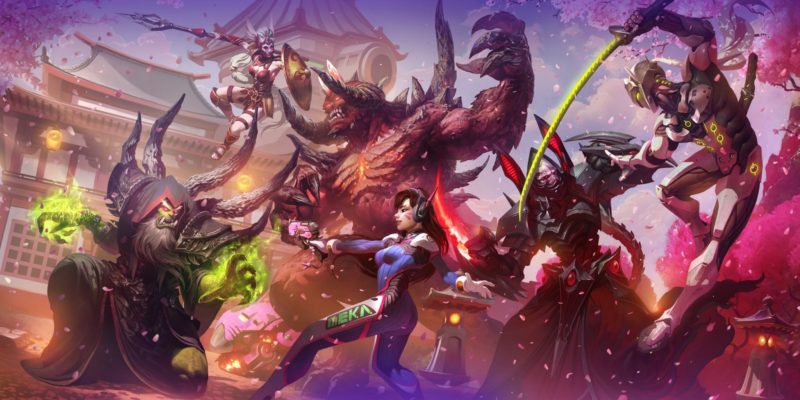 Heroes of the Storm 2.0 has just launched in the European region, bringing with it… well, hats, mostly.

While 2.0 sounds like an indication for sweeping changes to the gameplay, the biggest changes are really to the UI and the fluff. You’ve now got three units of currency – Gems (the “real money” currency), Gold, and Shards. Gems can be used to buy heroes, bundles, mounts, and all sorts of stuff; Gold is your hero-purchasing currency; and Shards are there for skins. Gold prices for heroes range from 2,000 for some of the oldest all the way up to 15,000 for the newest, while basic skins for heroes might cost 100 Shards while a Legendary skin will set you back 1600.

Loot chests are now also available for purchase, for levelling up your profile, or for fulfilling certain goals (playing two rounds of the Brawl game mode, for instance) and these offer a random smattering of stuff. If you’re lucky, you might get a hero or an epic skin. If you’re unlucky, you’ll get four sprays. Or three sprays and an epic skin for a hero you don’t actually own.

Lots of cosmetic fluff, basically, along with voice lines, sprays, emojis, new portraits, hero-themed announcer packs, and so on and so forth. Slightly annoying is that this appears to have split up the colours for each skin into different “purchases”: you can’t just buy the Love Bug Anub’Arak skin and get access to its red, pink, and green variants, for instance. All three are sold separately. On the one hand, I suppose this at least means you’re not paying for two skins you’re going to use, but…

There are gameplay additions as well, of course. Overwatch‘s Hanamura makes an appearance as a new map with a payload-oriented game mode, and cybernetic ninja Genji is available as a new hero to use, so now people can complain about needing to be healed while three miles behind enemy lines in games other than Overwatch. Korean mech pilot D.Va will also be making the move from Overwatch to Heroes of the Storm in the near future, it seems.

The other big change is to progression. Your total player level is now calculated simply by adding up the progression level you have with each hero, and that progression is no longer capped. Once agin, progressing earns you yet more stuff. I’ll apparently get myself a free rare chest in two levels, while in 17 levels I’ll get 150 Gems and an epic chest. So that’s nice. Equally, getting heroes up past certain ranks means yet more chests, with the contents specifically tailored to that hero.

Players who’ve already played a lot of Heroes of the Storm get plenty of stuff on login, too. From the looks of things you’ll get five basic loot chests, plus one epic chest for every 10 player levels, and a veteran chest (containing at least one legendary item) for every 100 player levels. That’s a very rough calculation based on what I got, because someone else I know who has nearly triple my levels doesn’t quite match up to that formula. It might be that chests take a little bit longer to earn past certain levels. Not sure.

For whatever reason, I’ve also got 1000 Gems for free, and those who log in before 22 May will also get 100 free Gems that can be spent on a one-off, mutually-exclusive “Mega Bundle.” There are four of these, each of which contains 20 heroes. In short, log in within the next month and nab yourself 20 Heroes, some of which are actually relatively recent.

There are still some kinks to be worked out, mind. Setting up individual hero loadouts is a complete bear, especially because this currently can’t be done within the Collection tab that actually shows you what you own, but it looks like Blizzard still have plenty of improvements in mind. I’m fairly sure we’ll be able to set a global announcer rather than individually choosing one for every single hero before long, for instance.

In any case, while I’m not sure this is really deserving of a massive relaunch and a 2.0 branding, it’s a pretty sizeable update to Heroes of the Storm. If you’ve played it before, this might be time to look at it once again; if you’ve yet to try out this rather more simple MOBA, then you’ll probably want to at least create an account and log in before 22 May in order to nab yourself a bundle of free heroes.

You can learn more about this newly launched Heroes of the Storm update (and, indeed, download the free-to-play game for yourself) over here.