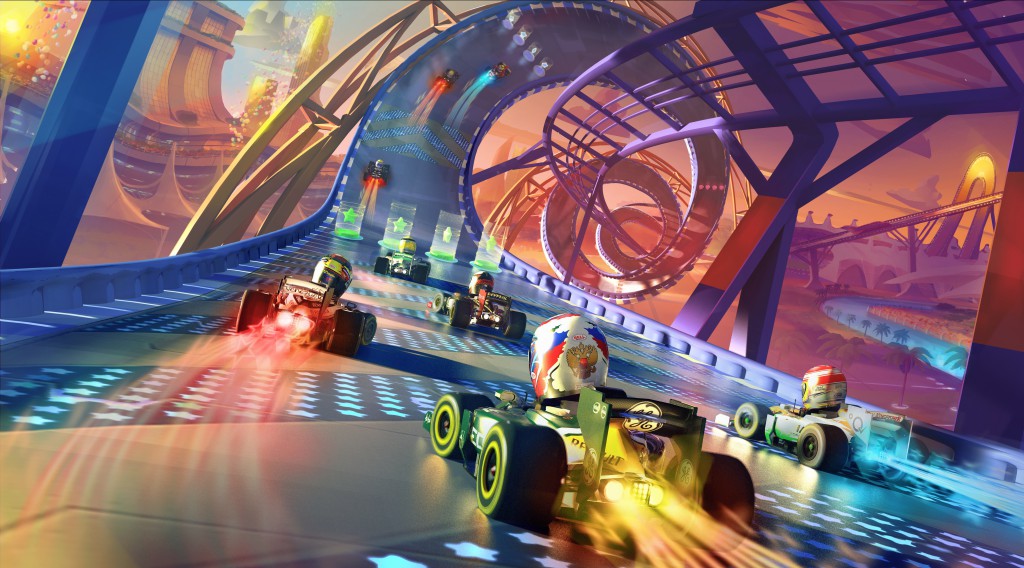 It’s 10am and I’m sitting in a room so small it would have made Anne Frank feel claustrophobic. I’d gotten about three hours sleep the night before, and rummaging through my bag in a blurry eyed attempt to find a pen I find a dirty sock, an unmistakeable white powder and more beer bottle caps than you’d find lodged up Duffman’s ass.

Evidence of a good night. Causes of a bad morning. The other journalists in the room are looking at me funny. I showered before getting here so it can’t be that I smell (although the sock can’t help), maybe it’s the eyes.

Anyway, I thought this morning would be an easy one: rock up, see some games, talk to some developers, go for a nap, go to a party, repeat for three days. This is a Formula 1 game, I like Formula 1. Seeing a new F1 game should be a fine way to banish the relentless drumming of my head.

Then the F1 Race Stars demo begins. A demo that, rather than providing a gentle start to the day, mimics the whacky and unpredictable loops that my fried brain is doing inside my skull. Sure, this is a game featuring the notoriously difficult to get F1 license but it’s nothing like sitting in front of your TV on a Sunday afternoon with cup of tea and custard cream in hand. 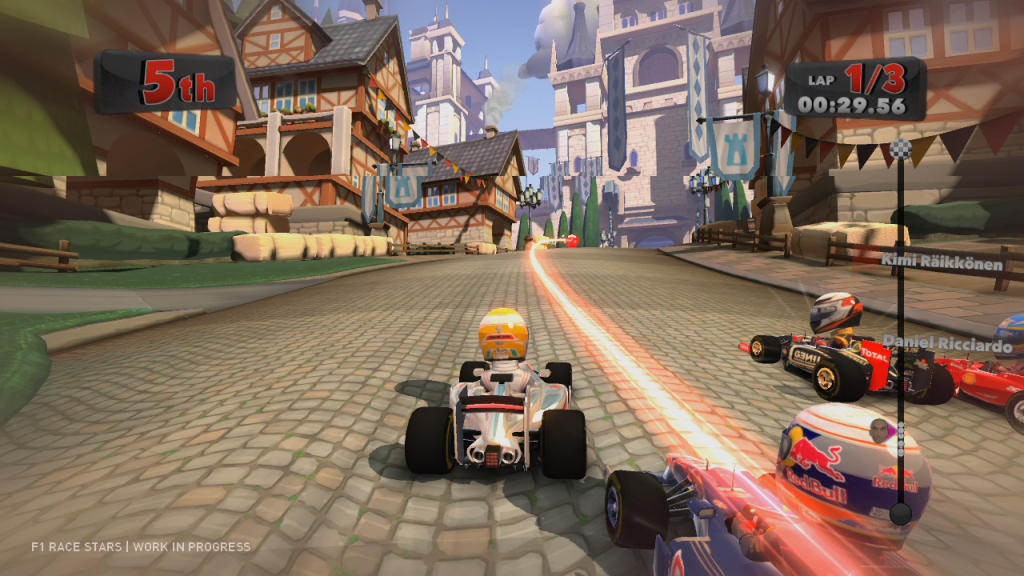 It’s got Lewis Hamilton, but he looks like Kryten from Red Dwarf – only with darker skin, more hair and trademark annoying smirk. It’s got Hockenheim, but hairpins have been replaced by 50-foot jumps and spectator stands with navigable fairytale castles. DRS and KERS are here, too, but I’ve never seen an F1 car turn silver and gain temporary invincibility when they’re activated.

In other words, this is no straightforward F1 game. F1 Race Stars is the bastard offspring of Mr. WipEout and Mrs. Mario Kart, with Bernie Ecclestone acting as godfather. An unusual combination perhaps, but one that has certainly gotten my interest.

Upon the demo starting, the Codemasters rep in charge of the presentation told me that the idea behind F1 Race Stars was to create something that could be described as “Formula Fun”. “What would Pixar do [with an F1 game]” is another way of looking at looking it, apparently. While both ‘mission statements’ are corny to the point of hard skin on your feet, I’ll let them slide; the intent to provide something fun seems genuine (rather than a quick cash-in). Plus, I’m a fan of F1 and racing games in general so I’m coming in hoping to like it, rather than looking for reasons not to.

Most elements of a kart racer seem to be present and correct. Heavily stylised characters in distinctive vehicles, ridiculous power-ups, tracks so colourful the Rio Carnival would look bleak in comparison and an emphasis on party play.

All of the F1 drivers from the current season are here, all with blocky heads, giant torsos and tiny little legs. It’s undeniably weird to see Ferrari’s Fernando Alonso activate a wet weather power up that makes everyone but him slide all over the place (a la Mario Kart’s lightning), but it does have a distinct and charming quality in that the real is being mixed with the bizarre. A quality that’s especially pronounced given how seriously previous F1-licensed games have taken themselves. 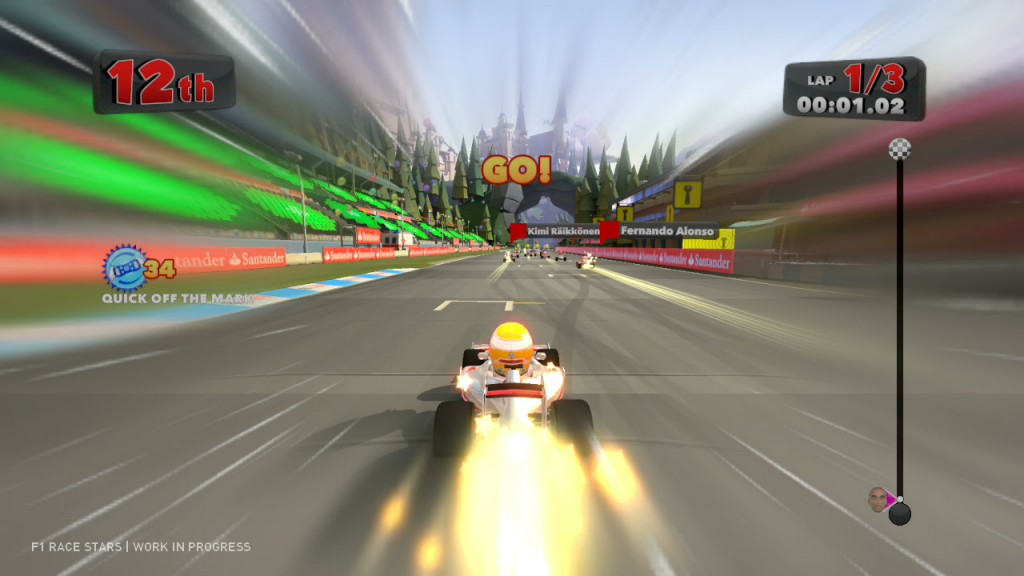 The version of Hockenheim we’re shown (the only track we’ve seen so far), packs shortcuts, the aforementioned jumps and castles and even a highway section that forces you to navigate through ongoing traffic. Hitting the civilian vehicles, and/or taking too many attacks, causes damage to your kart which must be repaired by driving through a WipEout style pit stop in the form of a short side road that branches off the start/finish straight.

At roughly three minutes per lap, the track is longer than most seen in these kinds of games and one of the ways the team is trying to retain a bit of the F1 flavour. The length also allows for some impressive diversity in terrain type, including forest, fields, urban settlements and a river/lake-side sweep.

The game can be played in four-player split-screen, or with up to 12 players online. In a nice Halo-esque touch, four players can play in split screen and then join up with other players online in a bid to drop the AI racers and play exclusively with real players. While we didn’t see split-screen in action, the graphical style is cartoony enough that it should be fine to see what you’re doing easily on any TV bigger than 30/32 inches.

It’s a positive sign that I was impressed by F1 Race Stars given how fragile I felt during the demo. If I’d seen it the night before, pissed and overcome by the feeling of floating two feet above the ground at all times, I’d probably tell you that it was the best game of all time. It’s that sort of game, one to play and enjoy and laugh at, rather than to take deadly seriously and analyse to the nth degree.

Oh, and it’s got loop-the-loops. Maybe falling from one of those will wipe that annoying smirk fromHamilton’s face.