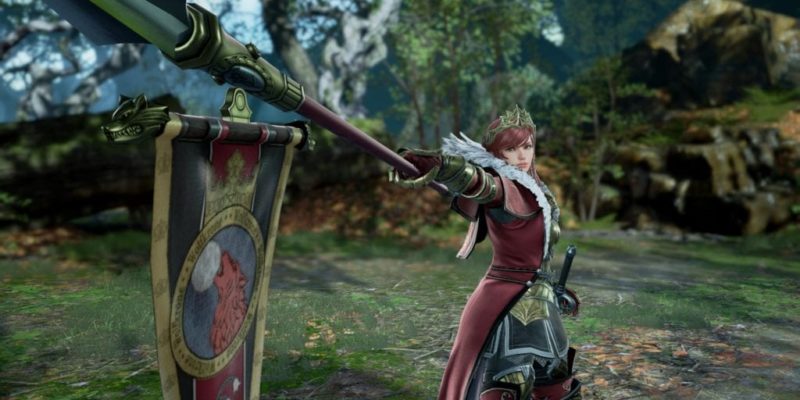 Hildegard von Krone, the princess knight, is returning to the Soulcalibur series with Soulcalibur VI’s Season Pass 2 DLC. Hilde, as she’s more affectionately known, is sporting an updated look, but she still wields her iconic short sword and spear combo.

Hilde was revealed in a trailer shown after the culmination of the Soulcalibur VI World Invitational 2019.  She has been an ever-present face on the Soulcalibur roster since Soulcalibur IV, where she was banned from competitive play for being too powerful. She could knock opponents out of the ring with a single combo.

Fighting for honor and duty, Hilde has spent a large portion of her life defending her people from the predatory intentions of neighboring countries. Her strong sense of duty and her love for her people are her motivation to take on all challengers. As the princess of a small independent nation, she was expected to possess both strength and wisdom, which would have made ideal names for her two signature weapons.

A knight and a samurai walk into Soulcalibur VI

There appear to be four new characters being introduced with the Season Pass 2. We already know that Haohmaru, the main character from Samurai Shodown, will be one of the new characters alongside Hilde. The other two remain unknown.

The Soulcalibur VI Season Pass 2 will also introduce new moves for all the game’s existing characters. You can see some of them in action in the trailer below.

We don’t know when Soulcalibur VI Season 2 will kick off, but it’s unlikely to be before EVO Japan 2020, which takes place in January. That is most likely when the release date will be announced.

Soulcalibur VI is available on PC via Steam.