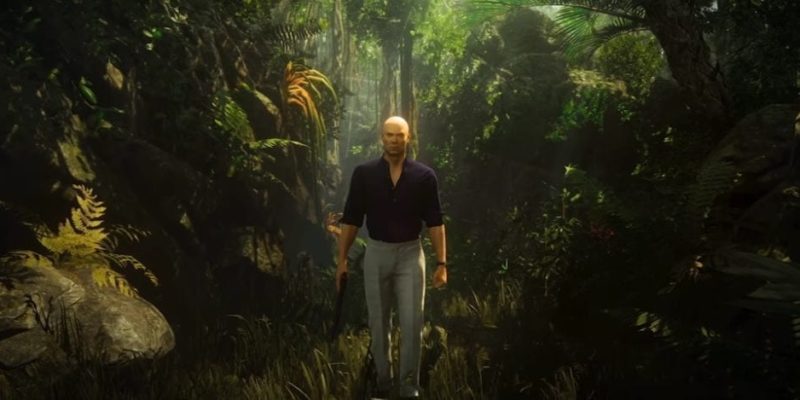 Agent 47 is back, and this time around he’s trekking deep in Colombia’s villages and jungles. That’s what the latest trailer for Hitman 2 shows off, featuring the town of Santa Fortuna. Check it out below:

For starters, we’ve got some good, old-fashioned fisticuffs and a thrown hammer hitting someone in the face. Next up, we see a slight glimpse of the town itself situated near the river. Not everything is quaint, however, because Agent 47’s on a mission to eliminate the three cartel leaders that are meeting in the location. Dismantling their organizations by taking out the top brass is your main goal, after all.

We’re also treated to some neat kills, such as a knife to the back and Agent 47 casually rigging a gas tank. The resulting explosion has our favorite assassin walking off in slow-mo, akin to a John Woo flick. After that, we’ve got an exploding pipe vent, a block of cocaine knocking someone out, and a falling art deco crushing someone into a pulp. Yes, we even saw Chekhov’s hippo — which means some baddie out there will probably get trampled or drowned by one.

If trekking in the jungles and caves of Colombia isn’t your jam, you can always try out Hitman 2’s Sniper Assassin Mode. This one’s available for those who’ve pre-ordered the game.

As you can see in the trailer above, Hitman 2’s Sniper Assassin game mode features co-op play for the franchise. You and a buddy can team up to take out vital targets and their bodyguards. Naturally, this makes for some creative tandem kills and coop fun.

Given the critical success of Hitman in 2016, we’re looking forward to what IO Interactive can bring to the table knowing that the sequel will not be episodic in nature. It bears noting that the game was considered as a breath of fresh air in a near two-decade-old franchise.

We also need to remember that the studio parted ways with Square Enix after a management buyout. That event saw the studio become independent whilst retaining rights to the Hitman and Freedom Fighters series.

Hitman 2, which releases on November 13 and is published jointly with Warner Bros. Interactive, will show just how firmly the studio can stand on its own feet without Square Enix/Eidos’ guidance.

By Mike Straw34 mins ago
Hardware