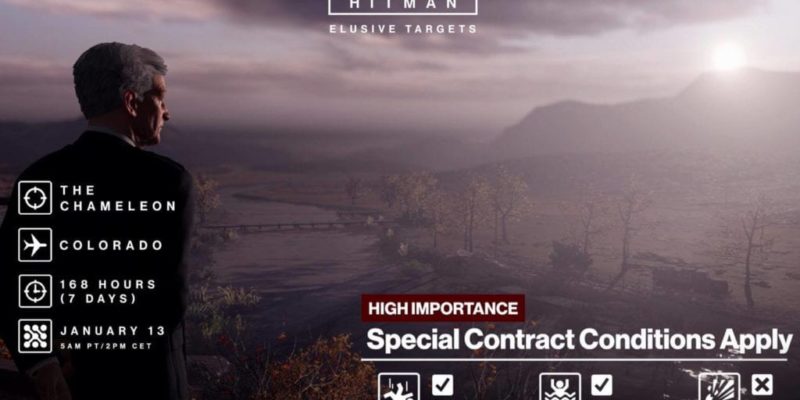 The next Elusive Target due for a trip to Hitman-land is Richard Foreman, AKA The Chameleon, who’ll head to the Colorado map on 13 January. He’ll be there for seven days, and has some special conditions attached to his potential assassination.

For a start, as well as killing Foreman, Agent 47 will need to retrieve some documents. Since the briefing video isn’t available yet, it’s not clear if Foreman will be carrying these or if they’ll be somewhere else in the area. Secondly, in what looks like IO making a direct challenge to all the people who’d been using fire extinguishers to kill Elusive Targets, Foreman can’t be eliminated by an explosion.

Completing this Elusive contract will unlock the Colorado map’s ‘Tactical Gear with Hunter’s Hat’. If you manage to do it as a Silent Assassin, it’ll count as one of five on the way towards unlocking Winter Suit. Silent Assassin hits have been counting towards the Winter Suit since 18 November, so you could theoretically unlock it with one here.

IO have released a handy Hitman chart showing the various suit unlocks that are possible at the moment. See that, below (click for larger version). 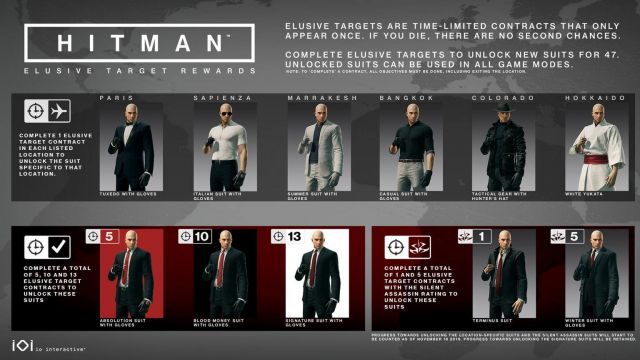