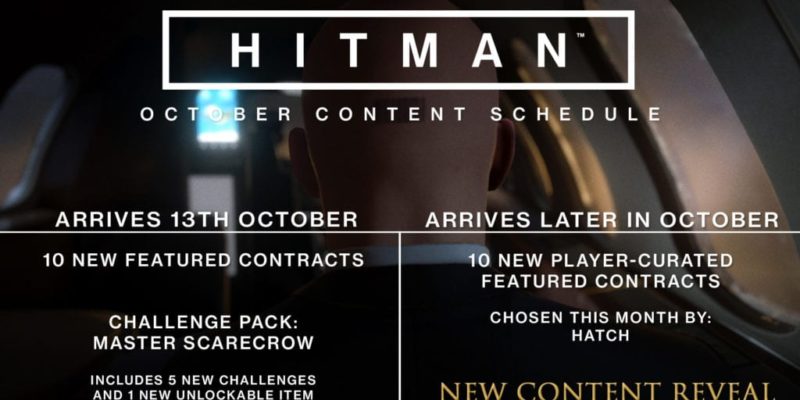 IO Interactive have (mostly) spelled out a Hitman schedule for October, which will bring more highlighted contracts and free challenges to the game. They’re also teasing something slightly more special on 24 October, while at the same time keeping somewhat vague about it.

To avoid over-hype, they have categorically stated that this is not a “Season Two” announcement. 2pm CEST is when the reveal of whatever this is will be happening, so I guess it’s just a case of waiting for that day and time. It’s near Halloween of course, so this is possibly something seasonal (they did Christmas last year, after all). That’s just speculation from me though.

In terms of what is unquestionably coming to Hitman, 13 October will see the highlighting of ten featured contracts. These are the player-made contracts that IO has taken an interest in for differing reasons. Alongside those, Colorado will be receiving a Master Scarecrow Challenge Pack. It’ll have five new (presumably Scarecrow-themed) challenges, each with plenty of location mastery. Completing all five of these will unlock an unnamed item for Agent 47 to use in all map locations.

As well as the mystery reveal, 24 October will bring another ten highlighted contracts. This time curated by a British speedrunner of the game.

Win a copy of the Stronghold 2: Steam Edition

The Evil Within 2 PC specs and settings revealed, preload up now