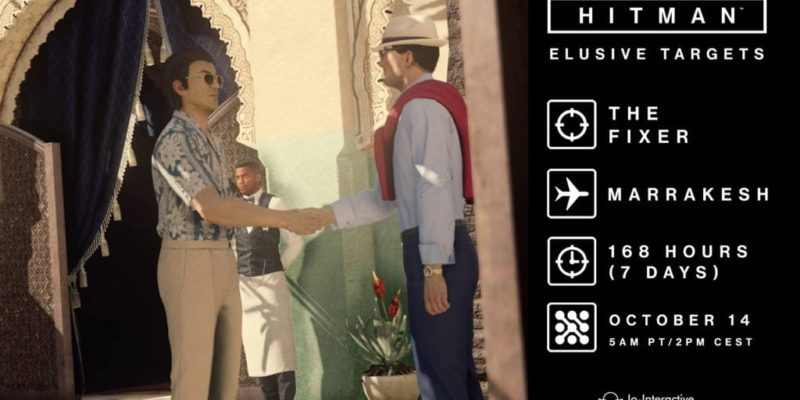 The next (and eleventh) Hitman Elusive Target will be taking Agent 47 back to the markets of Marrakesh, to deal with a chap codenamed The Fixer. He’s shaking hands in a very sinister fashion in the preview image, so obviously he has to die.

Most likely he’s setting up dodgy arms deals or something, so, you know, it’s all justified. Further details about the target will no doubt emerge closer to the date of his appearance in Marrakesh, which is 14 October (5am Pacific time). As seems to be the new style for these Hitman Elusive Targets, he’ll stick around for a full seven days. Plenty of time to sort him out.

The usual rules apply; you get one ‘life’, so if you die trying to get the target them you won’t get to try again. You can however just restart the mission if things are starting to get a bit hot (at least up to the point where you’re trying to make your escape, anyway). So that helps.

If you’re keeping track of your Elusive Target successes, then you’ll know that if you reach five you’ll unlock the Absolution suit. Ten will net you the Blood Money suit.