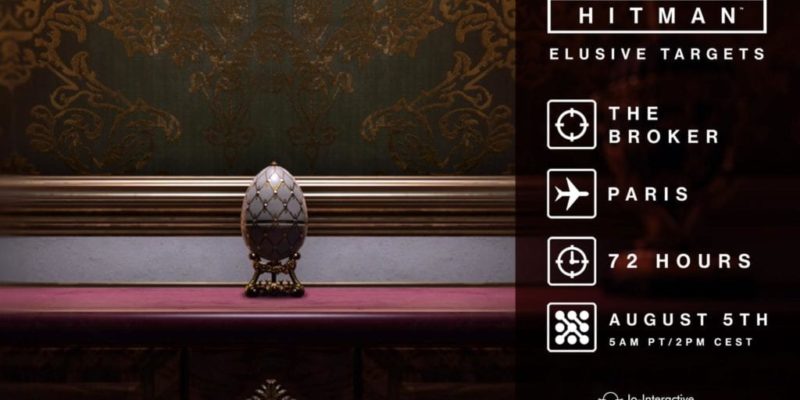 Now that Gary Busey has come and gone on his (potentially fatal) visit to Sapienza, there’s room in Hitman for a brand new elusive target. One will be appearing in Paris on 5 August, and goes by the codename ‘The Broker’.

By the looks of it, that name stems from his intent to flog a Faberge Egg called ‘The Ivory White’ to somebody in the building. In this elusive contract, Agent 47 must kill the Broker and snatch up the Ivory White to succeed. As with prior targets (except Busey, who stuck around a whole week), there’ll be a 72 hour window.

Speaking of Busey, the Hitman blog post notes that his elusive contract was played by “47% more players” than the (unnamed) second most played elusive target. Yes, 47. As IO themselves note, however, Busey’s contract was up quite a bit longer than the others. Most people took him down with a ballistic kill, a few opted for the explosive golf ball, and just 3% managed a Silent Assassin run.

More details about Episode 4 (Thailand) are promised in early August, including a release date (currently expected to be late August) and specifics about the location.