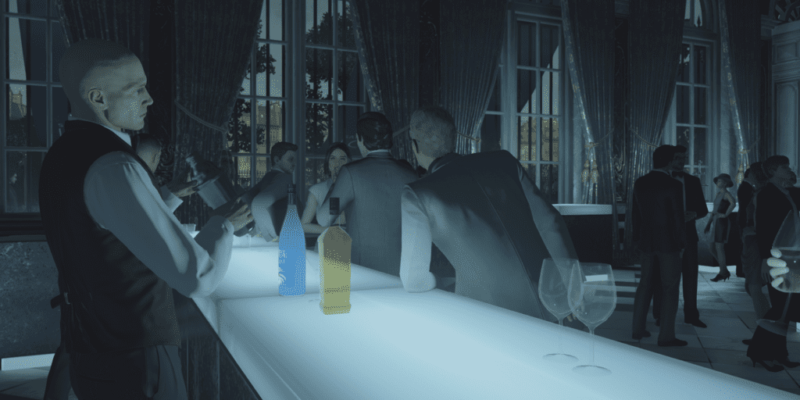 I’m pretty impressed by a lot of IO Interactive’s latest Hitman venture. It takes enough inspiration from Blood Money’s assassination sandboxes (for many, the series high point), without just being a retread of that game. There are, for example, several regularly updated, online-based aspects; Contracts mode (returning in a somewhat simplified form from Absolution), and new ideas like Escalation and Elusive Targets. Escalation just got a couple more missions added today.

Unfortunately, Hitman takes its online implementation to some unnecessary extremes, and the decision to do so has significantly damaged the title’s reception.

I like the majority of IO’s special modes in concept, and can just about understand why something like Elusive Target (a one-off, one-shot kill, with players ranked on leaderboards accordingly) would require an online component to prevent cheating shenanigans. But matters are a lot less acceptable when it comes to how online play is handled during the Paris episode’s main Showstopper mission. 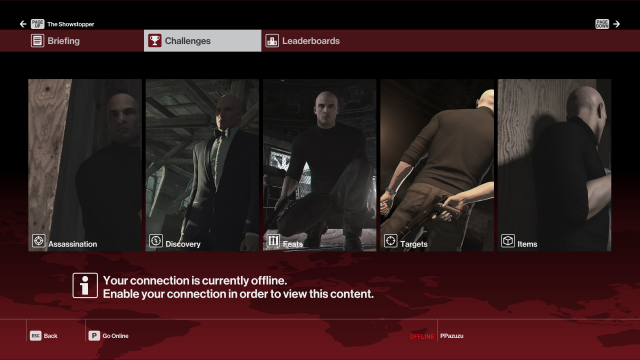 Challenges are too challenging for offline play, apparently.

If both you and, more importantly, IO’s distant server farm maintain a connection, everything works as planned. You play through the mission, Agent 47 kills some naughty folks, everyone’s happy. If, at any point, the connection drops (or fails to call home, or you just want to use Steam’s offline mode, or whatever), you are immediately dumped out of the level and sent back to the main menu screens.

This can happen during Escalation or Contracts runs too, which is especially irritating because (by design) you can’t save your progress there. At least with the Showstopper mission it’s possible to wait for the servers to reappear again and load up an auto-save (which are fairly frequent).

Getting dumped out of the mission when the servers are feeling unstable (as they have been since last week’s launch) is rather annoying, but this isn’t actually the worst thing about Hitman’s online implementation. The aspect which really promoted this piece is how the game deals with offline play. 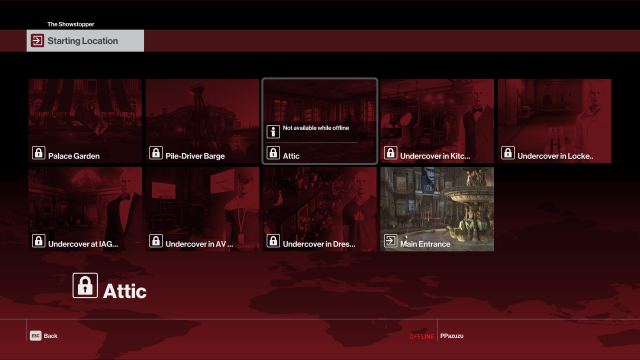 Sorry, you need an internet connection to choose a different starting location because reasons.

In short, it’s extremely limited. You can play through the Paris mission, but it won’t track any challenge progress or allow you to use any of the bits and pieces unlocked through online play. Any offline runs are treated as completely separate saves, and restrict access to most of the elements that make Hitman’s now-episodic levels worth replaying. Completing challenges and opening up things like new starting positions (disguised as a waiter in the kitchens, or whatever), is impossible when offline.

This pretty much guts and important part of the game, and prevents people from having nearly as much reason to replay and retry the Showstopper mission. Without the extra equipment gained through the online-only ‘Mastery’ progress system, it’s not even possible to kill the targets in certain ways. You won’t be doing any sniping for example, because the sniper rifle only shows up as an equipment choice once you’ve finished a few challenges.

This is a dreadful implementation of an offline mode, and almost seems to exist in this reduced form so that “yes, you can (technically) play offline” can be included in a feature checklist. I see no sensible reason why, at the very least, ‘Mastery’ cannot be tracked in the separate offline save-state and stored locally on a player’s PC. This wouldn’t magically fix Hitman’s online problems, but it would at least allow people to play a more substantial portion of the game/episode they’ve actually bought.

The Hitman Q&A from the game’s official site doesn’t even mention the extent to which offline mode is restricted. It does emphasise that a connection is necessary to get the most out of the title, but keeps the inability to progress through challenges quiet:

Can I play HITMAN offline or do you have to be connected all the time?

You will be able to play the locations and missions offline. To play the live events, download updates or see things like leaderboards, you’ll need to be online.)

That Q&A is from July 2015, so there is a possibility that the functionally of offline mode diminished further after this was published. However, if that were the case it should have been updated.
I’ve no idea whether IO Interactive have the desire to make substantial changes to how Hitman handles offline play, but with episodic development ongoing until at least 2017 it must be a possibility. The game itself is (in the opening installment at least) feeling like a resurgence for the series, so it’s a disappointment to see it being harmed by an over-reliance on always-online play.

McLaren Uses the Unreal Engine for Designing its High-End Cars