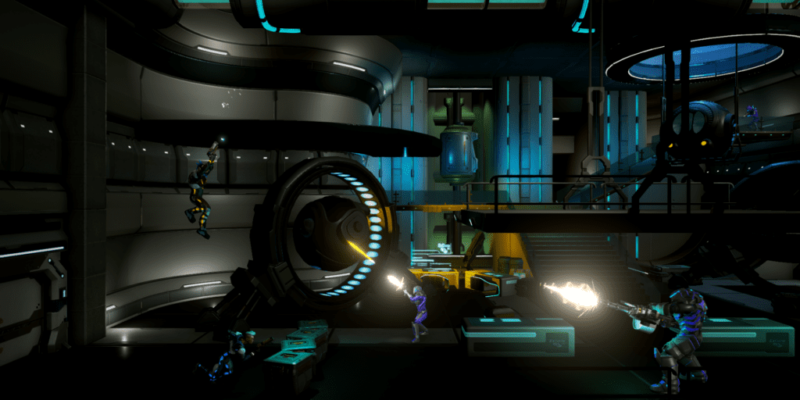 In 2014 Paradox announced a game called Hollowpoint which was a game being developed by Ruffian of Crackdown fame. We’ve not heard much about this 2.5D shooter since then but it has resurfaced.

Paradox is no longer in charge of Hollowpoint as an announcement from UK-based developer Red Kite reveals that they are now in control of the IP and all development of the game.

Hollowpoint is a 2.5D co-op focused action title which was first shown at Sony’s Gamescom conference in 2014. In this game, a band of mercenaries is taking on the global mega-corporations and they have to fight their way through base after base with the use of stealth and force.

The game appears to the be the same game as it was back in 2014 and it still looks pretty great with a 2.5D view that adapts to the surroundings.

“We’re really excited about Hollowpoint’s universe, and it’s one we can see shifting and changing as players embed themselves in the battle between the Mega-Corps,” says David Roberts, Creative Director at Red Kite Games. “There’s so much potential to do something really engaging with the IP. Hollowpoint’s dystopian view of the future may not be all too pleasant for those living it, but for players, we’re confident that the range of missions along with an ever-changing world will keep people captivated for some time to come.”

We’re not exactly sure what happened between Ruffian and Paradox with Hollowpoint but in March 2016 Ruffian parted ways with Paradox and the game was put on hold. Paradox must have sold off the IP to Red Kite and development has now resumed which will hopefully be good news for gamers.

Hollowpoint is “coming soon” and there’s a new trailer to enjoy.