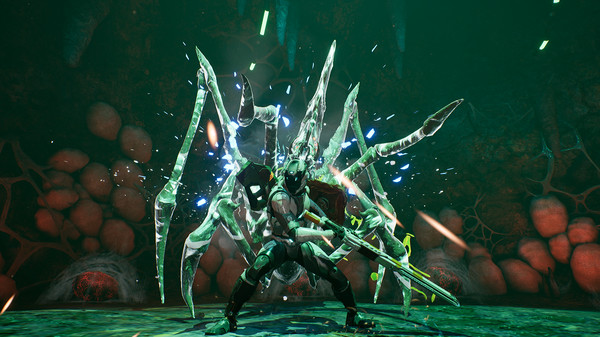 gamescom 2021 brought plenty of announcements for people who love scares, like the upcoming The Outlast Trials and Madison. But one of the more intriguing options seen at the gaming event was the horror action RPG Dolmen, which takes place entirely in space. Developer Massive Work Studio released a new gameplay trailer for Dolmen, as well as a story trailer, so there’s plenty to dive into.

In Dolmen, you’re cast into an alien world known as Revion Prime. You have one job: to bring back crystals known as “Dolmen,” which are able to facilitate interaction between realities and further space exploration. However, the places where Dolmen lay also contain horrifying sci-fi creatures that you must defeat in order to advance. The game mixes futuristic sci-fi with horror elements, so you know these creatures will frighten you.

The game features a rich combat system where you grow stronger after each battle. You have a choice between melee or ranged combat, allowing you to switch up the way you fight enemies. There are various weapons and moves, as well as an elemental system where you can take advantage of enemy weaknesses. You also have to gather energy, which allows you to use ranged weapons or enter ‘energy mode.’ It’s here in ‘energy mode’ where you can infuse your weapons with elemental energy.

The featured gameplay trailer seems to dive into this system, with the playable character infusing themselves with elements that look like ice and fire. The enemies in the featured trailer also look intimidating in their own right, with tentacles and tendrils everywhere.

You can check out the gameplay trailer for Dolmen below. Additionally, you can watch a story trailer here to get a brief glimpse into the game’s lore. Dolmen currently has a tentative release date of 2022, and you can wishlist the game on Steam today.