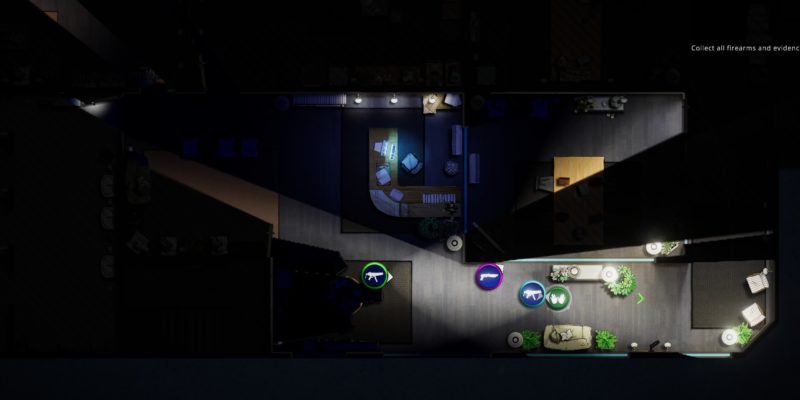 You know what the Hot Brass preview reminded me of? SWAT! From its unlikely origins as the FMV game Police Quest: SWAT to the crime-fighting multiplayer mayhem of SWAT 4, it was the hardcore police action game. Can Hot Brass capture some of the charm?

SWAT is the American version of police tactical units that exist around the world. They’re uniformed officers with the special training that may be called into a high-stakes situation. Most of the time, they act like the regular officers, but when the time comes, they don their armor, grab their guns and — 80% of time — serve… warrants? Regardless, in Hot Brass, your tasks are more serious, starting with a weird home invasion and escalating further.

Unlike dear old SWAT 3 and SWAT 4, Hot Brass is a 2D game from the top-down perspective. You’ll be shooting suspects, picking locks, throwing flashbangs, and sliding over obstacles, all in glorious two dimensions. To this end, you’ll enjoy a fairly conventional mouse and WASD setup. 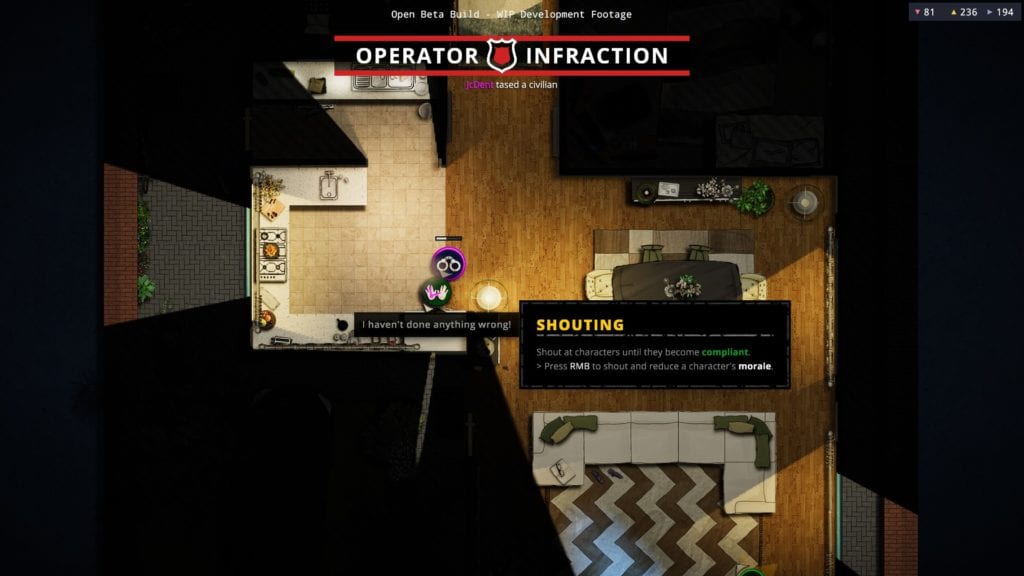 The right mouse button is reserved for “screaming at perps until they give up.”

The weirdest thing you’ll notice in Hot Brass is the way it chooses to represent people on the screen. You’d expect the usual, seeing the top of the head, shoulders, maybe arms and legs when applicable. Not in this game! Cops, robbers, hostages – everyone appears as circles. The center of the circle displays the currently equipped item. The four SWAT officers are color-coded. Everyone else displays a color depending on their current attitude.

This is a big deal in the game, as Hot Brass expects you to follow police procedure. Your goal is to finish the mission without causing any infractions (which autofail your mission, but still allow you to play it out till the end).

This means that you should not shoot the perp if he’s not aggressive. You’ll know those from the red color of their circle and the fire coming your way. However, most perps wander around the maps as brown chits. Upon encountering one, you’ll have to scream him down and make him give up. If you see weapons flying out of the circle and it turns green, you’re in luck. If not, you’re probably getting bullets. The color changes are usually accompanied by an appropriate pithy phrase.

“Lead” is not a type of less-than-lethal ammunition

There’s always that tense moment when you’re screaming at an SMG-totting chit and hoping they’ll see reason. And hell, sometimes they don’t. Stubborn perps can change their mind after they get a taste of the taser, (The preview only had the melee version.) a few bullets whizz past their ears, or when they sustain a few non-lethal gunshot wounds. 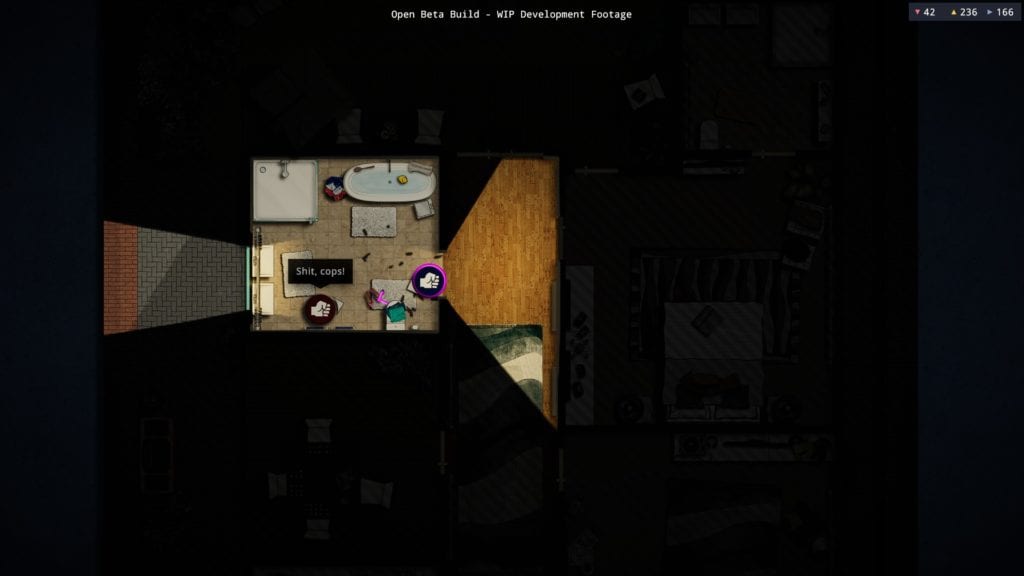 You an also opt for tactical fists.

Granted, Hot Brass is not True Crime: Streets of LA; you don’t really have limbs you can target. So you shouldn’t get too optimistic with bullets as your tool for negotiations and reconciliation. Oh, and once a perp gives up, you should cuff them as soon as you can. Sometimes, they decide to get their gun back.

Aside from hot lead, Hot Brass allows you to take a few tools on the mission. One of them is the miraculous under-door camera that entranced all of us playing SWAT 3. This one comes with night vision mode as well. The rest of the toolkit comes in the shape of grenades and explosives, though you can expect stuff like ammo supplies as well.

You will also be able to choose your armor class, your main weapon, and a side arm. Just like your tools, they will be unlocked as you progress through the game and complete mission-specific achievements.

Walls are merely a social construct

Now, back to the tools. Remember blowing up doors in SWAT? Well, in Hot Brass, that same charge can be used to blow up walls and criminals alike. In fact, there’s at least a single room in the preview mission that’s set up just so you can experience your mouse-holing fantasies. And that’s besides your usual abilities to break windows and kick down doors. This is some serious breach-bang-and-clear stuff. 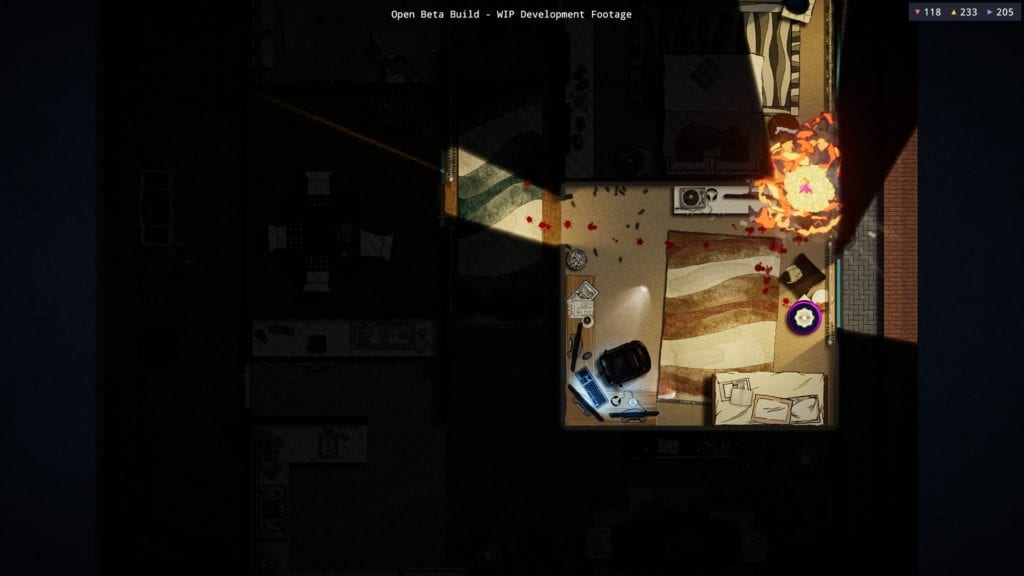 Surprise the perp by choosing a route no sane man would take.

And while it’s technically possible to play Hot Brass solo, it’s much easier and a lot more hilarious to do it with friends. There’s a lot of levity to be found in four SWAT officers milling around, kicking down doors, and constantly screaming, “THIS IS THE POLICE.” Then you run into a perp, someone drops a flashbang too close to you, all hell breaks lose, and you come to with two bullets in your back.

People will be shooting at you

But there are downsides to Hot Brass. Collision detection means that it’s easy to get in each other’s way, and sometimes you’ll get stuck behind scenery. Sure, your officers can slide over anything (including the SWAT van), but it is a bit annoying. It also doesn’t help that one of the officers has a green outline — the same as perps that are giving up. It made one of my companions really nervous when we played. 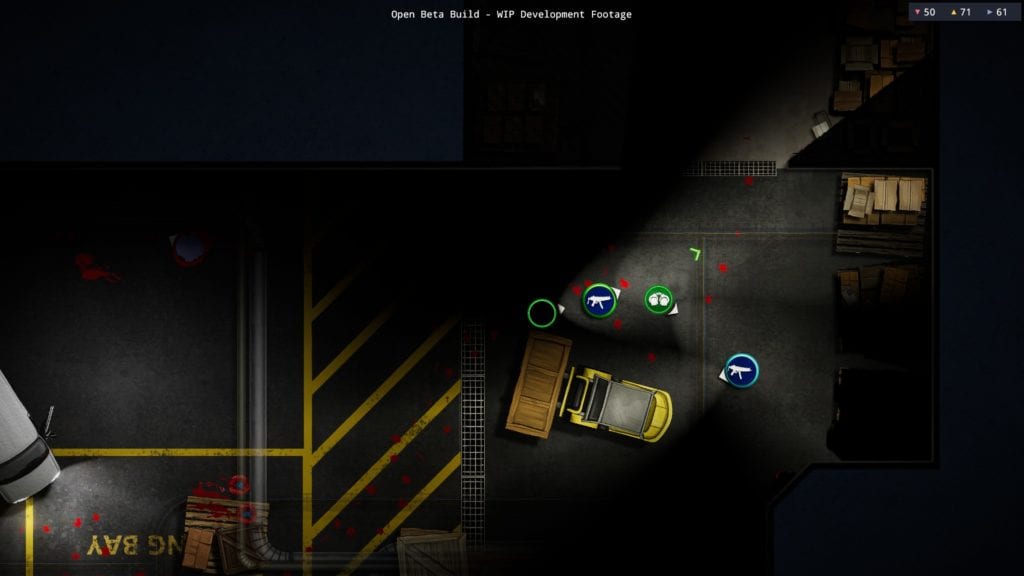 Notably, you can’t take away an arrested perp’s flashlight.

Failing a mission for infractions at least sets the tone of the game. It’s a bit sad that the realistic aspect of Hot Brass demands that you aren’t able to revive downed teammates. If you’re not on the last stretch of the mission, this usually means restarting, as you are liable to run into wildly unbalanced amount of perps.

Being able to save the mission between the floors would help. Hot Brass already throws you a bone in that, whenever you clear a floor, it tells you that it’s clear. So why not also save your progress as you go up/down the stairs? You can’t be spotted or fired at from the floors higher or lower than you are.

Hot Brass breaks from realism with health stations, adding to questions over how to manage the difficulty. You see, if your cop gets seriously wounded, they may no longer run, and they move a lot slower. However, at the whim of the level designer, a health station may appear on the floor. It’s a flying, rotating medicine box that allows each officer in the team a single heal each. No part of this is even remotely realistic, yet the devs acknowledge the importance of health stations for longer missions via loading screen text. 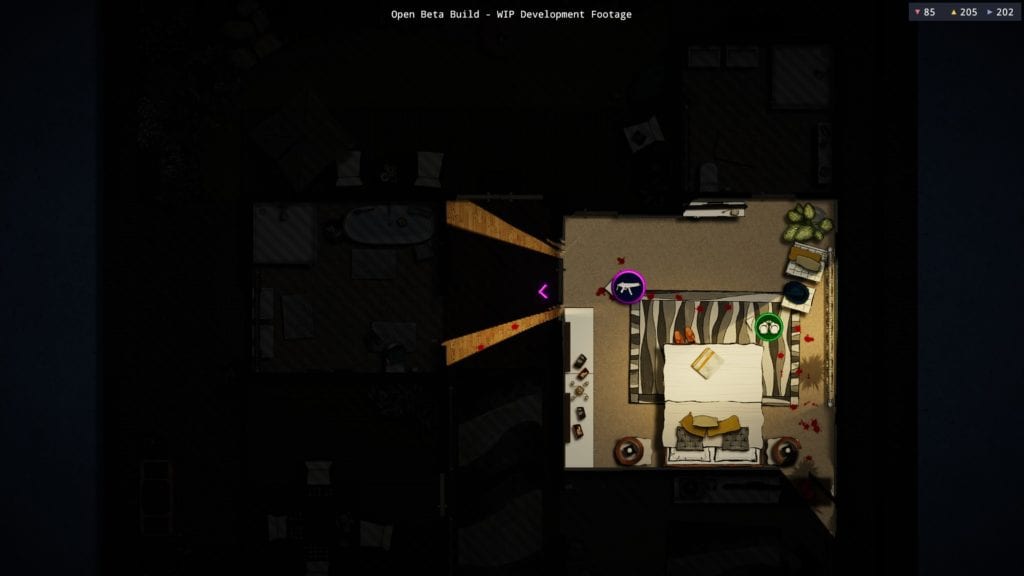 Fun fact: You can BRRRT away the walls around a door, but the doors themselves are immune to bullets.

We also had some trouble connecting for a multiplayer game, but that’s something that can be patched out rather than a question of game design.

Overall, I enjoy the visual aspect of Hot Brass. As the post-game questionnaire reveals, the devs are very conscious of their decision to go with cop circles instead of more usual character models. And I like the circles! I love the bright neon outline they get when your cop crouches. I like the action, the explosions, the special effects; it all looks nice. The menu art could be better — and the maximum diversity SWAT team is charmingly ’90s — but the game is OK visually.

Now, the menu music is strangely upbeat, something you’d expect of a street basketball spin-off of NBA Live 97 rather than a SWAT game. But it works, so I can’t really knock it. Each officer in Hot Brass also gets their own spoken lines, whether it’s notifying others about perps spotted via the UDC or shouting at some dude to drop his shotgun. The gunfights sound great as well.

All in all, Hot Brass is shaping up to be a fun multiplayer cop experience. The devs, Walk with Kings, seem to be a new studio that’s at the same time shepherding its resources very consciously. If they could just work some cross-floor saving into this game, it would be lovely, especially considering that we’ll have much longer missions in the full version. It would be a terrible shame for all that shouting to go to waste due to a single stray bullet.

Get Deathslinging in Chains of Hate, Dead By Daylight’s latest DLC

By Logan Broadley8 hours ago
Previews