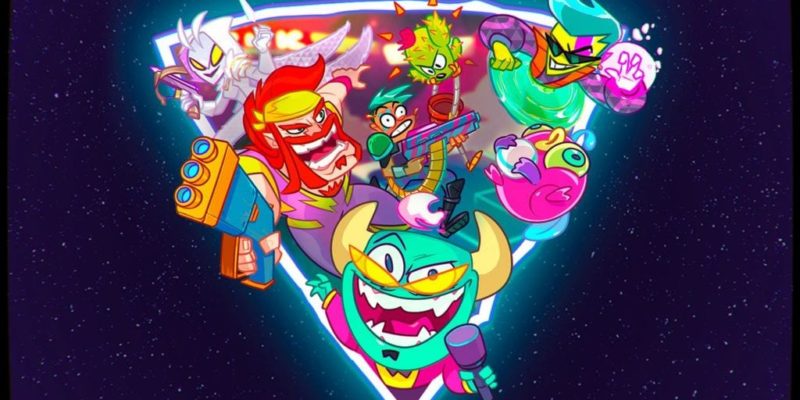 If I had to name two skills I possess, they’d be being an idiot in games and ruining friendships. Hot Shot Burn, billed as a comedic competitive game that’ll destroy friendships, is therefore perfect for me. I gathered together three fellow idiots, started up an online game, and spent a few hours getting to grips with this chaotic party game.

Hot Shot Burn pits up to four players against one another in a one-hit-kill carnival of bright, beautiful, cartoony murder. Pick your character, drop into an arena, shoot the other players, and don’t forget to grab nachos. Yes, nachos. We’ll get to that. 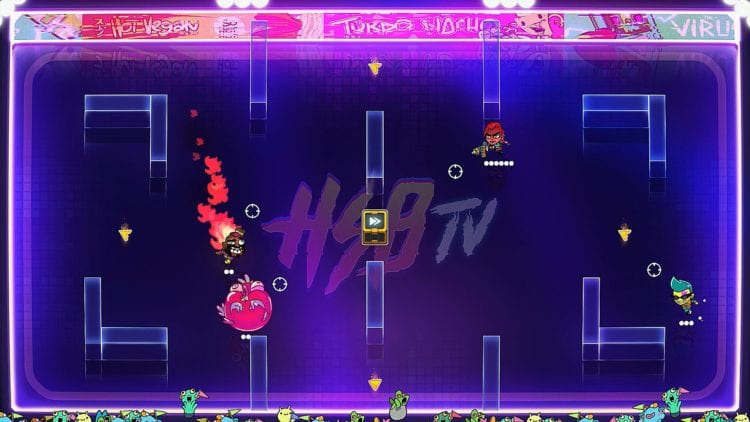 I’m not sure what “Hot Vegan” or “Turbo Nachos” are, but I could go for either right now.

At first glance, Hot Shot Burn appears to be a top-down twin-stick shooter. However, it’s probably more accurate to call it a single-stick shooter. (And a controller is very much recommended at this point.) You can’t move and aim in separate directions: wherever you’re moving is where you’re aiming. It’s a quirky design choice, but one I pretty quickly started to appreciate.

This isn’t a game of hiding behind walls and ducking out to shoot at the other players, or running away while firing behind you. Aiming at someone else means you’ve been moving towards them. That means you’ve exposed yourself to danger, too. It gets weirdly calculating for such a manic kill-fest.

Really, those are the basics. You choose your character and try to shoot other people without getting shot. But the more I played, the more I appreciated the little bits of depth you can find in here. 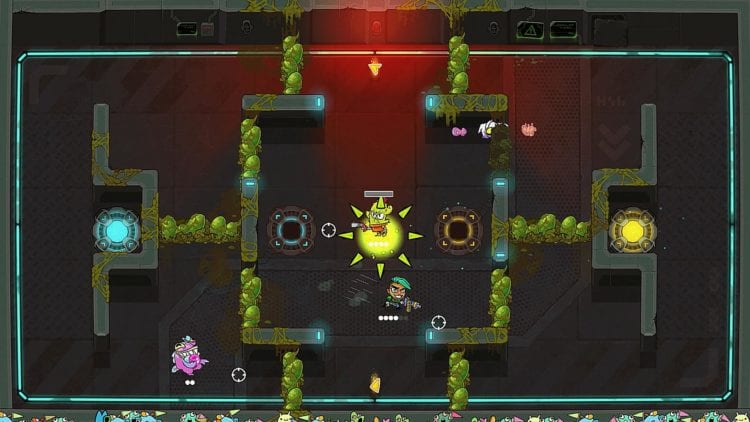 Mr. Peakl, the ambulatory cactus, can blast out some slow-moving spikes around him. Sounds powerful? Don’t worry: everyone else has abilities to compensate.

For one thing, there are a variety of playable characters. Other than the boring stuff like “ammo count” and “movement speed”, all of them have their own weapons and abilities.

As an example, the aptly named Umad can puff himself up into a big blob that deflects gunfire. Time it right, and any would-be assassin is going to shoot themselves in the face. Time it wrong, and you’re a sitting duck, with the other players just waiting for the ability to run out so they can blast you.

Luna can charge up her shots to fire through walls but has a meager clip capacity. Wizardo can launch out a disk and teleport to it at the tap of a button, letting him instantly warp away from danger or teleport behind an aggressor to shoot them in the back. Others have devastating charges, bullets that bounce off walls, and other quirks that completely change the way you need to approach each round of Hot Shot Burn.

If you’re worried that a skilled player can dominate… well, you’re not wrong. That said, when one of our crew started getting particularly good, we’d gun for him first. The impression I got was something like Rocket League: low-level play is hilarious brute idiocy, but as you get better you can pull off some truly impressive feats.

Hot Shot Burn is first and foremost a party game, though. This means there’s some hefty rubber-banding in place. Each game is set up as a tournament, with every player trying to hit 50 points. Picking up a nacho is one point. A kill is worth three, while surviving the round is worth five. Yet more points are awarded for skillful kills, kills from beyond the grave, or taking out the top player; all of this means that the player in last can be catapulted into first after a single good round. It doesn’t hurt that lower-scoring players receive some advantages, like a shield that’ll block a single incoming shot.

It’s not actually over when a player hits that 50 point mark, either. To truly win, you need to reach 50 points and then survive at least one more round. Considering that at least one other player is likely to have a shield and that all of the other players will start gunning for you to prevent you from winning, that’s no easy task. In our play session, we were making and breaking alliances almost instantly. “Everyone go for the guy with 50 points!” was usually followed up with some poor, trusting fool being shot in the back. 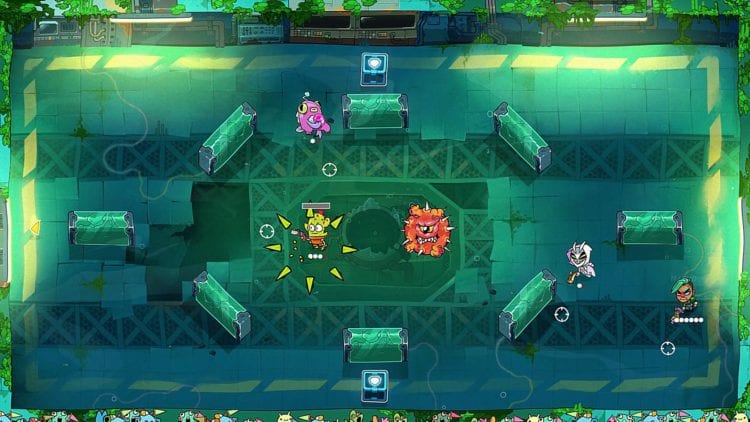 Other than being underwater and thus having something akin to sluggish ice physics, this level has the Cacodemon-looking chap in the center. He’s perfectly chill until you shoot him, at which point he grows spikes and ricochets around at high speeds.

If there is an issue, it’s that at first things seem… a little simple? While almost certainly intentional, you start the game with a pool of pretty standard levels and the simpler character unlocked. The most complex piece of level design you need to worry about early on are walls that ricochet bullets instead of stopping them dead.

Every couple of full games, though, you’ll level up, which unlocks new maps, characters, or mutators. It’s those new maps that really mix things up. If the initial settings are neon arenas with a few walls breaking them up, it’s not long before you get underwater arenas with ice physics (and giant electrical deathtraps), wastelands with bushes that render players invisible save for a faintly visible rustling as they move, labs with angry monsters that can be knocked into other players, and more.

Mutators mix things up further, with hilarious results. Of the two I’ve unlocked so far, one spawns giant nachos on the map (worth five points apiece, so more than an actual kill), while another will suddenly swap the places of players. This inevitably leads to “Wait what NO, WHERE AM I” and can sometimes save your life. Or, sometimes, it gets you instantly obliterated. And it’s brilliant.

So no. This isn’t a game about strict competitive play, where skill tops all. It’s about stupidity, ridiculous kills, massive rubber-banding, and having fun with friends — and that’s just fine by me. 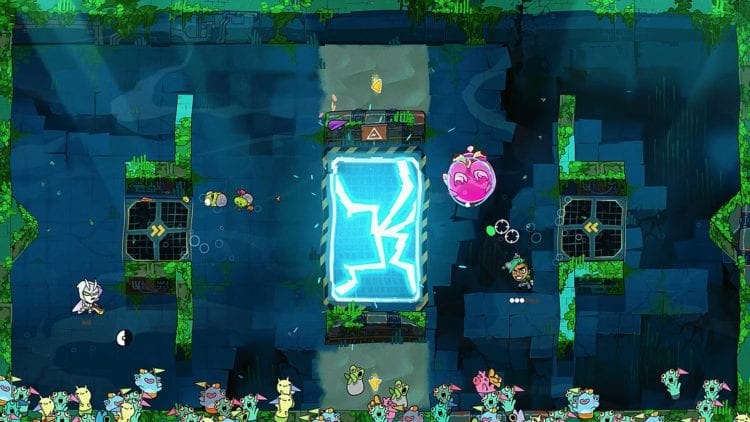 I hate this map with every fiber of my being. The electric death pit in the middle killed me almost every single time I played it.

Other than more maps, mutators, and characters (all of which are doubtless in the pipeline, and it looks like I’ve got one mutator and four maps left to unlock), I’d like to see some more granularity with server settings. I want to set up house rules, basically.

I want to set up map playlists. To set the timers on maps before the walls start closing in (even if most matches are over within 15 seconds). I want to decide whether certain mutators are on or off, and change the frequency with which they occur. And I absolutely want to change the timing for the electric death zone on the one underwater map because it killed me so often.

For quick online play or for parties where people are swapping in and out, this isn’t so important. But when it’s you and three friends, it’d be nice to have more control over how often we’ll see maps and mutators and maybe manually adjust some of the features on them. 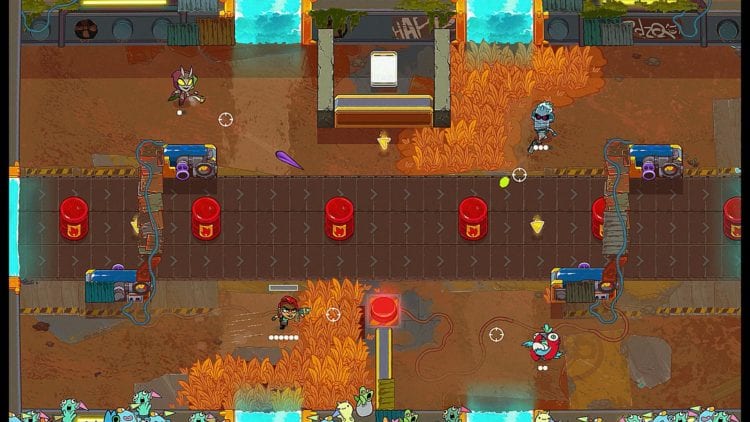 Conveyor belts, bushes that render you invisible, explosive barrels, and flamethrowers that you can activate with a switch? This’ll end well.

While it’s not as immediately hilarious as Duck Game, Hot Shot Burn can happily sit alongside it. The exploding feathers simulator is better for 30-minute bursts of laughter, but this new title is – ironically – a bit of a slower burn. Not quite as many laughs (though plenty to be had), but not something I got tired of quite so quickly.

In its current state, it’s a brilliant game for an hour or two of idiocy with friends, or as a pass-the-controller game at an event or party. As updates roll in and it Hot Shot Burns its way out of Early Access, I can only imagine it’ll improve on that. I’d had quite enough two days ago, but now I’m ready to go back into the most brutal gameshow since Smash TV.

If you want to check out our play session and our initial confusion, gradually growing appreciation, and eventual “okay maybe just one more round,” you can do so here, as one of our marvelous idiots streamed the whole thing.

By Ben Kerry16 hours ago
Opinion