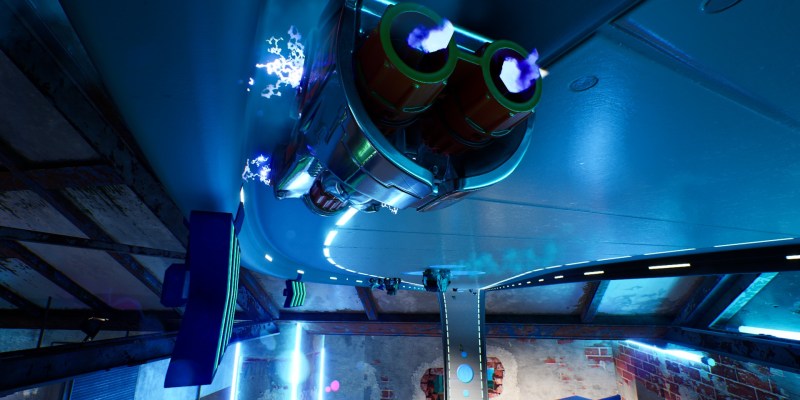 I’m sure most young boys in the western world have owned at least one Hot Wheels car, and very rarely is it ever just one. My younger brother and I were totally obsessed with the toyline for quite a few years. I have fond memories of just sitting in my room, racing the cars around, under, over, and on my bedroom furniture. Though I never went as far as having the iconic orange tracks, making my own was plenty of good fun. But, now I see just why those rollercoaster-like track builds were so fun. Playing through Hot Wheels Unleashed for the past few days has been just as fun, if not more so, than the real toys back in the day.

Hot Wheels Unleashed is the first licensed game for the franchise in quite some time. Though some Hot Wheels cars have made appearances in other racing titles such as the Forza Horizon series and Rocket League, playing a full-on dedicated Hot Wheels title immediately felt like it had its own merit.

In the case of the Hot Wheels vehicles in Forza, the car designs, though still true to the original visions, are upscaled life-sized versions. Thus, they control as such. In Hot Wheels Unleashed, however, they control like toys, because they are toys. And that makes for a pretty big difference.

Aside from the fact that these virtual “toys” still have audible motors and emit smoke from their exhaust pipes, they handle as nimbly as one would expect a toy to do. Drifts are really fun to pull off, though they require a bit of practice. But, with so many twists, curves, and bends, it’s an essential skill to learn in order to keep your speed up as you bomb through these wild track designs.

In true Hot Wheels nature, Unleashed features tracks that flow with their environment. That means that every nook and cranny of the surrounding area is used in wacky ways that only make sense because it’s Hot Wheels. When there aren’t loop-de-loops, boost pads, and insane jumps, there’s the gravity-magnetized sections of the tracks that allow the cars to keep their grip despite going completely vertical and upside down. The transitions between the regular track and the gravity sections are extremely slick and seamless, and are only really noticeable due to the cool-looking blue electric sparks that are emitted from a car’s tires when it’s rolling along these sections of the track.

Pulling ahead of the pack is all about maintaining speed and having good timing. There aren’t any gadgets to use against other racers. The tracks themselves are the hazards. 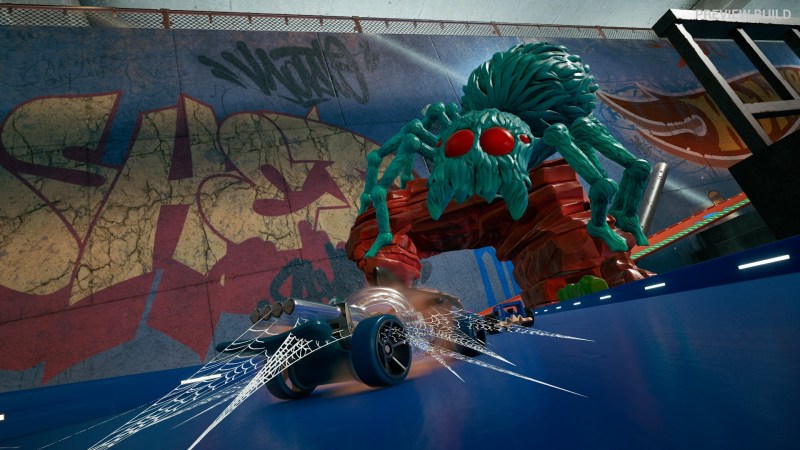 Some tracks have sections that go very high, yet purposefully lack guard rails. And plummeting off the edge often requires you to do the respawning as quick as you can (if there’s solid ground beneath you). Other portions of the track might have breakable gates that’ll slow you down on impact, or a tight landing area after a jump that’ll cause you to smack into a wall if you miss. I was quite annoyed with how many times I found myself performing a quick respawn, but in hindsight, it actually makes sense. These are meant to represent toy cars on toy tracks. Thinking back to the actual toys, smacking into objects, the track, or each other has always been part of the experience. Thus, Hot Wheels Unleashed provides an authentic virtual representation of that experience through and through.

What I think really brings the courses to life, and really the whole game, aren’t just the great designs, but also the high visual fidelity. Built using the new Unreal Engine 5, Hot Wheels Unleashed looks extremely detailed all around. The car models look nearly photorealistic, as every piece of material has very meticulous characteristics. For example, the slightly rough texture of the metallic portions of the cars is clearly visible, as are the common uneven portions of the plastic molds. I’m sure if you own any of the real models that are also featured in-game, it’ll be very hard to tell the difference. I just wish there were some customization options, however. 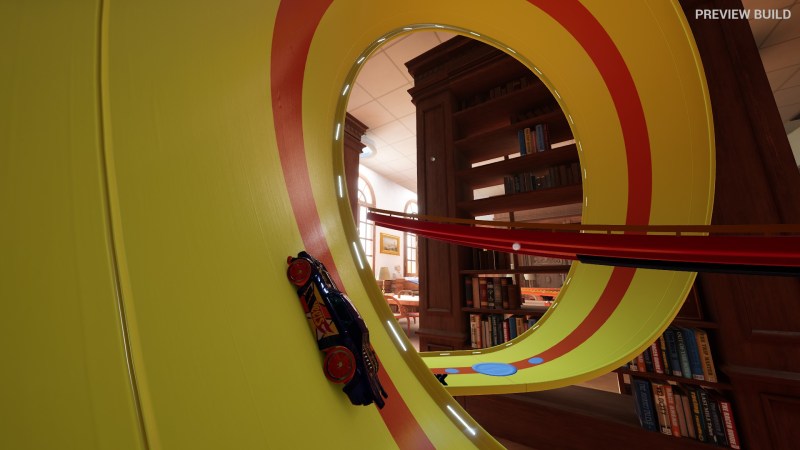 Nevertheless, combining the pain-staking attention-to-detail with the gorgeous lighting and shading effects, and the really awesome reflections offered by UE5, the whole game just looks fantastic, especially for a licensed title. The environments are also well-designed and have objects throughout that make them feel huge and deep (especially considering everything is seen from a tiny toy’s perspective).

Using Nvidia Freestyle, there’s also a semi photo mode that allows you to get really close-up and admire all of the little details of the cars and the tracks. The reason why I call it a “semi photo mode” is that although it can be activated at any time, the game doesn’t make the HUD disappear when this is done. Thus, the only way to get a clean shot is to watch the replay of your last race and manually disable the HUD using the camera settings there. Hopefully this was just an oversight in the preview build, but if not, then the devs should certainly consider taking care of it in the full release. This is a title that I think will get just as much love from the photo mode community as is the case in Forza Horizon. 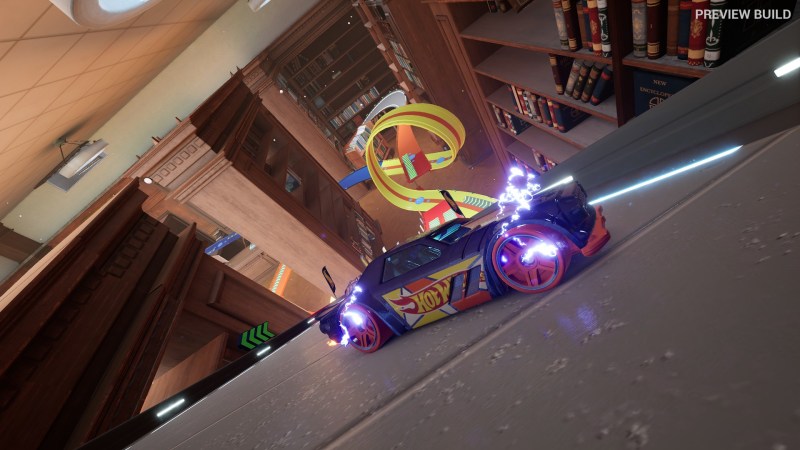 With so many cars to collect and tracks to conquer, I believe Hot Wheels Unleashed has some serious replayability potential. Not to mention that there’s also going to be a Track Designer in the full game. That wasn’t available to try during this preview, but if anything like the official tracks can be created and shared, then I’m already more than excited to see what insane engineering feats the community will be able to pull off.

This small preview of Hot Wheels Unleashed has already proved to me that this is a great return-to-form for the franchise in the gaming world. It makes great use of a modern engine, has a lot of fan-pleasing cars, great track design, and just an overall really fun flow of mechanics. It stands out in the crowded sea of arcade racers not just because of its branding, but really because it’s a well-built game that properly captures the vision of its concept. Without any hyperbole, I can see Hot Wheels Unleashed going down as one of the most fun racers of 2021. 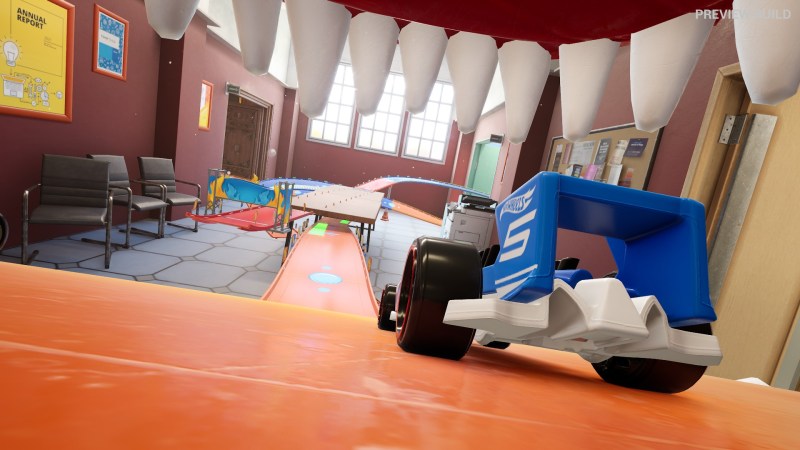