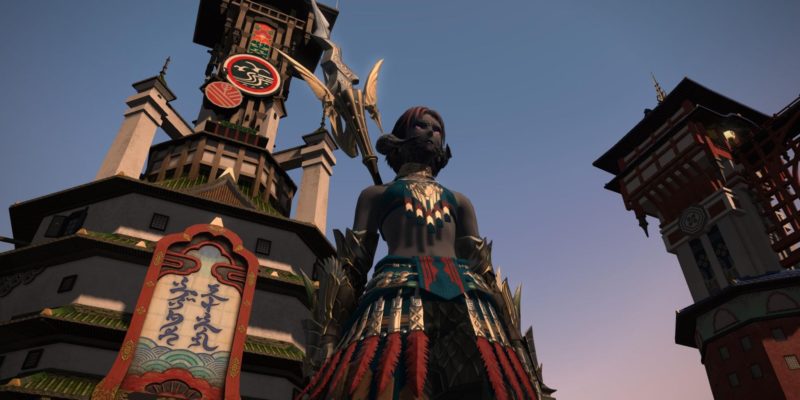 If you’re anything like me, you’re probably wary of Final Fantasy XIV: Stormblood spoilers. One of the things I like about Final Fantasy XIV is its storytelling, which – while a little weak in both A Realm Reborn and Heavensward – has its moments, and also tends to pick up a surprising amount in the patch quests which allow for more of a focus on characterisation, backstabbing, and politicking.

With this in mind, I’m going to spoil as little as possible. I haven’t played much Stormblood, yet: I’m level 62, I’ve done the first dungeon, and I’ve fiddled around with the new Red Mage and Samurai classes. Nonetheless, if you care about the story and haven’t at least finished the post-Heavensward patch quests that lead up to Stormblood, you might want to come back to this later. That aside, I’ll be giving as many warnings as possible. 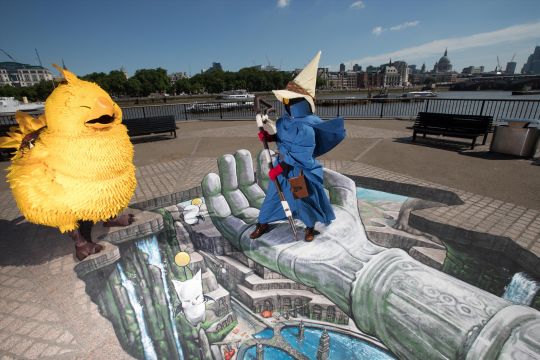 Spoiler warning: it turns out that Rhalgr’s Reach is located directly below London’s South Bank. (Photo credit David Parry/PA Wire. “Passersby and fans of the game stop to admire a mysterious portal created to celebrate the launch of Final Fantasy XIV: Stormblood.”)

(This is very much an aside, but yes, I’m pretty certain the protagonist – or mine, at least – is nuts. Mostly silent, but reacts to the prospect of taking on a creature of deific power or a continent-shattering robot with nothing but glee. It took me awhile to notice this, but now that I’ve seen it, I can’t see my character in any way other than as a lunatic with no concept of fear.) 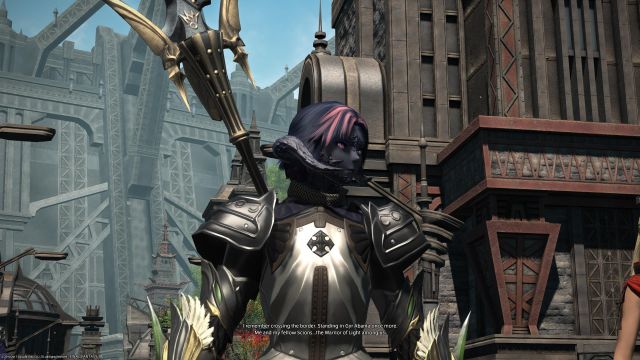 LOOK UPON THE FACE OF MADNESS, AND TREMBLE! BE YE GOD OR MORTAL, SHE SHALL PUNCH YOU!

After Heavensward focused on Ishgard and the Dragonsong War, dealing with heresy and giant dragons and ancient conspiracies and the like, it looks like Stormblood is taking us back to fighting against the Garlean Empire. After the events of patch 3.5, things between the Empire and the Eorzean Alliance have deteriorated, and Eorzea has been drawn into the fight to liberate Ala Mhigo from the Empire’s control. So: WAR! Sort of, anyway.

That’s not quite it, though, because Doma – a country that is clearly Not Japan – is also under Imperial control, and stoking the flames of rebellion there is also a thing that you have to do. While Doma takes a little while to make its appearance, that’s the location of the new major city of Kugane, so I’m expecting to spend some time there.

The first few levels of Stormblood are very, very story-heavy. Expect a lot of conversations and cutscenes, with only a limited degree of actual fighting and exploring (unless you go off the beaten track and do some side-quests or levelling on your own, obviously). I’m mostly okay with this, although having only just finished the story-and-cutscene-heavy Patch 3.5 quests, I was hoping to be doing rather then watching. But eh, no big thing, and a lot of the cutscenes focus on characters who are significantly more fun than Alphinaud. These cutscenes also get exciting and flashy a lot sooner than expected. 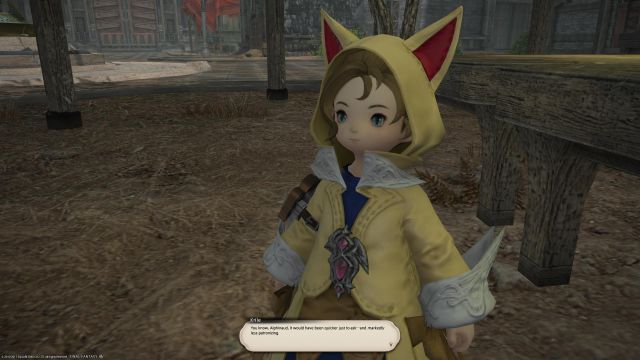 So far, too, the new regions look rather nice. Kugane is a spectacular city, and its Eastern stylings are a striking change from everything we’ve seen in FFXIV so far. The Gyr Abania area (in which Ala Mhigo sits) isn’t quite as stunning, being a little bit more on the “brown” side of things, but it’s got some rather lovely bits too – the outpost of Rhalgr’s Reach, in particular.

I’ve danced around the story and the quests enough, and while I do intend to talk about the first dungeon, I’ll do that at the end so those who don’t want to hear about it don’t have to. Instead, let’s talk about the new classes and the changes to the old.

My predictions on how they’d play aren’t actually too far off. The Samurai feels a little bit like a more complex Dragoon, with different rotations stemming from the same opening abilities, but still very much a melee-focused fighter capable of outputting some tremendous burst given the time to build things up. And yes, it’s all very cool, and the Samurai kit (and trainer) are both fantastic. 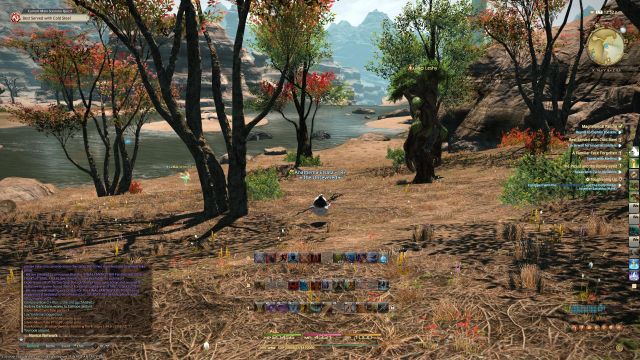 Don’t get me wrong – Gyr Abania really does have some lovely sights. This game has a sightseeing log for a reason, after all.

Red Mage is the one I’ve decided to put some time into levelling up, though… partly because I already play Dragoon, so having a DPS role that seems to require some brains would be a nice change of pace. I’m not going to lie and claim I’ve figured Red Mage out at all, but I do love having to think fast about my Dualcasts, while balancing out white magic and black magic.

Red Mage spells either raises your white magic or black magic counters, and keeping them within a certain level of balance matters. These counters can then be expended to unleash particularly powerful attacks – which, so far, tend to be melee combos that let me dash in, unleash a few powerful rapier strikers, and then leap away – at which point you’re back to distant spellcasting once more.

Making this more complicated is the Dualcast system (or whatever the hell it’s called, because I’ve seen it referred to by a few names and I’m damned if I can remember what it’s actually called now). Every time you cast a spell, your next spell has a cast time of zero. This means you want to alternate between spells that have a low cast time, and those that have a ludicrous high cast time – and as some of the Red Mage’s damage spells have cast times of around five seconds, that’s not too hard to do. 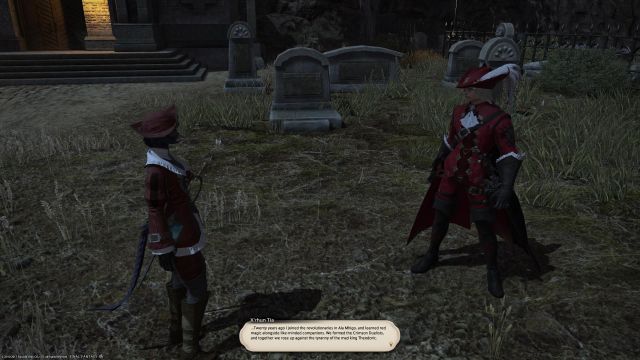 Not a big fan of the way the armour looks, but eh.

But it’s more complicated than that, too, because Red Mage spells have a chance to proc other spells. You just want to alternate between your basic Jolt spell and one of the spells with a longer cast time, buuut that second spell might let you cast a third, significantly more powerful spell. If you decide to throw that in, then that’s going to mess with your rotation. That one will have a cast time, and then your next Jolt will not. Remembering this and making sure that every other spell should be one with a low cast time is what makes this class a bit of a juggling act. But, y’know, one which I love. I fully expect to horribly screw this up many times.

Old classes have also taken a bit of a beating in the 4.0 patch, with a huge amount of abilities either outright removed, or switched over to “Role”. I’m going to play around with these a lot more in future, but the general ideas are to keep more information visible on screen at once via new trait bars (showing Blood of the Dragon timers for Dragoon), remove a lot of redundant abilities, and set certain abilities as “Role” abilities available to all Tank/DPS/Healers rather than requiring you to level up a second class and use cross-class stuff.

Alright, enough waffle. Let’s talk about the first dungeon. If you want to go blind, then stop reading now! 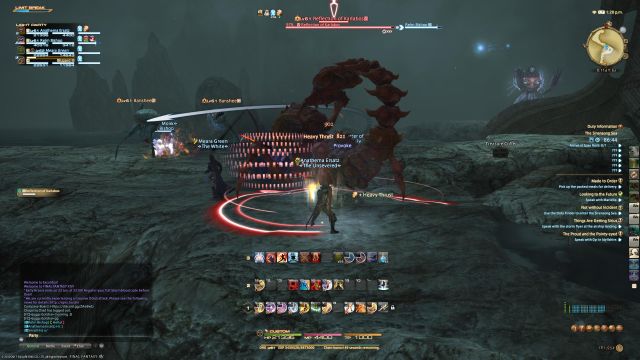 I might be picking up on the FF5 vibes a bit more because the Four Job Fiesta is currently going on, but still…

So far, Stormblood has given me a huge amount of Final Fantasy V vibes (Omega and Shinryu instigating the plot being the tip of the iceberg) and this first dungeon really kicked them up a notch. For starters, Karlabos turns up as one of the non-boss foes, and this first dungeon is pretty much a ship graveyard.

In any case, it’s not a particularly tricky dungeon, but it does have some entertaining boss mechanics and a rather unique atmosphere. The second boss is all about inflicting magic vulnerability debuffs on your party, and getting out of these ASAP to prevent them stacking too high is the crux of this fight, so that his AOE attacks don’t then wipe you all out or cause your healer to have an aneurysm.

The third and final boss has a much more interesting mechanic, creating zones on the ground that you really want to stay out of… and then forcing your party to either move forwards or backwards. It’s a nice twist on the “turn away from the boss” stuff we’ve already seen a few times, as you walk halfway across the battlefield and – if you’ve positioned yourself properly – narrowly avoid walking into one of those zones.

I forget where I was going with this, but yeah, Kugane’s lovely.

It’s not a difficult fight (or, indeed, a difficult dungeon) if you’re used to Final Fantasy XIV, but then I doubt it’s meant to be. As Stormblood‘s opening piece of group content, I suspect it’s designed to gradually reintroduce returning players to the concepts of the dungeons. The fact that it managed to be actually entertaining is, however, quite a plus.

I can’t really give any sort of verdict on Final Fantasy XIV: Stormblood yet, so my current thoughts are pretty predictable. It hasn’t done anything particularly out of the ordinary thus far, but it’s also yet to annoy or upset me. A few hours in, it feels like more Final Fantasy XIV – which is not something I’m about to complain about.

More Final Fantasy XIV: Stormblood thoughts to come over the next few weeks, I’m sure.