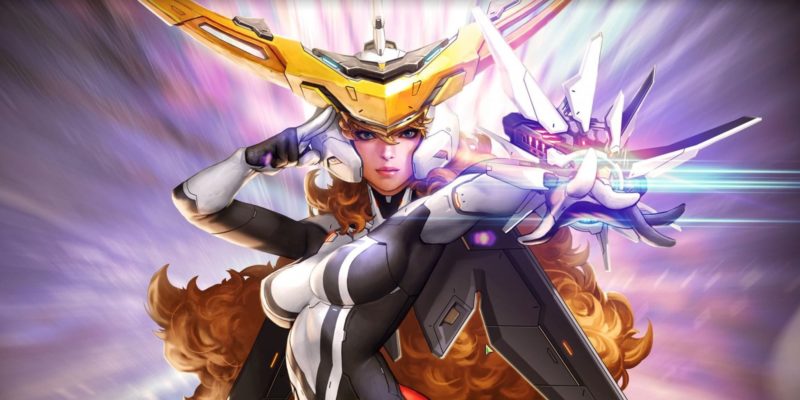 I don’t know where the hell to begin with Master X Master. It’s ostensibly a free-to-play MOBA (no, please, keep reading). But the MOBA bit aside, it’s also got some emphasis on solo play, co-op play, a story, an arena mode which lets you just PvP it out, and… oh. Right. Okay, so it’s sort of like Battleborn, the rather decent game that had the misfortune of launching in the exact same week as a Blizzard title.

Speaking of Blizzard titles, Master X Master takes a bit of inspiration from Heroes of the Storm, in that it unites characters from across multiple NCsoft titles (Blade & Soul, Aion, Wildstar, etc.) as playable “Masters” – although it also has some unique originals. These aren’t really characters I’m familiar with so it doesn’t mean much to me, but it is nice to see some City of Heroes characters turn up again. 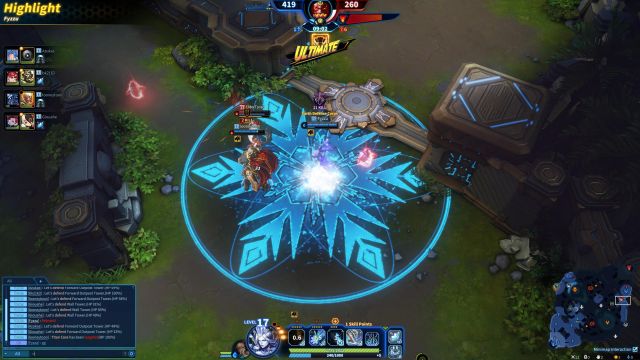 Also, I dig the art style, especially stuff like the comic-book style text when using an ultimate.

The fluff aside, there are two big “things” about the way Master X Master plays. Firstly, it’s all very action-y. While standard RTS-style controls are available, played with direct WASD controls is far more advisable, as positioning, jumping, and evasion abilities are all essential. So, too, is aiming your auto-attacks – which, again, is far easier using WASD/mouse rather than mouse-only controls.

Secondly, and more uniquely, you pick two heroes instead of one. At any moment, a flick of the mouse-wheel tags out your current character and switches in your new one, removing crowd-control effects and replacing your health and mana and whatnot with theirs – and, obviously, giving you an entirely new set of abilities.

This isn’t limited, either; you’re not restricted in any way except by which characters you have unlocked. You can combine a close-range assassin with a long-range sniper, or a support with a tank, or anything you like. Wonderfully, this opens the system up for some impressive combinations: you can, for instance, cast an icy slowing shield on yourself with one character, and then immediately tag in a melee bruiser to make use of it. Working out what combinations work best for your playstyle and allow for some impressive tag-in moves is part of the joy. The wealth of properties to draw from also means that there are characters of every shade and colours, from superheroes and cyborg boxers to… sapient cats and a photographer? Huh. 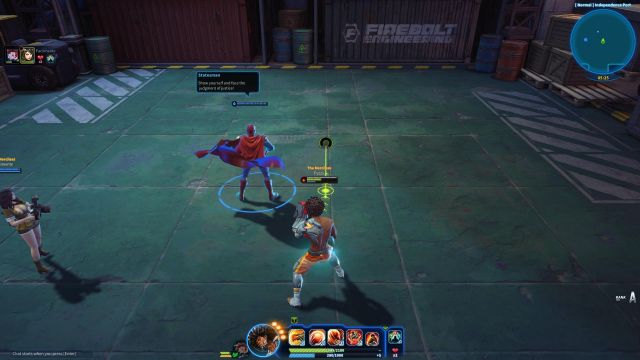 It’s weirdly nice to see Statesman again. City of Heroes may be dead, but I’m glad it lives on in little ways.

The MOBA side of things is also a little more action-packed than I’m used to, with an emphasis on roaming and objective-taking that possibly surpasses even Heroes of the Storm. The laning phase (the period in which you sit in one lane, hitting creeps and getting experience) lasts about three minutes, because that’s when the absurdly powerful objectives start spawning.

The first of these are a pair of altars at the sides of the map, which – when activated – send an angry, stompy golem-thing down the nearest lane, and if left unchecked they can wreck half of a base. Once one team acquires enough points (from last-hitting or player-killing), a Titan spawns and storms down the middle lane. And should a team acquire enough Titan Shards, from map objectives or killing enemy Titans, then one player can transform into a Titan and becomes entirely capable of murdering the entire enemy team, or the entire enemy base, by themselves.

As MOBAs go, it’s simple but deceptively complex. You still do last-hitting and fighting and levelling your skills and stats, but you don’t need to worry about buying items, and the controls make the combat feel a bit more like an ARPG or a twin-stick shooter than a traditional MOBA. You do, however, need to have excellent map awareness to pay attention to all of the relevant objectives, and there’s pretty much an entire meta-game in setting up a pair of Masters that work together effectively. I like it rather a lot, and the Masters I’ve played have been enjoyably varied. 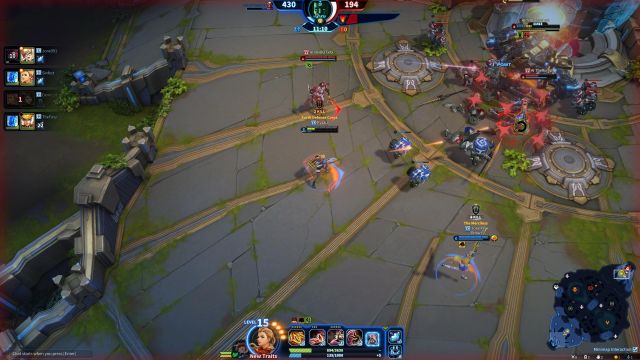 A flick of the mouse-wheel, and I can switch from my gun-wielding skirmisher to a speedy, blade-wielding assassin.

The PvE side is a little harder to judge. Unless you’re lucky enough to have a “ticket” that lets you choose a stage at will, you’re randomly thrown into one, which doesn’t make for the easiest time keeping track of the story (assuming, indeed, that it does actually progress through these). Once in, it’s all very ARPG: roam through the level fighting enemies and dodging attacks. On completion, you pick random rewards from a selection, with the number of choices you get determined by how well you performed.

Actually, ARPG is one way of putting it, but “MMO dungeon” might be better, and I suspect that this is how it’ll function on higher difficulties. There’s some of the same stuff in terms of recognising patterns of attacks and learning how to deal with each encounter, and as the higher difficulties also require more players, I’ll take a guess that party composition is also going to matter quite a lot. To me, the MOBA side feels more fleshed out, but the PvE stuff is certainly a fun diversion, and some of the challenges – like beating a boss without taking damage – are rather fun to attempt. 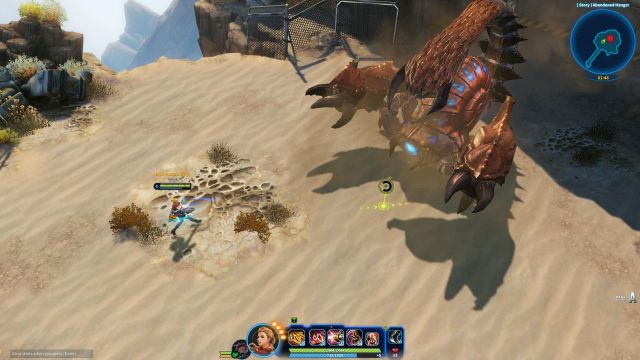 This big chap here is a boss, by the way. Just saying.

The third “part” of Master X Master, such as it is, is the lobby area. This is mostly filled with people spamming emotes and is very annoying, but it’s also where you get to be utterly overwhelmed by currency systems. You have Nodes (think Runes or Masteries from League of Legends – they boost your stats, generally speaking) which you craft. Crafting them requires resources. Those resources need to be purchased or traded for, using the various tokens you get from completing challenges or playing games. This system is terrifying and it’s hard to know what actually matters, but at my idiot newbie level, it’s thankfully pretty easy to just focus on the stuff that seems good and ignore the rest.

So Master X Master has a lot of content and it’s got some really unique twists on the usual formulae, with Master switching being incredibly novel, but there’s one thing I haven’t touched on: the free-to-play stuff. This is where, right now, I have some problems. 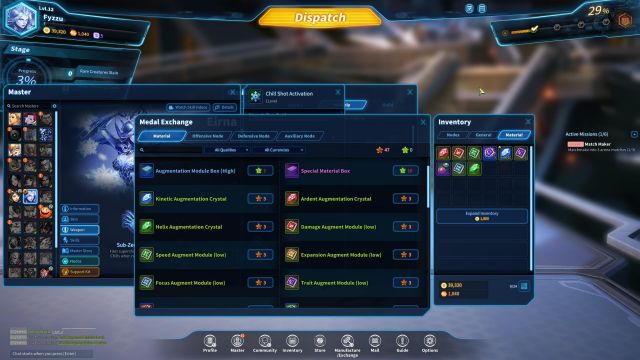 Oh good grief. All I wanted to do was upgrade a character. Send help.

Firstly, Masters are expensive. Like, really expensive. If I can count correctly there are currently 34 in game, and of those, 19 of them cost over $10 each. Considerably more, if you don’t bulk-buy the magic in-game real-money currency. Right now, the biggest coin bundle is $99.99, which nets you 27,000 X-Coins. Of those, 7000 are a “bonus” for buying that many at once, which means $10 is about 2000 X-Coins. The most expensive Masters are about 3500.

Removing the bonuses, this means that one character – who you may not even enjoy playing, as there isn’t really a stand-alone test function – might be $17.50. (I’ll note that you can, once per day, use a character owned by someone on your friends list; and there is a rotation of free Masters – but these aren’t really consistent ways of trying things out.)

I don’t like this at the best of times (given the option, I much prefer to pay a single up-front cost to get everything), but usually you can slowly unlock them through gameplay. And, yes, you can do that in Master X Master, but this has problems of its own. 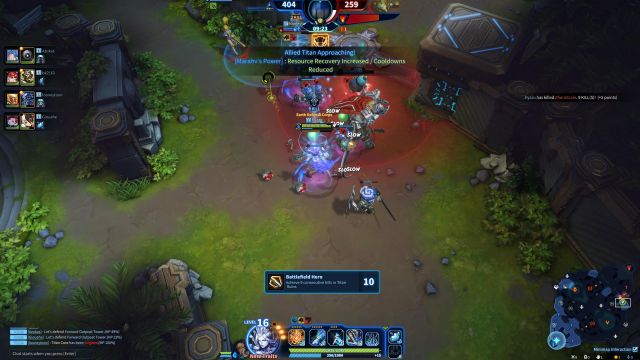 Of course, as with everything MOBA shaped, the visuals can get a little… busy.

The good: every time your profile levels up by doing in-game stuff, you earn a SOL; a currency used exclusively for unlocking Masters. Once again, they all cost different amounts, ranging from about two to about 13. This means unlocking most of them will take a lot of time, but I’m okay with that.

The bad: lots of them have unlock requirements. Initially, I thought that these were achievements which – on completion – would instantly unlock the Master, but no. They’re things you have to do before you’re allowed to buy them with SOL. And some of these will take a long time. As an example, the newly released Ghost Widow requires you to get 30 Spider’s Kiss items from the Independence Port stage. The Independence Port stage is only occasionally open, and the Spider’s Kiss items are a random drop from the loot thing at the end. After running it a lot, I had eight of them. Mostly I’d get one. Occasionally I’d get two. Some runs I’d get none. 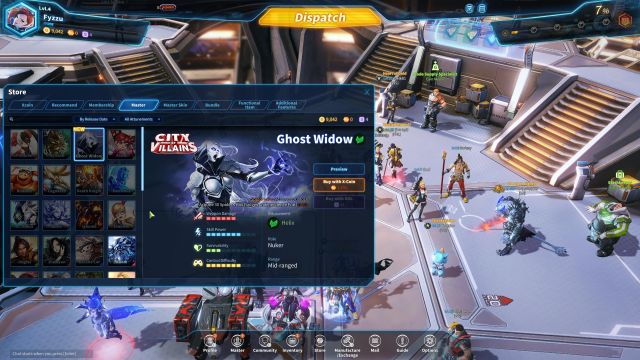 Thankfully, I realised my mistake before grinding out the remaining 22.

This feels arbitrary, annoying, and it’s a really unsubtle way of forcing people towards spending money. Master X Master obviously needs a sustainable business model, but if a game is free-to-play I’m normally happy to financially support it if I feel like they’re treating me fairly. Maybe that’s just me, of course, but I’ve spent plenty on free games because I enjoy them and because I wanted to support their continued development. In this case? Not so much, and that’s not because of the game itself.

There’s also a subscription feature, which – again – feels pretty expensive for what it offers. $10 a month or $100 for a year, and this basically gives you bonuses to login and match rewards, a couple of extra Masters in the free rotations, and some discounts. If it gave bonus SOL every month then it might be a little more worthwhile, but currently this deal seems rather unimpressive.

I realise I’ve spent half of this article talking about the business model, but right now it is honestly the single biggest problem that Master X Master seems to have. I can’t speak to balance, but the game itself is fast-paced, entertaining, and does some genuinely unique things. I’d earnestly recommend giving it a try (and completely ignoring all the currency and crafting stuff until you’ve played for awhile) because it seems to be carving out an interesting little niche for itself in an increasingly crowded genre, with additional attempts to branch out into areas like PvE. I just hope that things ease up a bit on the wallet-squeezing front, because that leaves a pretty foul taste in my mouth after playing what’s otherwise a neat little free-to-play title.