Genshin Impact is one of the trendiest gacha games in the market, with stunning character designs and animations that remain popular two years after its launch. Yet as beautiful as the game can be at times, it is still a gacha game at heart and designed to suck money away from your wallet. Naturally, 5-star characters are the most desirable units to pull in the game, which also makes them the most challenging and potentially expensive characters to gain as well. However, Genshin Impact has a “pity system” that guarantees you will earn a 5-star character at a certain point — and here’s how to check the counter.

With the pity system, players will gain stacks towards this pity counter for every character they pull that is not a 5-star unit. A “soft pity” will hit at around 75 pulls, dramatically increasing the chances of earning a 5-star starting at this point. However, there is a hard cap at 90 pulls, guaranteeing you a shiny new 5-star unit when you reach the end. (Note: Most players will get their 5-star unit at around 75 to 85 pulls, so it’s extremely rare that you’ll have to reach 90 pulls).

How to check your pity counter in Genshin Impact

Players who want to track how many pulls are required for the next 5-star will have to do some manual counting and math for themselves. While Genshin Impact does not count what your pity is, you can manually track it yourself as Genshin Impact does provide a “pull history.” This history simply lets you check which units or weapons you pulled while playing the game, allowing you to manually count your pity yourself.

To check your pull history, press ‘F3’ to enter the wishing menu. Then, click the ‘History’ button on the lower-left side of the screen. When you click ‘history,’ you will see your pull history organized in tables. These tables will list five pulls per page. 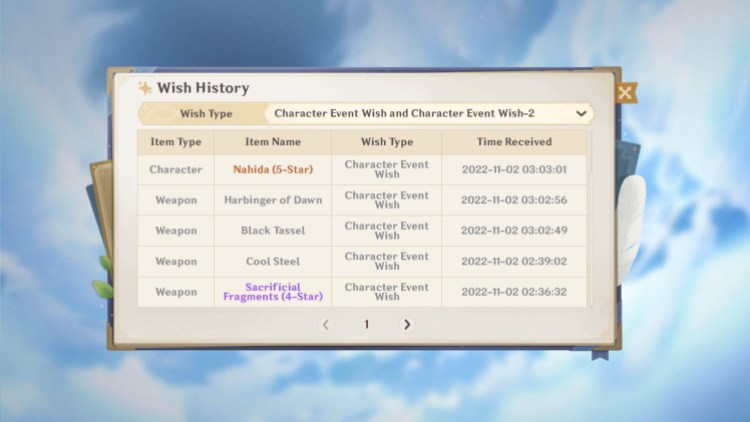 How to build the best Modern Warfare 2 Fennec 45 class

Genshin Impact: How to recover your account if hacked

By Daniel Pinheiro9 mins ago
Guides