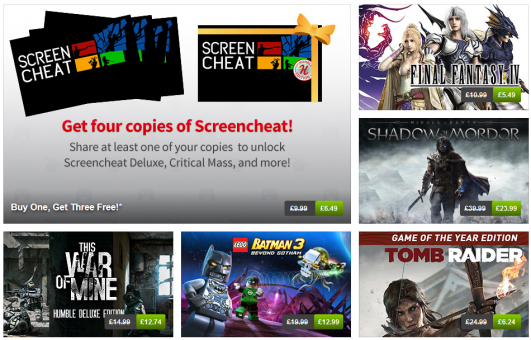 Now that we’re done with Black Friday, the Humble Store have decided to kick off the Christmas sales.

The Humble Store Winter Sale runs from today through to 22 December, giving you two weeks of daily deals. Naturally, today offers both some staggeringly good discounts and a few that are slightly more rubbish.

The big highlight for today is Screencheat, a multiplayer shooter in which every player is invisible, but every player can also see the view of every other player. In short: you have to watch the “screens” of your opponents to figure out where they are. If you were one of those screenwatching bastard in Timesplitters or Goldeneye, then it’ll likely bring back some fond memories. It’s discounted from £9.99 to £6.49, but that £6.49 actually gives you four copies of the game, so you can share them out to people you’d like to shoot – and sharing one of those copies will also net you a free copy of Critical Mass.

In terms of “wow that’s cheap”, Deadly Premonition: The Director’s Cut is discounted from $19.99 to $1.99, so there’s basically no excuse for picking up the surreal survival horror/murder mystery title. What else? Well, LEGO Batman 3 is down to £12.99, which isn’t bad for something so recent. The PC edition of Final Fantasy 4 is down to £5.49, although I have no idea how decent the port is. Shadow of Mordor is £23.99, and Tomb Raider Game of the Year Edition is £6.24, but I’m sure I’ve seen both of those for cheaper. Planetary Annihilation is £7.66, Natural Selection 2 is £2.49, and… you know what? Have a look for yourself.

There are currently 500 games on sale, but since there are also daily deals for the next two weeks, you might want to employ the Steam Sale rule and not actually buy anything until it’s a daily deal. Either way, have a look at the sale over here.