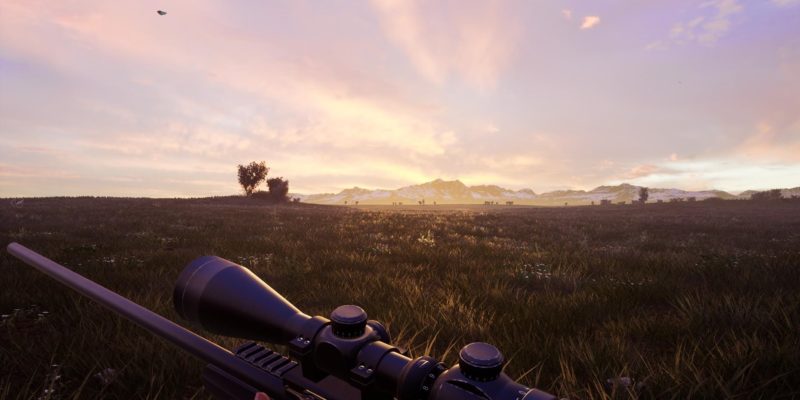 It’s taken some time, but I think we’ve finally come full circle. If memory serves, the very first feature I wrote for PC Invasion (long before it was even called that) was a preview of theHunter. Eleven years on and I’m writing a preview of Hunting Simulator 2. Let’s just hope this isn’t a bookend, eh?

In those intervening years, I don’t think I’ve written about a single hunting simulator. So no, this won’t be the most in-depth analysis of how this hunting simulator compares to every other released in the past decade. But I can offer some thoughts and give impressions from a fairly casual perspective. 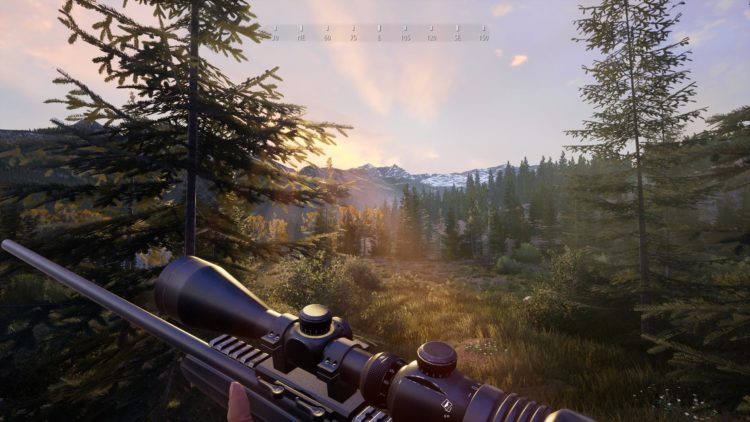 Some of the up-close foliage isn’t great, but the general atmosphere is breathtaking.

First and foremost, one of Hunting Simulator 2‘s big unique features is the addition of a canine companion. And yes, you can pet the dog. In the full version there’ll be three types of dog available, each with their own abilities. The two not in the preview build are retrievers, which can grab any birds you down, and pointers, which can quietly point you towards quarry.

The preview build, however, contains only the hound, which tracks and distracts big game. Specifically, it offers a beagle. I named it Cam after PC Invasion’s editor-in-chief. What better name is there for a creature that I can kinda boss around even though it has absolutely no good reason to listen to me? Here he is, in all his fuzzy glory: 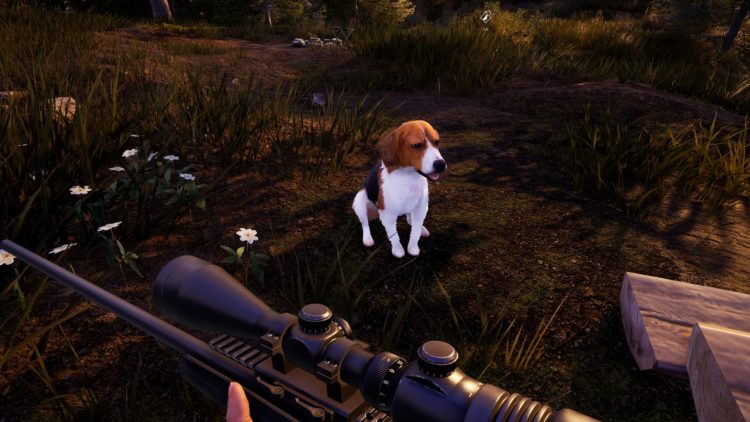 No, you cannot shoot the dog. Yes, you can pet the dog.

Your dog buddies all have stats. These increase based on their finding tracks and signs of animals, and they’ll also become more driven if you praise them — a weird but excellent little extra. Regardless, the hound is useful for finding tracks in the often thick undergrowth and leading you in the right direction to find more. It can also bark to distract larger game, letting you line up a shot.

A walk in the park 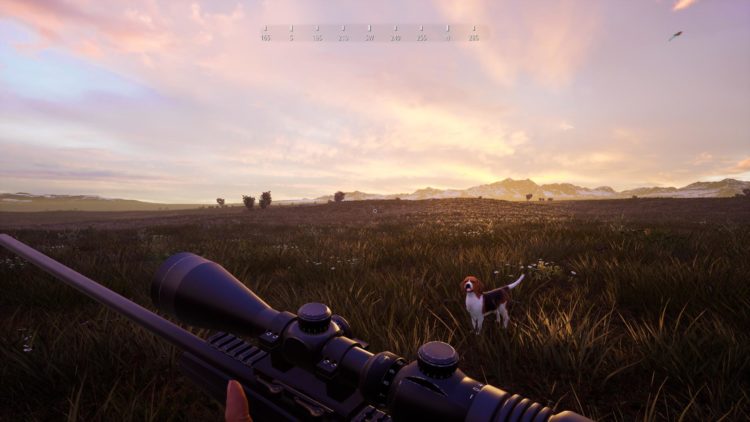 The Meadows are a vast, wide-open plain, resulting in a lot of easy-to-spot game.

The preview build of Hunting Simulator 2 offers up the Colorado environment, split into two distinct areas. While the remaining two environments (Texas deserts and European forests) should vary quite heavily from what I’ve seen, the two Colorado maps are pretty individual by themselves.

The Roosevelt Forest is what I’d tend to think of when it comes to a hunting sim — all hills and forests and utterly gorgeous god rays shining through the leaves. It’s also the more challenging and “hunting simulator” of the two, with plenty of areas for game to hide and very limited sightlines.

The Pawnee Meadows zone, on the other hand, is a giant plain. Sweeping sightlines, numerous towers and blinds, and abundant wildlife. It’s a lot easier to find game here – either through tracking them or simply by waiting in a stand. 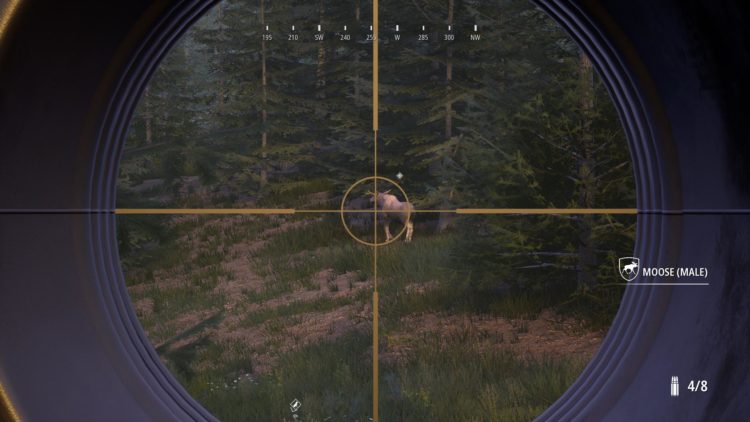 Even in the Pawnee Meadows, though, accuracy and patience are king for Hunting Simulator 2. You need licenses to hunt appropriate animals, but you’ll also be fined for any other infractions. Too many shots counts as an unethical killing. Not bagging something you hunt is a fine, which is occasionally annoying without a retriever since you can’t swim and birds like to land on water.

You need to take your time, line up your shot, and hopefully not just wound your quarry and then have to track it halfway across the map. Still, the abundance of easy-to-spot game makes Pawnee Meadows a bit more of a shooting gallery.

Roosevelt Forest, on the other hand, is weirdly soothing. There’s a lot of slow walking in the forest and carefully tracking footprints and droppings, or sitting in a stand and just… waiting. Successfully hunting something here is tricky (for an idiot like me, at least) and incredibly satisfying to get right. 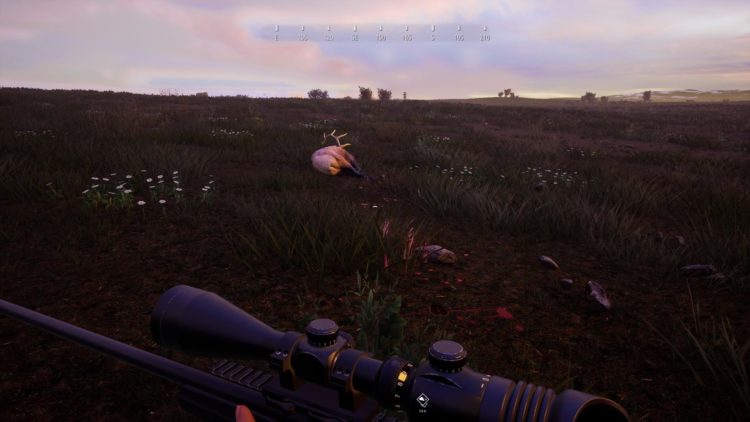 Hunting Simulator 2 also has the requisite hunting tools. Animals can see, hear, or smell you, and there are various ways of accounting for this. To hide yourself, you can purchase tools to eliminate your smell or equip clothing suited for different terrain and weather types. You can use a spray to check the wind direction. But even then, you still need to walk softly to avoid spooking anything.

I’ve had a go with one of each of the weapon types – rifles, shotguns, modern sporting rifles, and bows – and they largely handle pretty differently, although there’s thankfully a full and free shooting range to practice with each weapon. I’m very thankful for that, considering how utterly crap I am with a bow. Scoped rifles are pretty much “point and shoot,” although you’ll have to account for a drop over range. Shotguns take a bit more time to get used to, and bows have some serious drop over range. So, again: praise the shooting range. 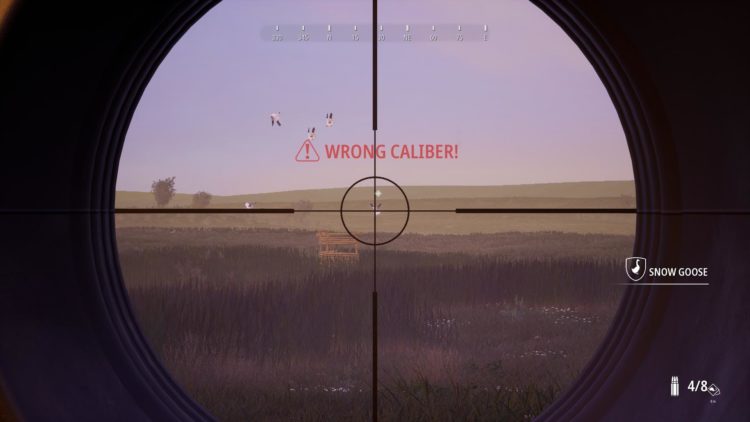 Hunting Simulator 2 is very keen on letting you know when you’re about to do something stupid or illegal.

For a game with “simulator” in the title, though, there are some accessibility options in Hunting Simulator 2 that I really wish I could turn off. They’re helpful for newbies like me, but more experienced players are likely to find them a bit overbearing.

The compass at the top of the screen can be disabled, which is excellent. But tracks and the like have a periodic shine, like loot in a stealth game. Animals you look at are briefly “tagged,” with a color-coded indicator showing their alertness. The map contains your real-time position. Etc. As noted, all of this is mostly fine, especially for me – but for a real orienteering experience where you need to pay full attention and don’t have any guides or automated assistance, I hope options are added to disable this stuff. 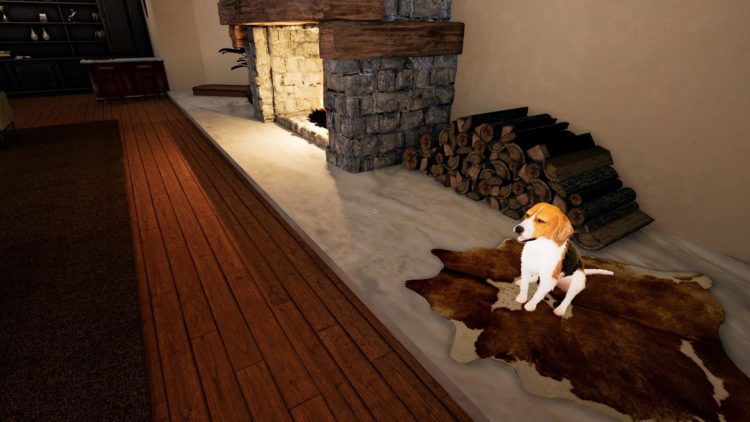 Nonetheless, the core of Hunting Simulator 2 is just dandy. The cyclical gameplay loop of carefully and patiently hunting, bagging your prey, selling it for credits or taking it as a trophy, and then purchasing better gear before once more heading out on the hunt is devilishly compelling. The environments are lush and beautiful, and (as far as I can tell) there’s a lot of attention to detail when it comes to the licensed guns and weapons. Without spending a lot longer in this build I can’t speak to the AI quality, but I can at least confirm that animals get properly alerted and spooked.

If the remaining environments offer up unique experiences, and if some of those more overt guiding options can be disabled or toned down, I don’t think I’ll have much to complain about. I can’t speak to whether it’ll satisfy the true sim-heads, but for the slightly less expert crowd, I suspect Hunting Simulator 2 will provide a solid and satisfying trial of man against nature later this year.

Here are the launch times for Halo 2: Anniversary on PC tomorrow