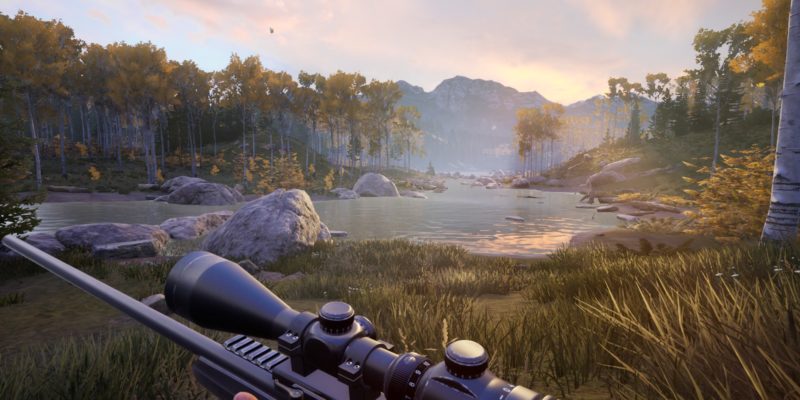 The term ‘simulator’ is thrown around in the games industry an awful lot. However, in most cases its more of a suggestion than a definition. Games like Euro Truck Simulator and PC Building Simulator sacrifice a large degree of their realism to improve gameplay. But what if a simulator game didn’t do that? What if the priority above all else was delivering a purely realistic experience? Well, that’s exactly what Hunting Simulator 2 does.

Hunting Simulator 2 is Nacon’s latest in its extreme sports franchise. The premise is rather simple: you head out into the wild and hunt a variety of animals. This can be considered a direct competitor to other hunting games like the critically acclaimed Hunter: Call of the Wild.

Hunting Simulator 2 doesn’t have a core progression system tied into it. Instead, a player’s success is measured by the in-game economy. You earn cash by selling animals you’ve hunted. The value of each animal is affected by a variety of factors such as age, how damaged their body is, and what animal they are.

And yet making money is not as simple a task as just shooting some animals and selling them. When hunting any animal there are several criteria that must be met to avoid being handed a penalty. Are you using the correct caliber bullet? Do you have a license to hunt that animal? Is that animal a protected female? Failing to meet all of these requirements can bear serious consequences. 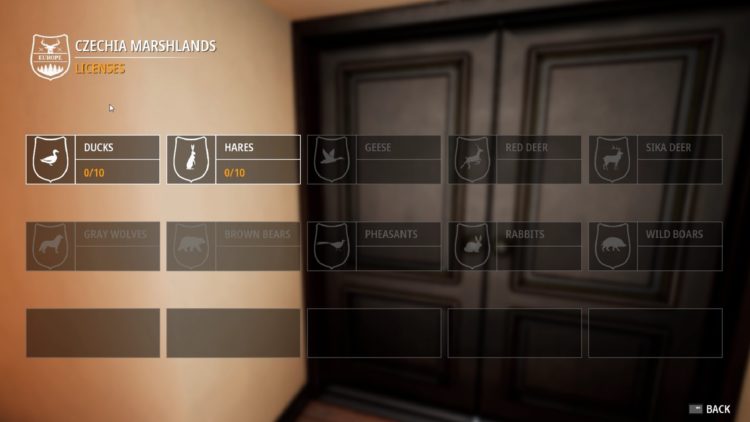 Not having licenses will leave you with limited options as to what you can hunt.

On one hunt I was chasing a flock of ducks with my trusty pump-action shotgun. It was the correct shell for the animal and I’d purchased a license in advance. I took the shot, took out a group of them, and bagged what I’d hunted. I headed back to the inn to count my earnings to see I had literally zero dollars to my name. It turns out I’d left two duck unbagged and was handed a whopping penalty as retribution.

The economy is brutal. Realistically speaking, you can’t afford to make more than perhaps one mistake in 100 successful hunts. I honestly don’t know how realistic that is but it’s certainly difficult to work around in a video game. Regardless, I suppose Hunting Simulator 2 has a surprisingly steep learning curve that might appeal to fans of this sub-genre.

But what about the hunting experience itself? To find and eliminate your prey the game provides a plethora of useful tools. First and foremost is the impressive range of 60 fully-licensed weapons you can choose from. These are split into rifles, shotguns, modern sporting rifles, and bows.

The balance between each weapon is fairly well done. Rifle and shotguns are easier to use but are only legal against a limited number of animals. This means you’ll need to purchase multiple of each to hunt everything. In contrast, bows and crossbows can legally hunt just about anything but have limited range and are far harder to use.

Hunting is undoubtedly slow. It’s not out of the question that when targeting a singular animal you’ll have to wait up to 30 minutes for a decent shot. Even then, the shot itself isn’t always going to be an instant kill. You may have to follow blood trails for a further 10 to 15 minutes for a second shot. 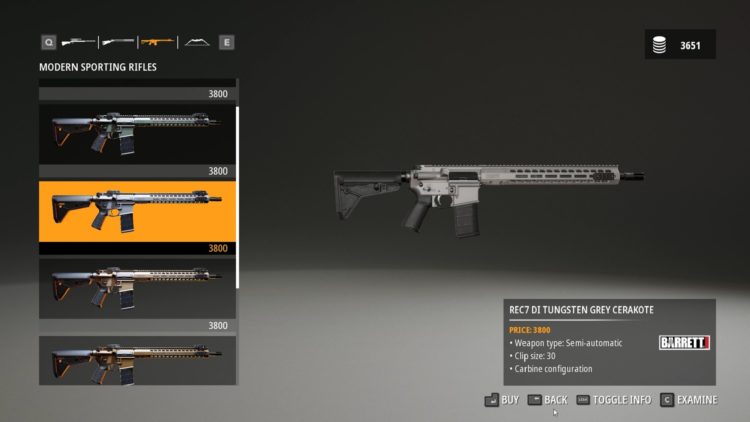 The gun collection in Hunting Simulator 2 is genuinely impressive and something even other mainstream shooters could learn from.

Thankfully, there are at least a good amount of ways to speed up target acquisition. Callers can be used to mimic an animal and draw out a nearby response. Meanwhile, scent lures are a great option for attracting an animal whilst camping an area with great sightlines.

And of course, there’s your furry companion. At the start of the game, you are handed a pet Beagle but, after saving up, you can opt for a Labrador or German Shorthaired Pointer instead. Not only does this mean you get a pet and praise a cute dog, but they’re useful for hunting, too.

These companions can track prey for you, distract big game, retrieve your kills, and point in the direction of a detected animal. Although, even with all of this, the process of hunting is still slow and can drag on after a while. Truth be told, I found Hunting Simulator 2 hard to play in extended sessions because so little tends to happen.

You’ll get the choice between six different hunting areas across three different regions. These are Colorado, Texas, and Europe. Of course, by “Europe,” the developer actually means the Czech Republic and Romania, seemingly.

Each region has its own list of animals and is generally split up into a flat area and a dense forest area. Which region you pick matters a lot as it’ll directly affect how difficult your time hunting will be. 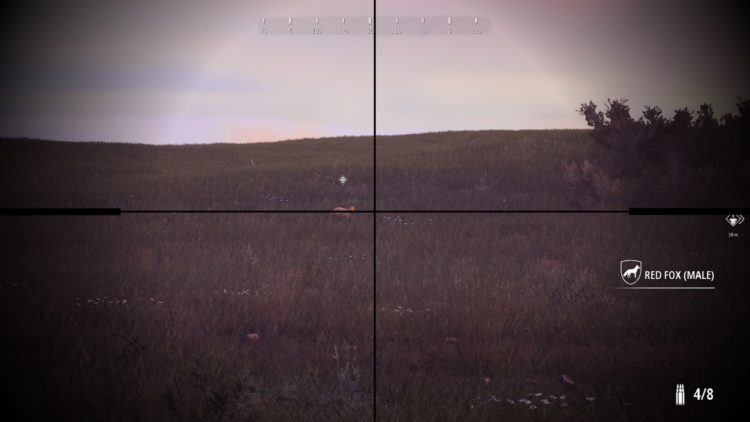 The gameplay is at its best when you finally get the opportunity to line-up a shot and deal some damage.

A flat open area like Pawnee Meadows is easy since you can spot animals hundreds of meters away with the naked eye. Contrary to that, a forest region like Harghita County can make it difficult to get a good line of sight even within 50 meters.

For a more authentic hunting experience, the forest is definitely the way to go. Despite being especially slow I did have more fun just because I got to use natural cover to close the gap on my target. In the open plains maps, it’s still slow but you don’t get the same enjoyment from tracking an animal.

Perhaps the most unusual bug or design oversight of Hunting Simulator 2 is that it appears to be stuck in borderless windowed constantly. There is an option to switch to full screen or regular windowed, but it doesn’t work.

This is unfortunate because, at least in borderless windowed, the gameplay is permanently locked at 60 FPS. I honestly don’t know if this is an actual frame rate lock or just a result of the lack of functioning full-screen mode. Given how consistently Hunting Simulator 2 can sit at 60 FPS with maxed settings, it’s obvious to me that my build could support far more if it was allowed to.

Also, the choice of key binds used in the menus is just bizarre. To enter the menus you press escape which is fine. But to go back to the last menu or close the interface altogether requires backspace, not escape. To add a waypoint on your map you don’t left-click but have to press shift instead. These menu controls are not reconfigurable, feel unnatural, and require you to use two hands on your keyboard when one should have been more than enough. 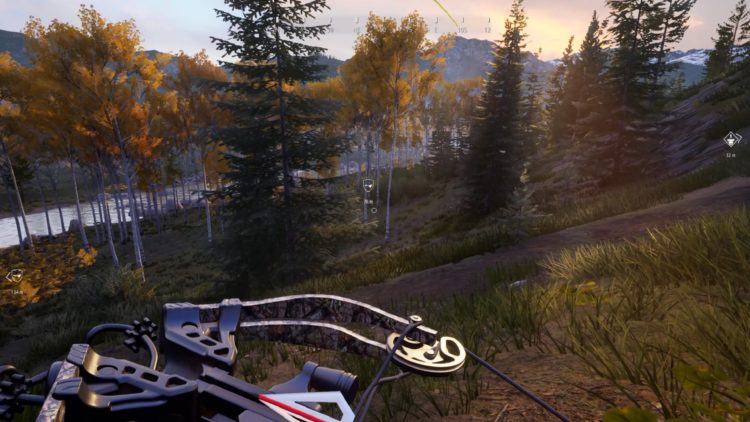 It doesn’t matter what game you’re playing, crossbows will always be fun to use.

I realize that individually none of these issues are game-breaking, but when put together they do raise some significant questions. The biggest being was this game actually optimized for PC? Because a locked 60 FPS experience with uncomfortable bindings suggests otherwise.

To be fair though, a lot of the expected PC FPS features are there. You have a good amount of control over its visual fidelity, which looks great by the way, resolution scaling, and a field of view slider that goes all the way up to 130 FPS. This is perfectly playable on PC, but I can’t help but have that gut feeling that optimal console settings was Nacon’s primary focus.

The actual process of actively tracking an animal, lining up the shot, bagging your prey, and cashing in is fun enough. However, just about everything else you have to do drags on and gets boring fairly quickly. Arguably, that’s accurate to what real hunting is like, but that doesn’t necessarily justify the pacing. Certainly, if you’re looking for a slower, realistic approach to hunting, Hunting Simulator 2 is decent enough. But as far as I’m concerned, this game ended up being a real snooze fest.

A respectable recreation of hunting that serves far better as a simulator than an actual game. For some, this will be exactly what you're looking for. For most, probably not.