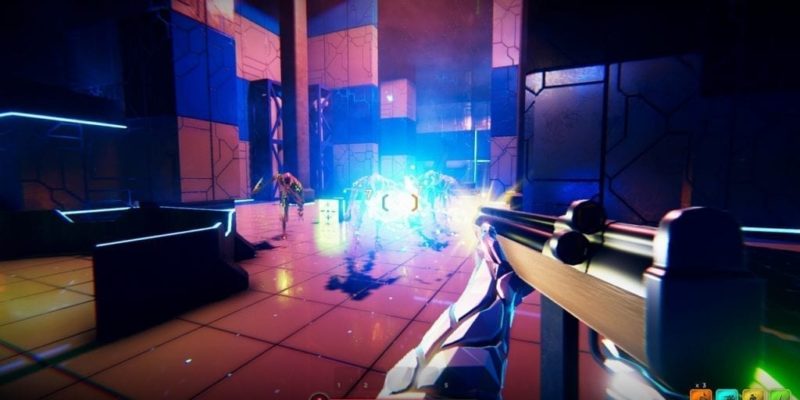 Humanity is screwed. An alien invasion looms on the periphery, poised and ready to wipe out the world’s population. There’s still some hope, though. Dewey Owens, a low-level intern at a weapons research facility, might just have the power to stop the aliens dead in their tracks. In Hypergun, players step into Dewey’s overworked shoes to try and create the ultimate alien-killing superweapon.

Hypergun is a roguelite first-person shooter that hinges on a central abstraction. Its core design, gameplay, and in-game fiction revolve around Dewey and his employer, DevTech. Although aliens threaten humanity, Dewey never square off against the otherworldly invaders. Instead, Hypergun throws players into a series of simulated levels that DevTech uses to test experimental weaponry. You’re an intern who intends to save the world, sure, but Dewey is more of a radical researcher than a proper action hero. 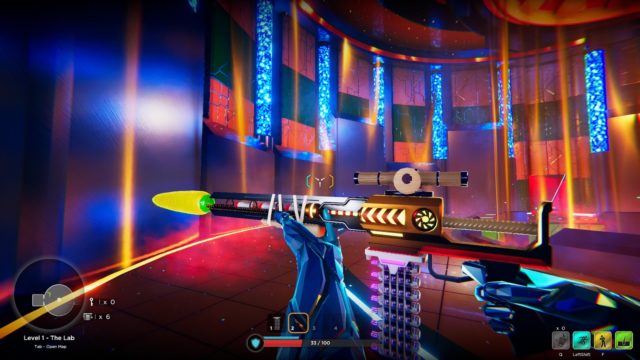 By grounding itself with this abstraction, Hypergun feels like a simulated shooting gallery. DevTech — and Dewey by extension — is committed to creating a perfect, alien-killing weapon.   The company’s simulation chamber allows employees to safely experiment with different attachments and weapon types without directly fighting any aliens. The waves of enemies that rush at players are nothing more but digital manifestations of a larger threat. The game’s modular guns — wild, unwieldy, and imaginative as they may be — are always hypotheticals. In Hypergun, each randomized run represents a potential solution.

Developer NVYVE Studios fully commits to this approach. There’s something special about experiencing a shooter through the lens of computer simulations. When the game’s enemies surround you it feels like any other FPS, but leaving the simulation chamber after a failed run and walking through the DevTech offices serves as a unique departure from genre norms.

Hypergun‘s greatest strength is its modular gun system. Dewey can unlock four different starting classes, each with their unique weapon. Once inside the simulation, finding different attachments dramatically alters the gun’s look and performance. Watching your weapon warp and evolve over the course of a run is endlessly entertaining. It’s clear that NVYVE knows how cool their weapons look, too, as Hypergun has a dedicated “check out my gun” button. The juxtaposition of standard attachments like a muzzle brake and over-the-top modules like a fishing harpoon makes for a game where absurdity is the rule, not the exception. Hypergun has more than 100 unlockable upgrades. Each one affects a weapon’s stats and appearance. The combinations feel endless, just like the constant deluge of digital enemies you face. 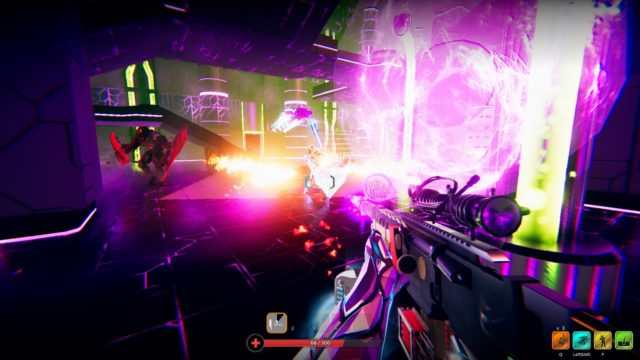 The scenery’s neat, but lacks much variety.

But as refreshing as its crazy weapons may be, Hypergun‘s levels and enemies quickly feel stale. In a sense, the game’s commitment to the simulated test chamber is also its biggest shortcoming. The randomly generated stages outstay their welcome. They lack variety in a way that the game’s piecemeal weapons rarely do. Each one of the game’s five stages has a specific theme and culminates in a level-specific boss fight. After a dozen or so runs, the process feels repetitive. Wielding a carbon fiber shotgun that shoots bouncing pellets from a corn-on-the-cob barrel is a novel experience. Fighting the same three enemies across a dozen rooms before squaring off a boss you’ve fought several times in a row is not.

Dragging levels and uninspired enemies wouldn’t be as big of an issue if Hypergun was a bit more polished. Although its angular, neon aesthetic works well (there are additional render types that change the game’s graphics, too) and chaotic weapon combinations are inspired, the actual combat lacks refinement. Shooting — the core action of any FPS — lacks a much-needed punch. Despite using deadly, highly experimental weapons, it feels as though Dewey is firing tennis balls at his foes. Similarly, enemies suffer from pathing issues and wonky hit detection. It’s not uncommon to clear multiple waves of baddies only to find a single remaining alien stuck in a corner. For immersion’s sake, it’s a glitch in the simulation. But in reality, it’s an annoyance. 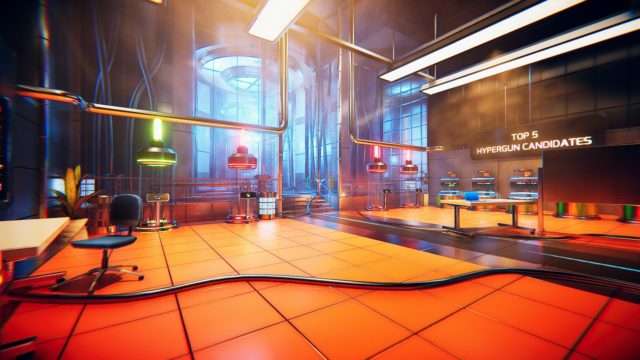 Exploring DevTech is a welcome distraction from combat.

There is more to Hypergun than modular guns and wave-based levels, though. Dewey can explore the DevTech offices whenever he leaves the simulation chamber. Scattered throughout the DevTech building are computer logs and sticky notes. Interacting with them shares some insight into the company’s corporate culture and adds some levity to the game. DevTech’s employees bicker with one another via email, leave passive aggressive notes on the break room’s refrigerator, and wonder how they’ll ever build a functioning hypergun. The office exploration bits are a welcome addition. Players can look at the weapons parts they’ve unlocked, study their alien enemies, or just bask soak in the steady silence of an otherwise empty office.

Hypergun is an entertaining shooter best enjoyed over short bursts. While there’s a seemingly endless variety of creatable weapons, grinding run after run gets old fast. Like DevTech’s inability to make the perfect superweapon, Hypergun lacks the punch and polish needed to elevate the game to greatness.

Hypergun's modular weapons make for wildly imaginative guns, but the game suffers from repetitive elements that drag this roguelite shooter down.

Get scared silly with the new Humble Spooky Horror Bundle

By A.K Rahming21 mins ago
Reviews