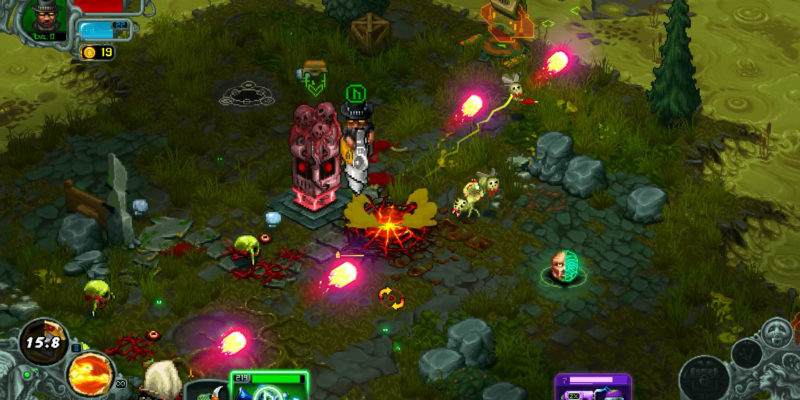 Moregames has been developing I, Dracula: Genesis for five years, and it has now released the retro-fueled roguelike in Steam Early Access. You can also take the game for a short test drive if you download the demo from GameJolt. The demo will give you 300 seconds to slay as much as you can.

Moregames describes I, Dracula: Genesis as a challenging, hard-as-nails roguelike that is not for the faint of heart. In other words, move any breakable objects far away from your PC.

Players will take control of genetically modified Hunters capable of surviving on the surface of post-apocalyptic Earth. These Hunters, heroes to some, will rise from the depths of the Earth – which is presumably where humanity lives now – to battle monsters, demons, aliens, and ravenous robots. You can check out some of the enemies on the game’s website.

The beginning of Early Access gives you five Hunters to choose from, each with a unique set of slaughtering skills. Moregames intends to develop over 10 Hunters by the time I, Dracula: Genesis leaves Early Access.

There are currently over 120 enemies and 20 bosses for you to lay waste to. And to assist you in the laying of waste, you can choose from an arsenal of over 1,200 weapons, skills, perks, consumables, and passives. Combining these in different ways will result in vastly different gameplay.

And this is just the beginning. Throughout Early Access, Moregames plans to add new Hunters, new worlds, and hundreds of more items to I, Dracula: Genesis. Plus, it will have some nostalgic mini-games. Did anyone catch that brief clip in the trailer that looked a lot like Doom? Expect more of that.

Moregames plans to release the full version of I, Dracula: Genesis in summer 2021. If you like what you’ve seen so far, you can purchase it for PC through Steam for $15.99. It will be slightly more expensive once it launches. You can also add the game to your Steam wishlist to keep up to date with its development.

By Michael Feghali22 mins ago
Hardware