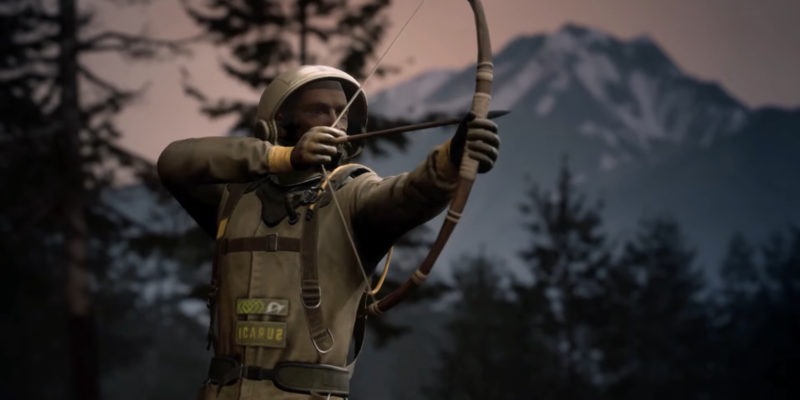 Have you been wondering what Dean Hall, the maker of DayZ, has been up to? Well, he’s been underway on a new survival game with sci-fi themes. But there are still bows and arrows. I’ll let you figure that one out yourself. Icarus got a reveal trailer today, courtesy of the PC Gaming Show.

Icarus will be free to play when it launches. However, the game is very early in development, and won’t be out until 2021 — according to PC Gamer. But the trailer does show off some things you can expect once it does land. The sci-fi themes are prevalent in Icarus, casting you as a person walking around in a space suit. You hunt down materials the usual survivor game way, though: chopping down trees and collecting precious crafting goods scattered about.

There is more of a purpose at hand when it comes to crafting and material hoarding, however. It’s not just so you can build a wooden hut to call your own. In Icarus, gameplay moves in short bursts. You have to complete contracts, in which you and your friends leave the comforts of a space station to rocket down onto a planet. The goal is to get whatever you need done, done, and then go back home. According to PC Gamer, the materials gathered can then go into crafting upgrades to landing craft, vehicles, and more.

Too close to the sun

Icarus, as a concept, certainly sounds interesting. The usual survival game pace is generally set at how quickly you can punch trees and fortify yourself from assholes. At least, that’s how it was back when I played Rust. Icarus sounds more like a survival game strung along by missions, where each day brings something new to work toward.