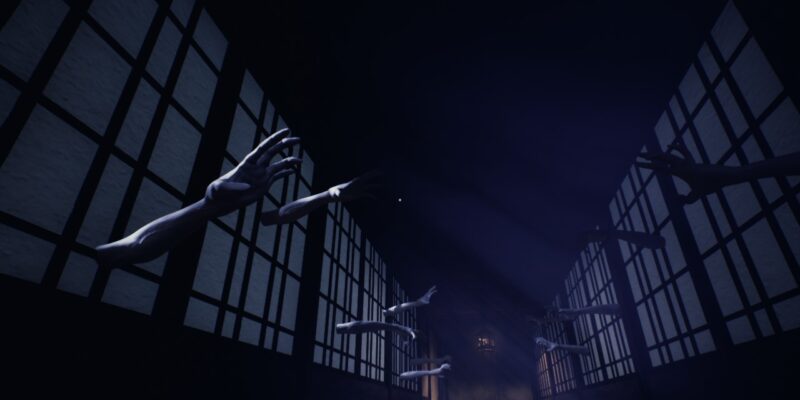 There are a great many Japanese horror games that successfully utilize the country’s rich folklore and history. Japanese companies are often behind those games, but that isn’t the case with Ikai, an upcoming horror puzzler made by an indie Spanish developer. I got to play the game’s prologue ahead of its March release and, while it gets the aesthetic and atmosphere down pat, the game seems to be set up to fall into some rather unfortunate genre traps, which makes me a bit wary of its upcoming release. The prologue was a sizable build, too, and it took me roughly 80 minutes to get through.

The story concerns a feudal Japanese shrine. The head priest has briefly left the shrine under the care of his niece, Naoko, a shrine maiden, while he goes to investigate the mysteries surrounding the summoning of a demon. The game begins with a flashback to Naoko as a child playing hide-and-seek with another kid before picking up in the present day. We do some sweeping, as well as practice calligraphy on talismans. You actually have to do a decent job of drawing kanji on the talismans in Ikai, or the game will force you to start over again. After massively altering the default drawing sensitivity, I was able to draw the kanji correctly, though.

At this point, Naoko let me know that I should go get the laundry. To be blunt, Ikai seems rather fond of the design philosophy that players should learn as they go, which is a nice way of saying it drops you into a shrine you’ve never been to and then tells you to go to a room you’ve never gone to before. Because there’s no map, I had to wander around the place until I found what seemed like a washroom. 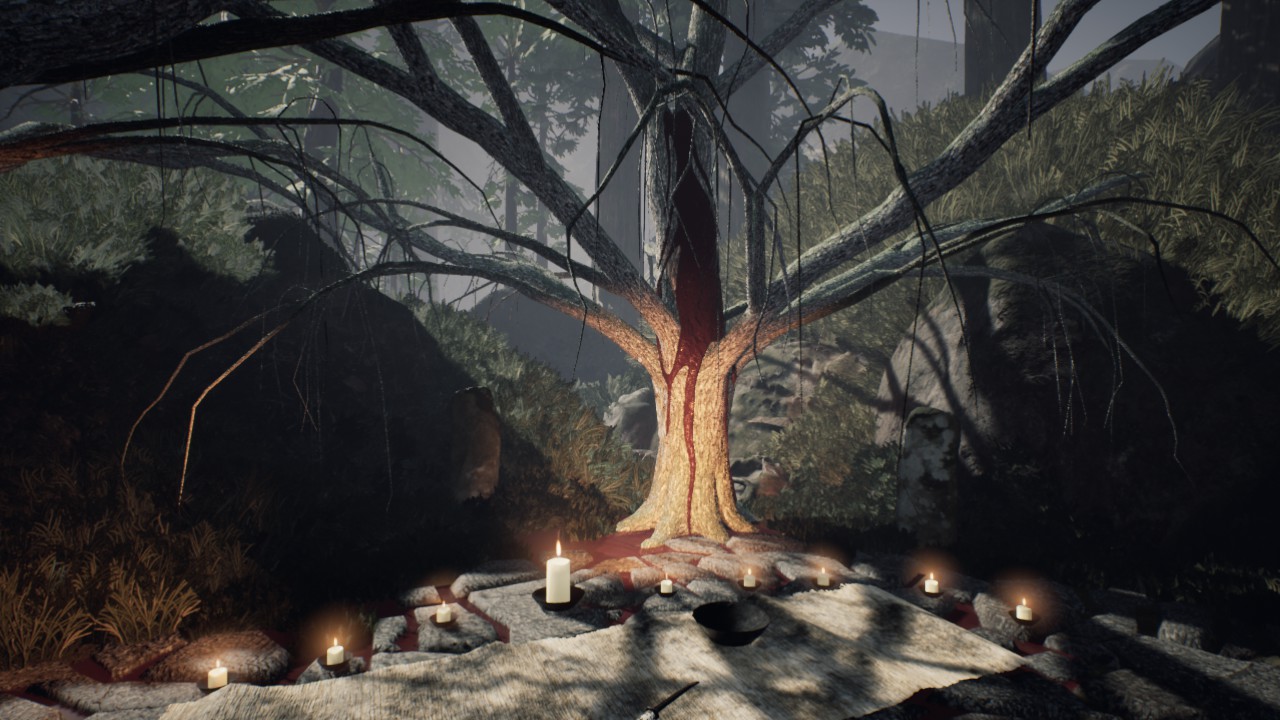 Where are you going?

Once I located the laundry, Naoko informed me that I needed to wash it in the river. I wandered some more until I found the gate leading outside the shrine. Unfortunately, the gate was locked by a surprisingly complicated puzzle that required me to move tiles in order to unbar the door. It made absolutely zero sense for someone to lock the gate with such a thing. Once open, the path to the river greeted me immediately. Ikai has a fairly high level of detail for a fully 3D indie game and it offers up a substantial amount of space.

As I walked through the area, I did feel some dread stir. There are illustrated pieces of paper to find that teach you about various kinds of Yokai, which is neat. Naoko pipes up with clues as to the way forward, but these are hinted at using language that was often unclear. They caused me to ignore her and just wander until I found something that looked right. Eventually, I came to a bleeding tree with some sort of ritual prepared around it. But Naoko said nothing and I couldn’t see anything to interact with, so I figured I was in the wrong place and kept wandering, looking for anything to interact with, as Naoko repeated the same useless hint phrases as before.

Once I realized I was getting nowhere, I returned to the ritual spot, only to realize that there was a tiny knife I could interact with. I thought I was supposed to be washing clothes by the river? After interaction with the knife, a little scene plays. Now  it’s nighttime, and masked creature starts dropping in front of me randomly. Ikai is undoubtedly creepy and I think the production values go a long way towards making it more compelling. 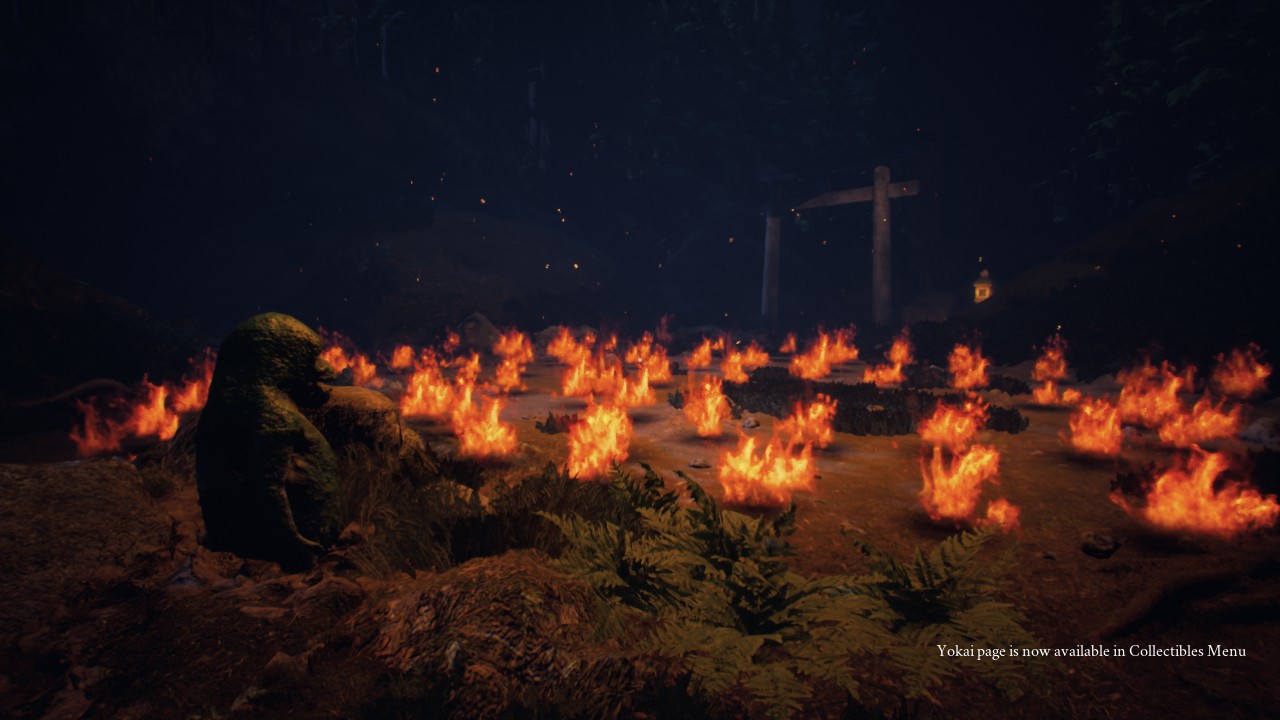 A fire in the night

After failing to have washed the clothes due to her random act of knife-touching, Naoko has to walk the entire way back to the shrine in the dark. Shortly after setting off, fires randomly appeared on the ground in front, only to blink out of existence back and forth. In this section, I moved forward, careful to avoid the flames while approaching the stone torii leading to the shrine. There were two of these, and both were heavily trial-and-error. If Naoko touches the fire, she dies immediately.

Once I got through this, I got back to the shrine. Naoko mentions that there must be a cursed item (pretty specific guess, but alright), so I then wandered around until I found the place that looked right. Naoko’s hints clued me into the fact that she needed to pray for some reason, and that a sign would help me. I found the sign, but it was in Japanese and I couldn’t read it. After randomly picking up some coins and dropping them in random places, I threw one in a box near the sign. I then rang a bell. At this point, the sign finally had a prompt to let me know that all a prayer required was to offer a coin and ring the bell. Thanks. That was super helpful.

Of course, now I once again had no idea what to do. “Something fell out of the bell,” said Naoko, because it wasn’t at all clear that something fell out of the bell. There was a key on the ground that I needed to use to find the cursed item. I never would have seen it without being told it was there, which is clearly why that bit of dialogue was included. As for finding the cursed item, that naturally meant randomly opening a bunch of drawers. Eventually, I found it and Naoko told me to make a seal for it. But that meant I needed to find the writing room again. 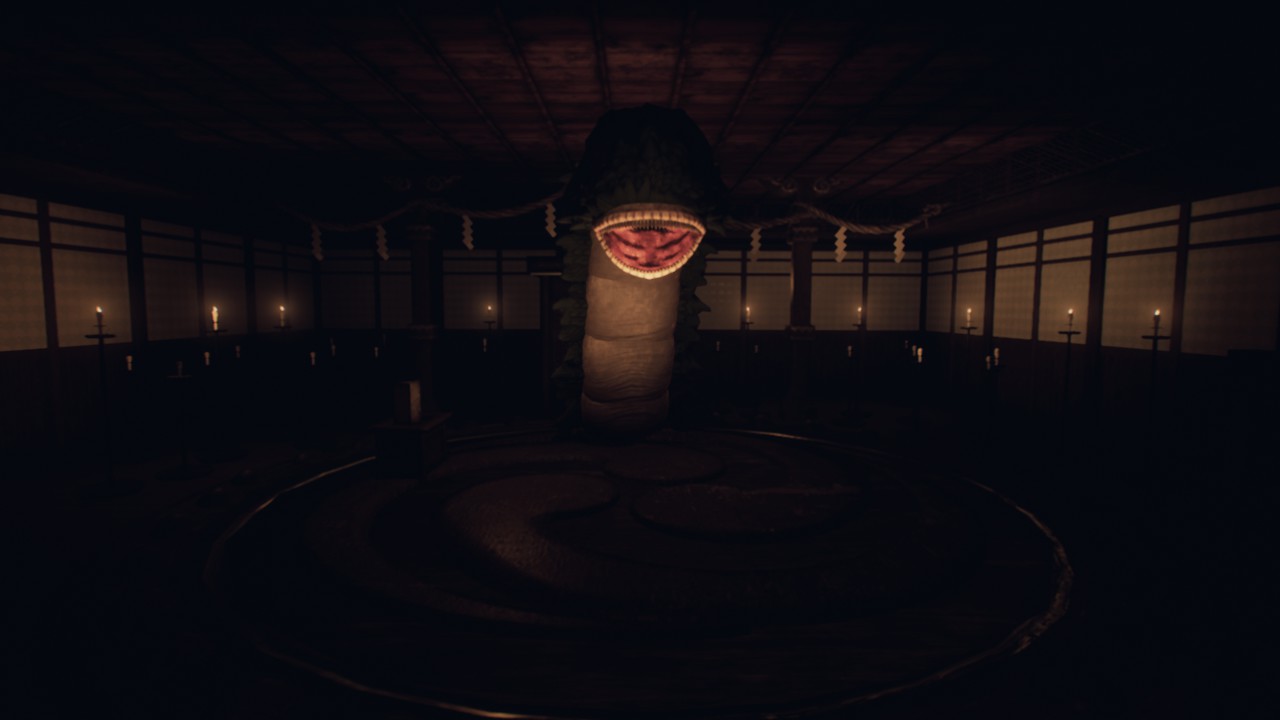 Also, there was now a monster hunting me. I’m not sure who or what it was, but it was there. Strangely, I found myself walking right up on the monster and it didn’t even realize I was there. Once I found the writing room, though, if I didn’t draw the kanji on the talisman quickly enough, the monster would kill me. I had to find a “safe spot” in another room, and the spot I picked was no safer than the table in the writing room. Once I trial-and-errored my way through this, I was able to return to the item. Only now I had to sneak while in the room! Walking upright got me killed immediately. Awesome!

I put the talisman on the mask and sealed its evil, only for Naoko to remark that she heard chanting from downstairs. This led me down a hallway with arms sticking out of the doors that needed to be crouched under. Upon entering the right room, a scene played and I then had to run from a monster. If I didn’t do the right thing quickly enough, the monster killed me. This was a problem because this section was so dark I could hardly see anything. It turns out that I had to move a stool, that I couldn’t see, in front of a ripped-open paper door. I probably died a dozen times solely because I didn’t understand what I was supposed to be doing.

Finally, I made it to a room that Naoko claimed was safe, at which point I drew up another talisman and placed in on the door. I had to then solve a puzzle that focused on meticulously examining all the items in the room for ten minutes before using the info to open a padlock and fall into a crawlspace.

That is where the prologue ended, kicking me back to the menu. I rather like first-person horror games, but I don’t tend to care much for trial-and-error gameplay or wandering around aimlessly all the time. Based on the prologue, I’m not sure that Ikai, despite having some interesting content, is quite for me. 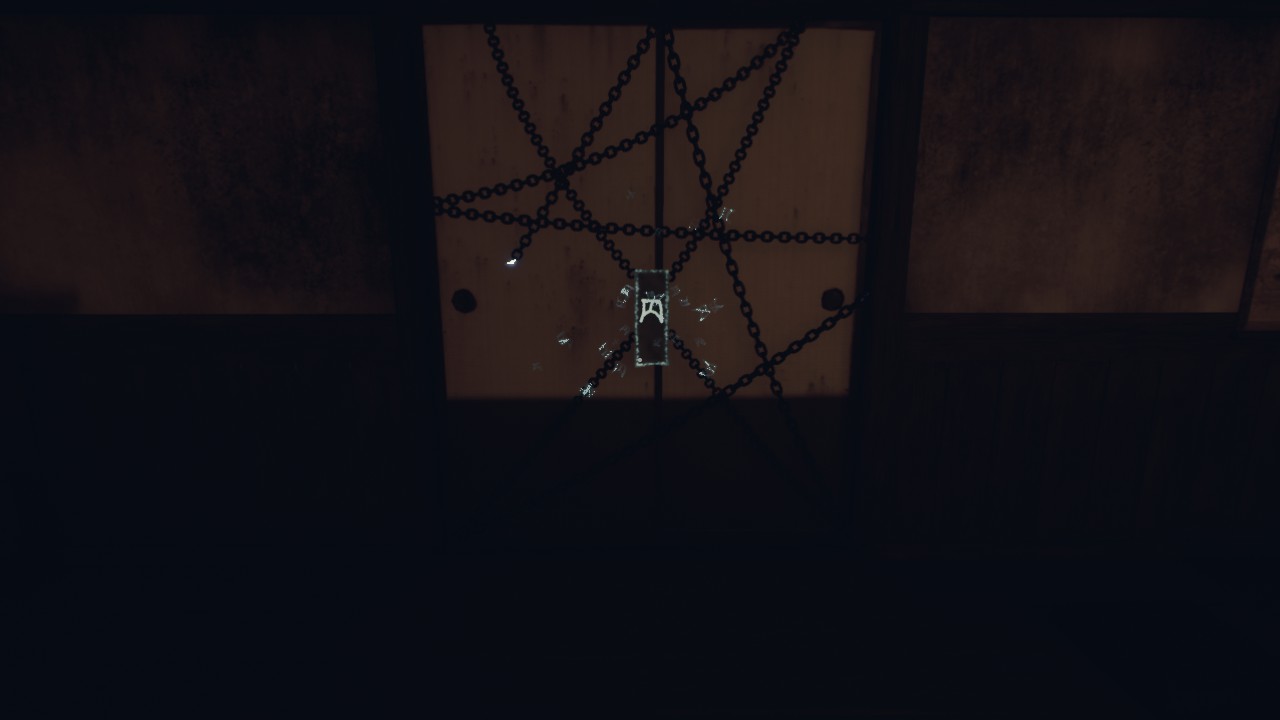