Two adaptions of Greek mythology have joined forces for a godly crossover event. The realm of Immortals Fenyx Rising has a limited-time quest based on the Netflix show, Blood of Zeus. On top of that, players can also purchase a new Blood of Zeus-themed character pack in addition to a weapons packs.

The limited-time event has already kicked off in Immortals Fenyx Rising. You have until January 28 to complete the quest titled “A tribute to family.” In the quest, you will be called on to battle two evil creatures from another world – Chimera and Cerberus.

In Greek mythology, the Chimera is an amalgamation of many dangerous creatures. Usually, it has the body of a lion and a snake as a tail. It also often has wings. Plus, it breathes fire. Good luck. As for Cerberus, it’s the multi-headed dog that guards the gates to the underworld of Hades. You would need to be immensely powerful to perform that task. Taking down both of these beasts should be a good test of your godly abilities.

While you only have until January 28 to complete the limited-time quest in Immortals Fenyx Rising, you will still be able to purchase the Blood of Zeus character and weapons packs after the crossover ends. 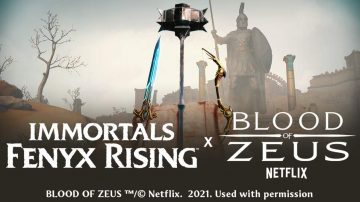 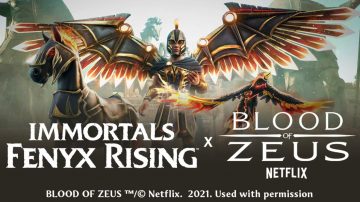 As you can see from the images above, the weapons pack will apply Blood of Zeus­-themed skins to your sword, axe, and bow. The character pack will dress you in the armor and helmet of the Amazonian warrior, Alexia – a major character from the Netflix show. Plus, it will give you a Blood of Zeus set of wings, a mount, and a phoenix companion.

The Immortals Fenyx Rising crossover with Blood of Zeus is just the thing players need to tide them over as they wait for the allegedly imminent arrival of the game’s first DLC, A New God. If you’re flailing around in the mythical world, you can check out our Immortals Fenyx Rising hub for some guidance. Likewise, if you still haven’t dived into what we consider one of the most enjoyable titles of 2020, take a look at our review of Immortals Fenyx Rising. It might convince you to follow in the footsteps of the gods. Hopefully, you’ll do a better job than they did.

By Andrew Farrell2 seconds ago
News