Dungeon Keeper was a darkly humorous game in which you played an evil, demonic overlord reigning over a dungeon and attempting to subjugate a fantasy land. You’d plan out your dungeon, construct rooms however you liked, set traps, and try to attract a variety of monsters to live and stay in your dungeon so that you could use them to wipe out invading heroes and complete your objectives. You couldn’t control most creatures directly – you could drop them onto places, slap them around, and give them vague orders, but they did what they wanted to do. They’d set up home in a Lair, they’d eat when hungry, they’d train if they felt like it. Some creature types didn’t get on and would fight, and you’d have to do your damnedest to keep this vicious horde happy (sort of like a BDSM Viva Pinata, if you’re more familiar with that game). But you were managing rather than controlling.

Impire is a “humorous” game in which you play an evil, demonic overlord reigning over a dungeon and attempting to subjugate a fantasy land. You plan out your dungeon, construct rooms of a set size, set traps, and build a variety of units so that you can use them to wipe out invading heroes and complete your objectives. You control everything directly; you can teleport things from place to place, but you you’ll mainly be ordering them around using standard RTS controls. Each creature has an aggression bar which must be kept high by getting them to eat; each creature has a level that can be improved through training or fighting heroes. But they don’t do any of this automatically – they don’t have any wants or needs or likes or dislikes. You have to direct them to do everything. Rather than managing, you’re micromanaging.

And that’s a key difference. Impire isn’t SimDungeon, or in any way a proper attempt at remaking Dungeon Keeper for the new millennium. It’s an underground RTS. The problem is it’s not a very good one.

There are two primary reasons for this. The first is the aforementioned micromanagement; as I said above, you have to order your minions to do everything. Is a minion doing no damage in combat because it hasn’t stopped by the kitchen for awhile? Well, he’ll never visit it on his own, so you’ll have to click him over to it manually. Have you just summoned a Berserker, and he’s sitting at level one? Time to order him over to the training room, because he’ll never visit it himself. Considering they can’t even feed themselves, you feel less like a demonic overseer and more like a babysitter.

The second problem is a bit of a bigger one: there isn’t really much of any interest to do. Gaming luminary Sid Meier once said that a game – a good one, at least – is “a series of interesting choices.” Impire has no interesting choices. Few of your choices appear to matter at all, in the grand scheme of things. Should this squad be filled out with a Minotaur or a Shaman? What sort of trap should you place in this corridor? Where should you plonk your Extractor? The answer to all of these: it doesn’t really matter.

It might be hard to understand how that’s actually possible in a game like this, so I’ll give you a brief blow-by-blow of how a typical level might go. 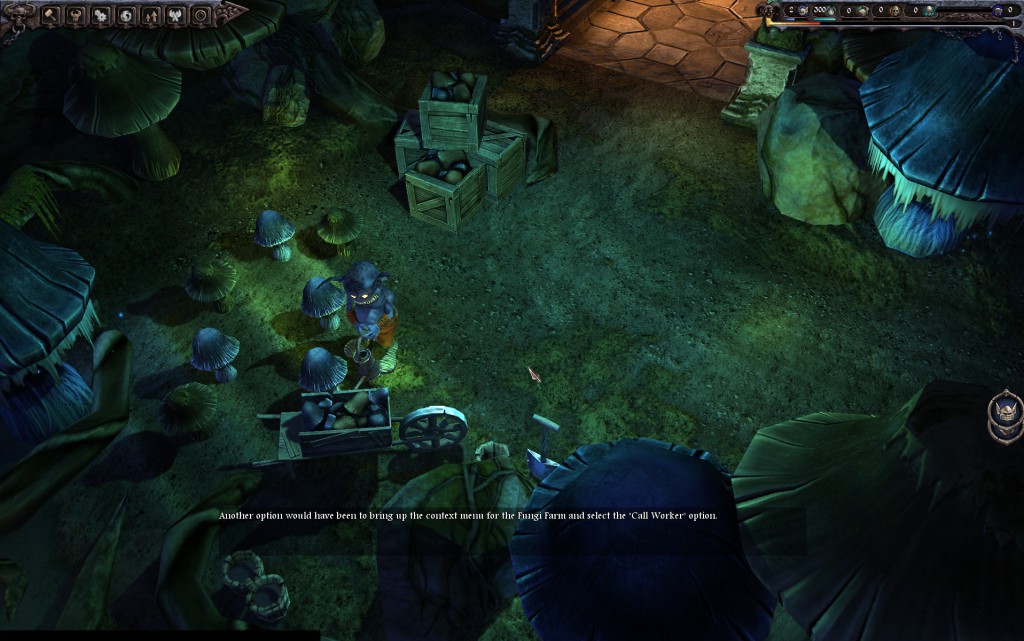 The level begins. You take a look around, summon a few more workers to help out, start repairing the mushroom room (which is your primary source of resources) and whack down a kitchen and a basic unit production room. You assemble a squad, send them out into the overworld to raid for resources, and then gradually build up your dungeon. You build new rooms, unlock a few extra squads, and level up and upgrade your troops.

Also, intersperse every other sentence in that with “and then you send all of your squads to the kitchen to restore aggression” and “and then you send your troops to the entrance of your dungeon to fight some heroes who are no threat whatsoever.”

From then on, you’ll probably deal with your main objective and any sidequests, which usually involves either sending your troops out on overworld raids (which is simply a case of picking a squad and a destination) or exploring an area outside your dungeon. And by “exploring an area outside your dungeon” I mean “drag-selecting all of your troops and right-clicking around a maze.” Sometimes there’s a boss, who may require you to attack various things around the environment to stop him, or who may simply need to be tank-rushed into submission.

Again: squads, kitchen, aggression, heroes, every other sentence. And about eight times in the middle of the “explore” sentence. And bear in mind that most missions will take an hour or two to beat. 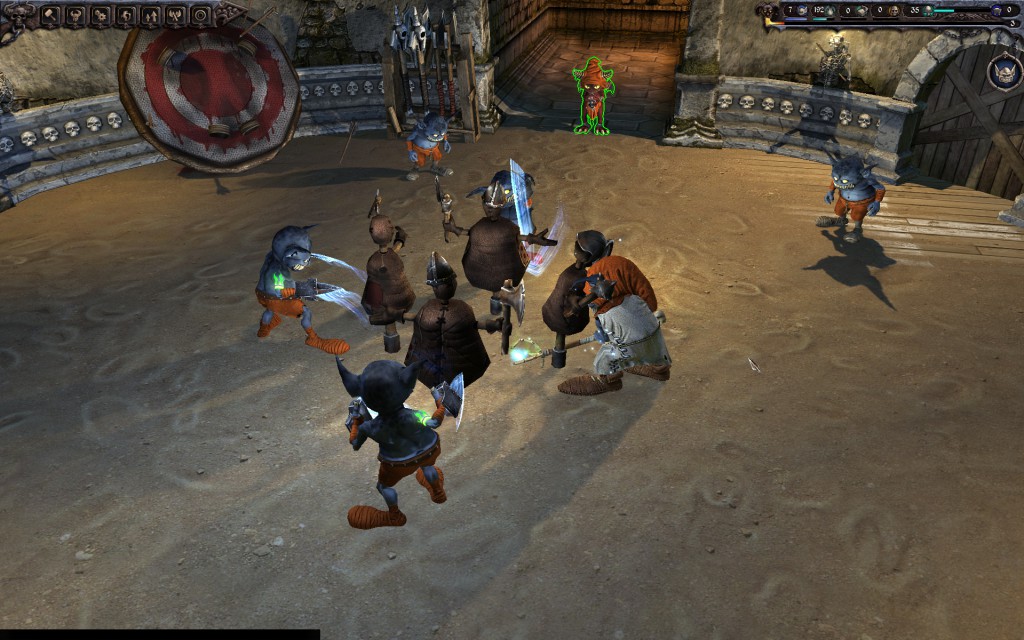 In short, you’re tank-rushing an area with as many squads as you have, and this is broken up by teleporting all of your troops back to base to feed them up and maybe fight some heroes. That’s basically the entire game. Traps aren’t really enough to topple heroes by themselves, and while you can try to forgo the constant teleporting-back-and-forth by building extra troops and setting them to patrol the dungeon patrol, solo monsters are easy fodder for most heroes and you’ll still have to send them to the bloody kitchen every few minutes.

There are some neat ideas at work. Upgrades are handled via DEC points, which you acquire for doing literally anything, and these let you pick and choose what rooms/monsters/buffs to unlock in whatever order you like. Squads, too, are a nice idea; you can plonk up to four units together into a group and, depending on the composition, they’ll get extra buffs and abilities. But neither of these really matter that much in solo play because there’s no real threat and your choices don’t feel like they’re making a real difference.

Oh, and I also mentioned that this is “humorous.” You can tell because your avatar (the demon lord Baal-Abaddon) is apparently voiced by a Gilbert Gottfried impersonator, and he likes to throw tantrums and talk about eating people. It’s vaguely amusing in an “oh, I see what they’re doing there” kind of way when he’s a two-foot tall imp; it wears thin when you’ve levelled him up enough that he’s a 15-foot tall hellbeast shrouded in flames, skulls, and black magic. Everyone else is either incompetent or weird. It’s whimsical, I suppose. It’s just not actually funny or endearing. See the screenshot below for reference.

Still, it’s worth noting that despite being a very dull game composed almost entirely of busywork, Impire is bizarrely compelling. I wasn’t enjoying it, and I don’t know if it was just out of hope that the game would improve, but despite getting fed up with the tedium and quitting after every single level, I’d find myself opening it up again a few hours later.

The tedium isn’t the only thing to contend with, though. Impire crashed a fair few times and features no autosave, so be warned about that. More amusingly (and infuriatingly) I’ve had troops apparently fall so deeply for a wall that they’ll continue walking into it and nothing – even teleporting them away – will convince them to give up their on true love. One squad got permanently stuck on the overworld map. One side-quest appeared to be categorically impossible to complete, because doing what it requested didn’t count towards completion. Troops tend to respond immediately to move orders but not to attack orders (and heroes are finicky to click on), meaning that – in the heat of battle – it’s easy to order your death squad to walk past the assorted paragons of justice hammering on them. In short: yes, there are bugs.

By Jason Rodriguez54 mins ago
Reviews