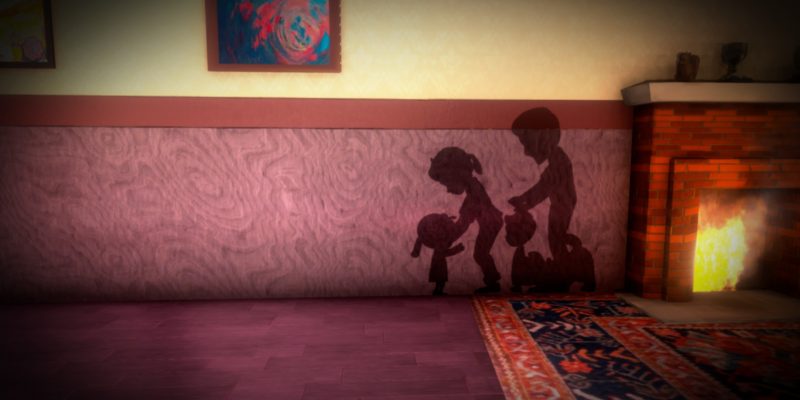 In My Shadow is the third shadow-based puzzle-platformer that I’ve reviewed in the last six months or so. They sure make a lot of these things, don’t they? I’m apparently not getting sick of them in the least, either. I didn’t have high expectations going into In My Shadow. The game’s story presentation originally had me grimacing at the artwork, but this is yet another winner with terrific, freedom-focused puzzles, coherent mechanics, and a simple, yet endearing, story. As long as you can get past the presentation, anyway.

Bella has a difficult relationship with her family. She’s not the most pleasant of people, and her regrets are weighing her down. After ignoring a text from her father, she thinks back to when she lived at home. She remembers the rooms and the warmth of her loving family. But she also remembers the mistakes she made. What I assumed to be cloying and banal at first eventually revealed itself to be more earnest than I had initially imagined. By the end, I was touched when In My Shadow‘s themes came together and the game’s final section brought everything to a satisfying end.

But In My Shadow does its best to stop you from giving it a fair shake. Its story is told through cutscenes that Bella narrates. The writing is fine, sure, but you’ll notice the character models first. To put it bluntly, they’re simply dreadful. Ugly and lacking in detail, they can make everything feel silly. I’d imagine that a lot of people might unfairly judge the game before they give it the chance it deserves. 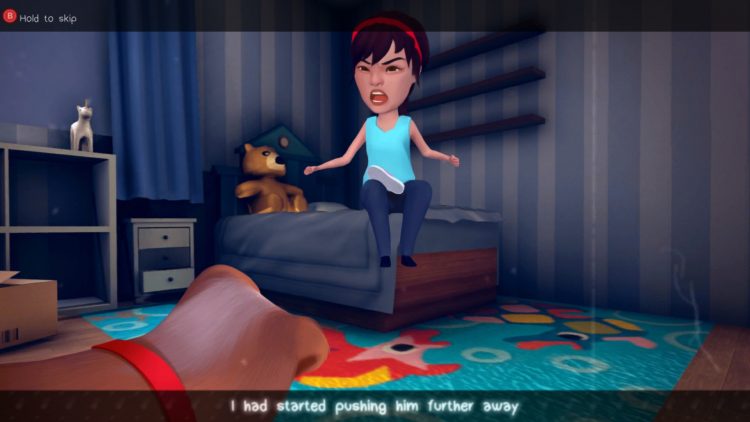 The writing’s on the wall

In My Shadow is divided into five sections. Each section has multiple puzzle levels, with all of that section’s levels taking place in a single room. The context is Bella remembering events that took place in that room, years prior. Each level’s goal is simple: you control a shadow of child Bella and guide her toward collecting all of the available pages before making contact with another shadow waiting at the opposite end. It’s much more straightforward than the aforementioned similar games I’ve covered. In My Shadow uses its lucid techniques to its benefit.

Puzzles are, as you’re almost certainly aware, based on using shadows of objects to give Bella platforms to climb and jump onto. The trick is figuring out how. While other games completely put you in control of a protagonist or two, or give you access to a light source to manipulate the environment, In My Shadow opts to use two styles of control. The more obvious of these is Bella herself. You control her platformer-style as she walks and jumps on things. She doesn’t have any other abilities — she can only walk or jump.

The other half is that you’ll directly control the objects in the room. Each level has one to four objects that you’ll move through a 3D space however you see fit. Light sources create shadows based on the position of each object, and you can change the size and shape of those shadows by moving and rotating objects.

The attribute that makes In My Shadow so much fun is how open it is. There’s often not just one rigid way to make it through a level. All you need to do is figure out one way to do it and you’ll be golden, but experimentation and making slight adjustments on the fly are key. 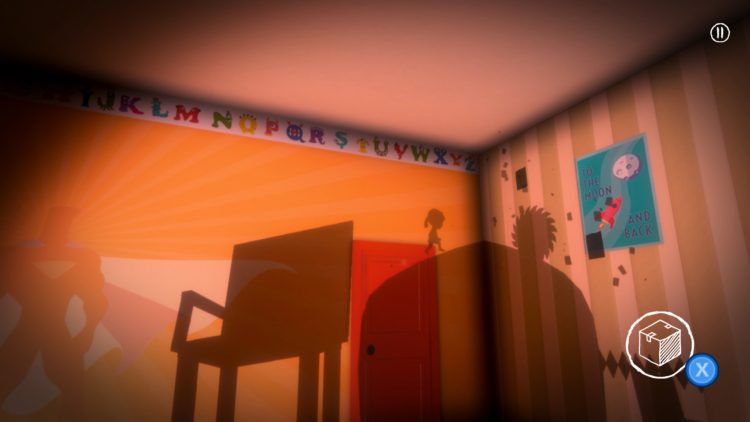 The gameplay loop of having furniture that needs to be carefully positioned is uncomplicated, but quite effective, especially when all of the wrinkles are added. At first, In My Shadow is as straightforward as it likely sounds: you drag furniture around so that Bella can reach pages. New mechanics are introduced that change the way you accomplish your goal, however. It doesn’t take long before you have to contend with spinning saw blades and spikes that force you to reset when touched.

One section introduces a second light source, meaning that each object will cast a shadow on the front and side walls simultaneously. You’ll have to carefully move the objects so they’ll be usable in two ways, and precision is often key. If something is just a tiny bit too tall, Bella can’t jump on it. If it’s not far enough to one side, she won’t be able to make a jump. You’ll also need to keep her jump height in mind, as it’s always the same. She often can’t jump at all when under a ceiling of spikes.

Things get even more complicated as In My Shadow continues to layer on mechanics. For example, objects that break as soon as you jump off them, or glass tables with only legs that only cast shadows. Some levels have objects in the area that you can’t move at all, and you’ll need to plan around them. Others have objects that can only be moved in one direction. You’ll often need to very carefully rotate things so that Bella can use them too. For instance, chairs are rotatable and have armrests and sides. 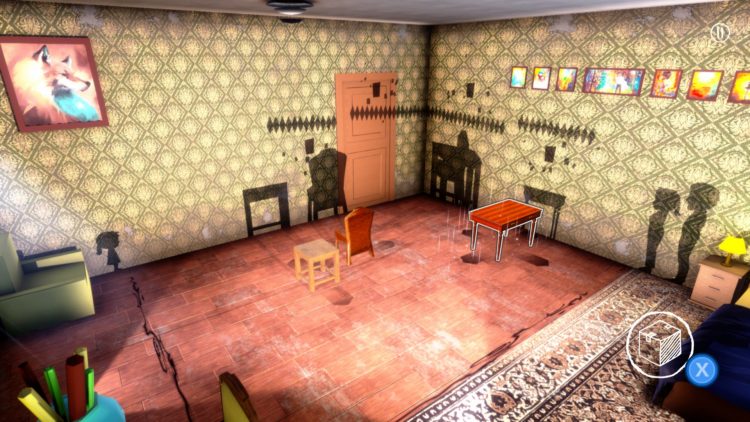 The impressive thing here is that the shadows cast by these objects are so detailed you need to consider every facet of their shape to make the best use of them. Chairs often have to be rotated in just the right way for Bella to be able to climb up them, and it feels logical and satisfying. And the levels are varied enough to keep things fresh the whole way through. The final section has you controlling two characters simultaneously, which was cool as hell. It’s a pity it didn’t last longer.

Of course, In My Shadow isn’t a lengthy experience. I beat it in about 4.5 hours, but playtime will vary from person to person. The PR rep who gave me access to the game beat it in just two hours, meaning that either I’m horrible at puzzle games, or he’s amazing at them. Regardless, I thought the game was a good length, although I wanted more just because of how enjoyable it turned out to be. The puzzle designs are quite excellent, and I felt a real sense of accomplishment after beating many of them. The game isn’t particularly hard, but I think the difficulty is right where it should be.

You might scoff when you see the story presentation of In My Shadow. But beyond that, the game is a highly enjoyable, deeply clever puzzle game with a lot of heart and a good message. It’s very easy to recommend, and I honestly kind of want to play it again, even if it’s just to mess with the shadow mechanics some more. 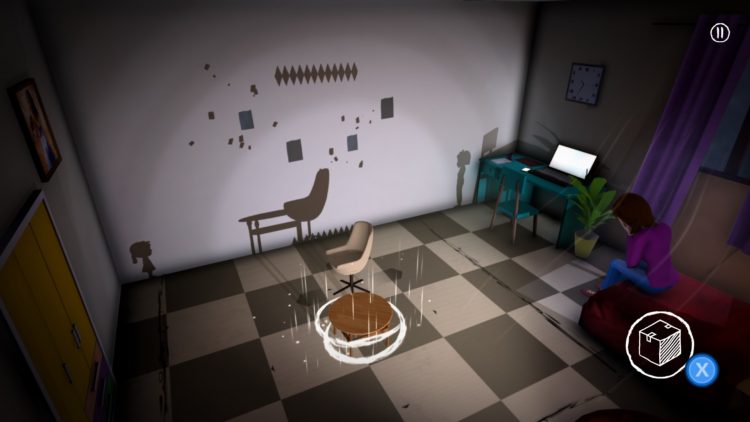 It might look unassuming, but In My Shadow is a deeply enjoyable puzzle-platforming with great shadow mechanics. The difficulty curve is just right, the puzzles themselves are varied and fun to solve, and I just like positioning armchairs for maximum verticality.