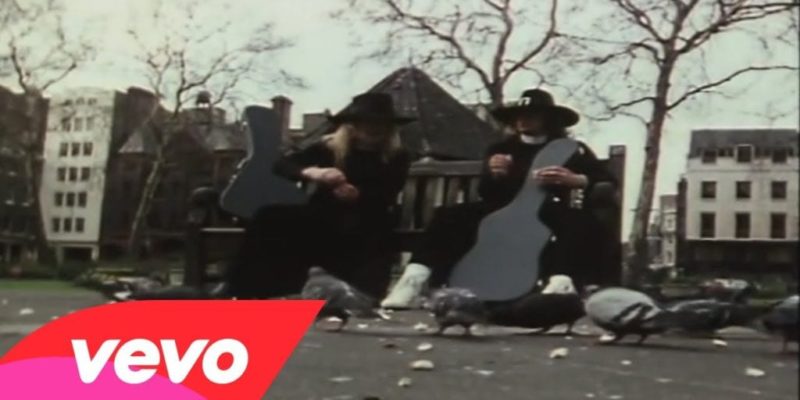 I doubt I’ll look back on 2013 with the same sense of wistful joy as I do for most of the early-90s years, but the difficulty I’ve had in picking only five games is certainly testament to this year having a lot of top-notch titles. Which is probably why I broke the rules and picked six games instead. Ahem.

We’ve got a bit of everything in here. There’s a multiplatform triple-A game (which looks better and plays better on PC), a title that could technically be described as edutainment (if learning an instrument is “education”), a couple of quirky indie titles, some free-to-play gubbins, and a platformer. No RTS games or po-faced door-breachers, though. Sorry, mass market. My much-loved games of 2013 may not be for you.

I’m going to be honest: it’s REALLY HARD to find interesting pictures of Rocksmith. I was going to put up a video of me playing something, but I’m far too shy for that, so enjoy a picture of someone else’s hand.

I started playing bass a few years ago, when my interest in Guitar Hero and Rock Band led to well-meaning family members buying me a bass guitar. The grand total of my bass education was essentially “looking up tabs for songs I know on the internet, and playing along.” While I was never overly good, I’ve got a reasonable sense of rhythm and my fingers move quickly. And hey, I enjoyed it.

The advent of Rocksmith gave me more of an opportunity to hone my skills. I suddenly had access to a greater library of songs, knowledge of how well I was doing, a degree of teaching tools, a better metric for success, songs that adjusted to my skill level, and a more compelling reason to carry on with it. Again, while I’m not going to say that I was suddenly super amazing, my skill level shot up. Then Rocksmith 2014 came out.

I can now play the bassline to Hysteria with a pretty damn high degree of accuracy.

I’m still not about to say that I’m an amazing bassist (because I’m quite frankly not) but I’m a hell of a lot better than I was before Rocksmith came out, and Rocksmith 2014 kicks the hell out of the original in pretty much every way. Session Mode is a fantastic little addition, the detection and calibration feels more precise, the tutorials are heavily expanded, the Riff Repeater and other little functions to help you with tricky bits are vastly improved. As a way to learn guitar or bass, it’s great. As a way to just play along to songs, it’s great. As a way to tool around with amp settings or jam with a computer-generated band, it’s great. It’s basically great, and I love the fact that I’m able to describe it as the best edutainment game since Carmen Sandiego hung up her hat.

I remember when she was called Windrunner, which I guess means I’ve been playing Dota 2 for at least a month.

If you didn’t see this one coming, you must be new to the site. I started playing Dota 2 back at the start of the year, when it was still in beta – probably around March or April, though it’s hard to be sure. Since then, I’ve written a whole bunch of beginner guides, started an IncGamers guild for the game, and had the game running for 854 hours. 854 hours. And I can guarantee that by the time you read this, that number will have gone up.

So why have I been playing this one game so much? Partly because it’s endlessly varied: the 100+ heroes all play in a completely different way, all break the game in their own unique fashion, and all interact with each other to create team compositions that are different every single game. Partly because there’s still so much to learn; even after 800 hours there are still heroes I’ve barely played, and the more I play, the more I realise I can improve. And partly because, at the end of the day, it’s a bunch of brightly-coloured and unique characters smashing each other in the face. For VICTORY.

I will concede that it’s daunting and difficult to get into the game. I will concede that the community is so awful it makes Call of Duty‘s look like a prayer group. But for all of this, Dota 2 is one of the most complex, beautiful, and rewarding titles of 2013 – and it’s completely and totally free.

I’m going to be paraphrasing my review a bit here, but there are really two things I can say about Monaco that might convince you of just how good I think it is. First: it’s the very first game I’ve ever awarded a 10/10 (and, I think, the only game I’ve yet awarded that score). Not something I give lightly, that.

Second: Monaco came out at the time when I got my new computer. Prior to that I was running games on something that… well, they weren’t so much running as proceeding at a slow jog, or possibly ambling casually along. My new computer can run pretty much everything at the most ridiculous settings I can choose. And yet, despite being able to whack up the graphics on Far Cry 3 and Sleeping Dogs and Hitman: Absolution and everything else that’s famously hardware hungry, I spent most of my time playing a low-fi, top-down, 2D game that would probably fly along on my mother’s netbook.

Pretty much everything in Monaco is pitch-perfect. In multiplayer it’s either a chaotic competitive scramble to steal more loot than your friends, or a carefully coordinated and perfectly orchestrated heist that raises no alarms and leaves the building cleaned out… or an attempt at the latter that turns into the former. In single-player, you’ll have to use four characters at the right times to get through the levels that challenge you.

But however you play, it’s a top-down stealth game that owes as much to Pac-Man as it does to Splinter Cell, with you barrelling down corridors away from guards, using your special abilities to distract them or create escape routes, and timing your movements to slip unseen through nets of cameras and laser tripwires. It looks and sounds utterly sumptuous. It confidently alternates between being tense and being madcap. It’s brutal and welcoming. It offers as much of a challenge as you want, and with the recent updates and the map editor, it now offers a challenge that never really ends. Monaco is a thing of beauty, and a triumph of sheer polished design. 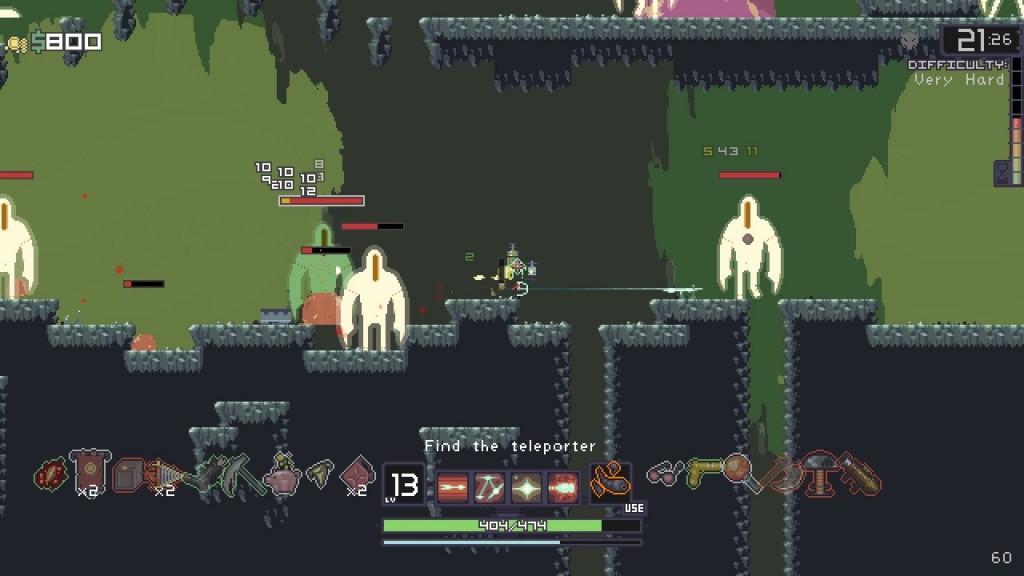 It can get a bit busy, and this is still reasonably early. I mean, the difficulty’s only Very Hard, here. It goes right the way up to “HAHAHAHA”, which – as far as I’m concerned – is proof that certain games get off on murdering you.

My obligatory oddball choice of this year is a game that I picked up entirely on a whim. We didn’t review it. Barring a brief mention on a podcast, I don’t think we ever even discussed it. This makes me sad.

Risk of Rain can most easily be described as side-on The Binding of Isaac, with multiplayer. You’ve crash-landed on an extremely hostile planet, and you have to find your way back to the ship and escape. On the plus side, your ship was a delivery ship, and all the cargo it was carrying – ranging from children’s toys to portable rocket launchers – are scattered around the planet for you to find and use. On the downside, the planet gets nastier as time passes by.

That’s the chief mechanic with this randomly generated piece of joy. The longer you wander around, the more time you have to find items, level up, and become more powerful… but the longer you wander around, the higher the difficulty gets. This results in an utterly unique balancing act: you have to weigh up the risk of heading straight to the next level while things are still easy, against scouring the level you’re on for items that’ll improve your chances.

Randomly generated levels, plenty of monsters, completely randomised items, a huge amount of unlockables, and ten classes (all of which play very differently, from a laser sword-wielding mercenary through to a slow-but-powerful sniper) mean that there’s a huge amount of replayability, which is something I always love to see.

A had a friend who used to complain that Tomb Raider was unrealistic. Not because of the monsters or apocalyptic plots or supernatural gubbins, but because Lara’s hair remained perfect and she never got scuffed up. I’d like to believe that New Tomb Raider is basically a specific, targeted response to her.

I’m pretty sure I already wrote a fair bit about this when you lot sensibly picked it as one of your favourite games of the year, so I’m not going to go on about it too much.

This is the first Tomb Raider game I’ve really enjoyed for a long time, and indeed, that’s probably because it’s not that much like the other Tomb Raider games. For starters, it actually has decent combat. For another thing – while not open-world – it actually has a degree of freedom of movement and exploration involved in its rather large areas. It’s got plenty of fun traversal tools that allow backtracking to previously unexplored areas, it’s got solid voice acting and a decent Indiana Jones-ish plot, and it’s got some excellent writing. It’s never flawless, but its flaws are pretty inconsequential next to the sheer enjoyment the game kicks out. It’s an excellent starting point for a new series of Lara adventures.

I’m pretty sure I was only meant to talk about five games, but shh. If Peter and Paul aren’t watching too closely, they might miss this one. If they spot it, they might let me off because the Tomb Raider one is so short. Guess I’d better be quick either way.

There were lots of fantastic games this year; there were certainly a lot more than five I want to rant and rave about. I’m going to resist the urge to just list everything else I liked, and instead, I’m just going to say that the one game I absolutely cannot go without mentioning is Rayman Legends.

Rayman Origins was one of the best side-on platformers of the past decade. Its sequel, Rayman Legends, is better. Perfect controls, exquisite level design, a quirky sense of design and humour… oh, look. If you’ve ever enjoyed a platform game, whether Mario or Sonic or whatever, then look into buying Rayman Legends as soon as you can. It really is that good.