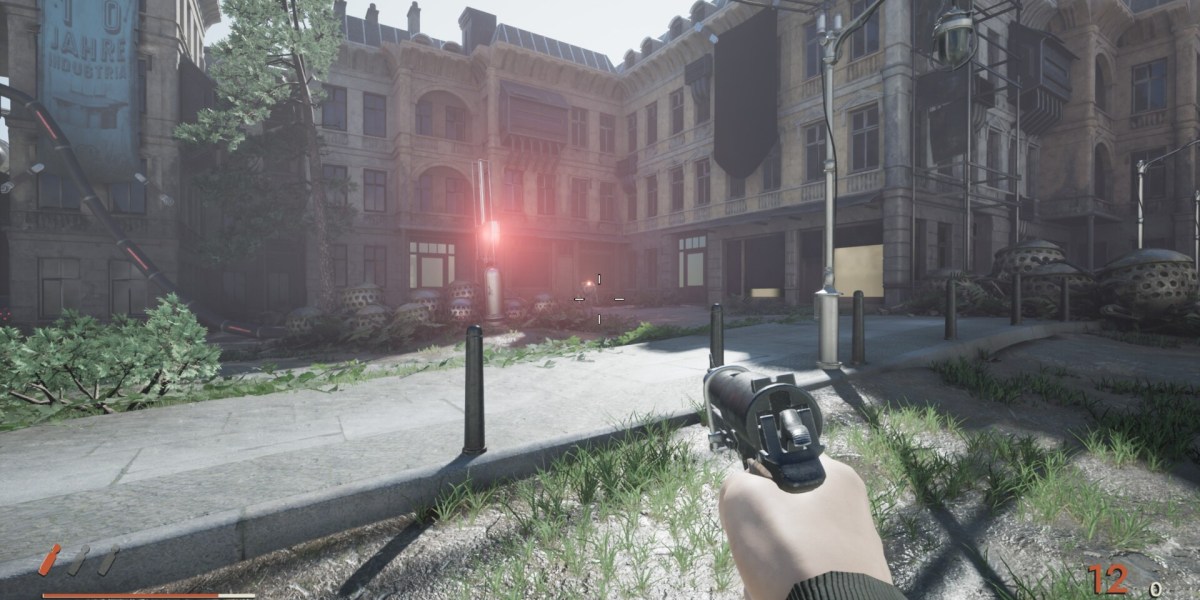 Robots sure have a lot of uprisings in fiction, don’t they? Industria is the latest game to have players get near automatons. This time, it’s a short-ish first-person shooter with a strong focus on story, along with some puzzle elements. Well, at the beginning anyway. Although it was mainly put together by a couple of people, it’s actually really solid. It lacks polish and ends on a pretty jarring cliffhanger, but I had a good time fighting my way through robots in this game. Where else can you hit bots with a pickax?

Industria drops you into the shoes of Nora, a woman in the mid-20th century who gets a surprising phone call from her boyfriend, Walter. There’s an AI hivemind called ATLAS and something weird is going on, so Nora heads to the company building to track Walter down and get to the bottom of this. Upon retracing their steps, she ends up getting sucked into some sort of temporal anomaly before waking up in a library. After finding the exit, she wakes up years in the future where ATLAS has destroyed the country. No humans remain, save for one, and robots patrol the streets.

The story is okay, albeit derivative. It also takes all of its twists and turns from the BioShock playbook. Industria takes about four hours to finish, but only has five enemy types for you to face, so it doesn’t wear out its welcome. You can choose to play it on normal or hardcore modes. Hardcore is, obviously, more difficult and provides less ammo, with manual saves only. I had at least one manual save become unusable, so I don’t recommend playing hardcore right now. Unless it’s melodic hardcore, because who doesn’t love the oozin’ ahs? That’s a punk rock joke. Thank you. 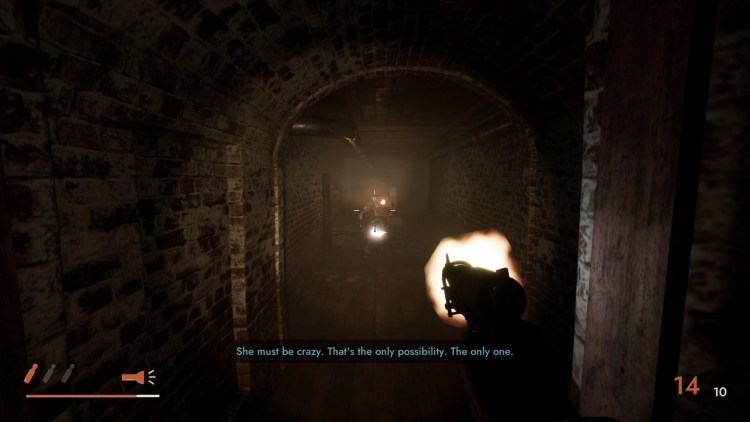 No thank you, Mr. Robotto

Early on, Industria has survival horror vibes. Your initial weapon is a pickax that has a default and charged swing. The charged swing is more than enough to comfortably take out the game’s most common enemy type, so I liked using that. They also start running away when they’re severely damaged, so you can run after them and hit them in the back with the pickax. Good times. The early part of the game focuses on puzzles since you don’t have guns yet. Well, they’re not complicated enough to actually be called puzzles, so I guess I’ll just call it “adventure game shit.”

Once you get a gun, though, you pretty much never have to do any more adventure game shit. At one point you do have to disconnect two devices to move forward, but other than that, this is a purely linear, story-focused shoot ’em up. Nora gets a pistol, submachine gun, bolt action rifle, and shotgun. All of these have a fairly limited ammo capacity, save for the shotgun, which lets you carry over 100 shells. Huh. Weird. The shooting is fairly enjoyable and the enemies are variable, so combat works as a hook here.

The default enemy is purely melee-based and just swings at you. Then there’s a little bot that chases after you and then explodes. Another type shoots you with machine guns, while another melee type hits you with a stun baton. There’s also a dog robot that shows up in a single section of the game. In the aforementioned bugged manual save, loading this level would see me load into an area with a whole load of the dog enemies and no way to escape. Hopefully, that’ll get fixed. Although, normal mode has autosaves, so it wasn’t that big of a deal. 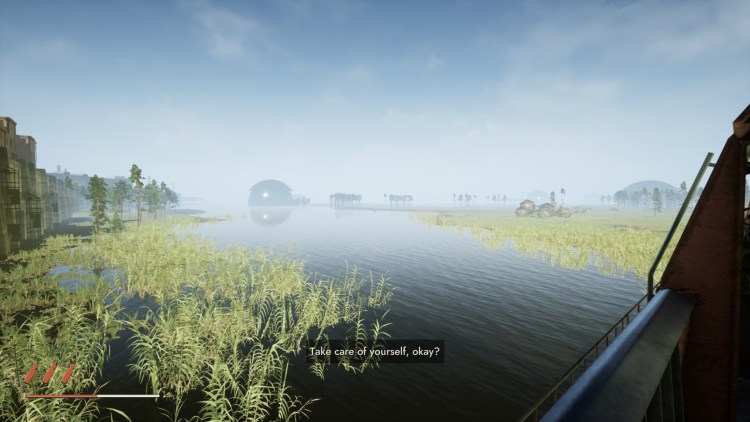 The world of tomorrow

I was fairly impressed by Industria‘s visuals. It’s far from an amazing game visually, but it’s pretty good for mostly being made by two people. The level design is clear, the areas are believable, and the assets work fine. Performance, on the other hand, isn’t great. I would sometimes get 30 fps, but it mostly hovered around 60 with occasional dips to 40, on a 5700 XT. Performance got a lot spottier at the end of the game, though. For whatever reason, the framerate would drop to the single digits every 20 seconds or so. At least this happened when the game was pretty much over.

Alongside this issue was the fact that every loading screen would result in the game freezing for minutes at a time. I thought my saves were bugged, but no, the loading just started taking a super long time. I’m not sure why this was, as Industria had neither of these problems during the vast majority of my playthrough. The only other bug I can think to mention is that a locked door at one point had no collision detection. Touching it allowed me to go straight through it and I got to see the graphics from behind buildings. I had to reload here, as I couldn’t go back to normal once I triggered this.

On normal, there was plenty of ammo to take most things down and there were plenty of healing items. Nora can carry three vials of health drinks, and these heal half of her health bar. I didn’t see anything in the way of collectibles or anything, so don’t expect to hunt the levels for secrets. Industria‘s ending wraps up very little, so don’t expect to walk away feeling fulfilled either. Granted, this is meant to be one of those David Lynch-inspired stories, so I didn’t mind the ambiguity. 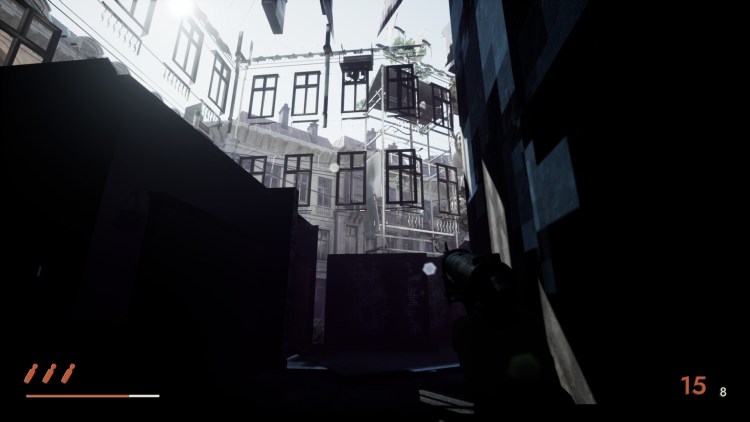 Industria is a perfectly enjoyable way to spend four hours, especially if you’re into killer robot stories. Some aspects of the art design are rather unique and scrounging for supplies while blasting robots makes for a fairly compelling adventure that I wanted to see through to the end. It should hopefully receive a fair amount of extra polish as further bug reports roll in from players in the next several days, as there was even a patch shortly after launch that aimed to improve performance. It may not have worked, mind you, but they’re trying!

Industria lacks polish and isn't very long, but it's a well-made, interesting first-person shooter created with some clear talent.