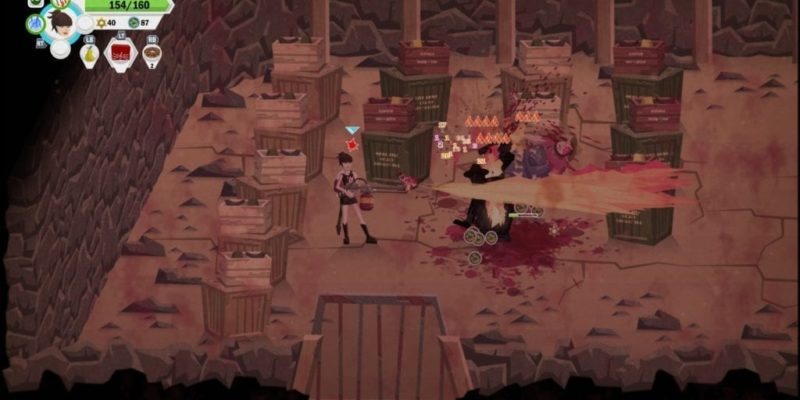 It doesn’t take a lot to make a game fun. Sometimes they need complex systems, plots, and moral choices. Other times it’s more than enough to hit a zombie in the face with a guitar and then call down lightning to fry them. Infected Shelter is an extremely familiar game, but a very fun one, even in its very early state.

Infected Shelter is another roguelite beat-em-up. If you’ve played games such as Rampage Knights then you’ll be immediately familiar with how the game works. It’s hitting Early Access today and as such only two characters were available to me – a woman with a guitar and, bizarrely, a woman pushing her elderly grandfather in a wheelchair. The setting is a typical post-apocalyptic zombie one, in which you have to cut swaths through both the undead and members of the government trying to snuff you out.

Get A Move On

As you’d imagine, you can move up, down, left, and right through each screen. Your characters come with both light and heavy attacks. The woman with the guitar, for instance, punches for her light attack and swings her guitar for her heavy. Characters also can also equip up to four special attacks at once. These include the aforementioned lightning attack, plus others such as calling drones or summoning a few skeleton warriors to fight alongside you. These have cooldowns that generally range from 90 seconds to two minutes and can definitely make a huge difference. Your character can also block by pressing and holding a button and will dodge out of the way if that button is pressed while moving. 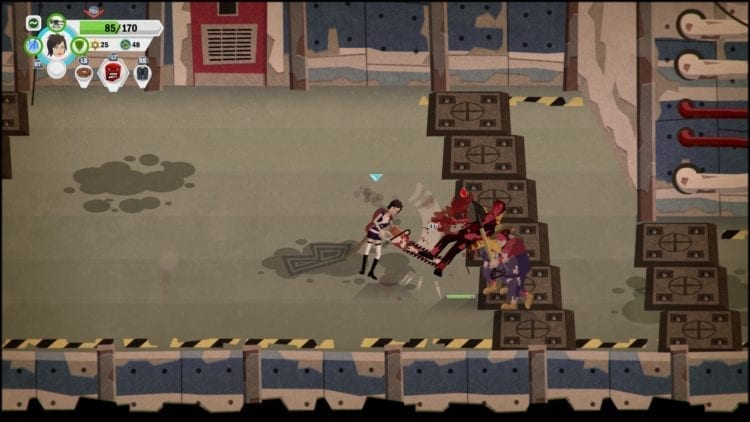 Like I said, Infected Shelter is also a roguelite. You get one life and, when you die, you go back to the beginning. Not only are areas and the enemies that populate them picked randomly, but your character is too. At the character selection screen, each available choice comes with three randomly-created versions with different names, clothing, hairstyles, and even some equipment. This definitely keeps things fresh. The woman with the guitar, for instance, can have an acoustic guitar or can be a goth with a flying-v. They also get different traits that really give a good incentive to carefully look at the differences between each iteration.

The combat feels decent and pretty typical for a beat-em-up. It’s a bit less smooth than I’d like, but it plays similarly to most other games of this type. What I really liked in Infected Shelter versus similar games is the frequency with which blueprints and equipment are dropped. Any blueprints you pick up get permanently added to your blueprint collection. Once in there, you can use experience points obtained from defeating enemies to unlock them. They range from unlocking new weapons that can spawn in your runs to passive character upgrades, such as increasing your damage against certain enemy types or reducing poison damage. And you keep experience when you die, so you’ll constantly be unlocking blueprints, which I really enjoyed.

There are also a whole lot of items and power-ups dropped — seemingly a lot more than in other games of this sort I’ve played. Enemies constantly drop new melee weapons and guns. They break fairly quickly, but you get new ones so often that this isn’t a problem. This adds a lot of variety which greatly increased my enjoyment. There are also plenty of power-ups and items that can give you plenty of benefits, such as giving you helper creatures and increasing your damage on that run. The items have the usual assortment of healing and buff effects and the game is not stingy at all with them, which is nice. Enemies also drop a currency that you lose upon death, which can be used to purchase items from stores during the run. 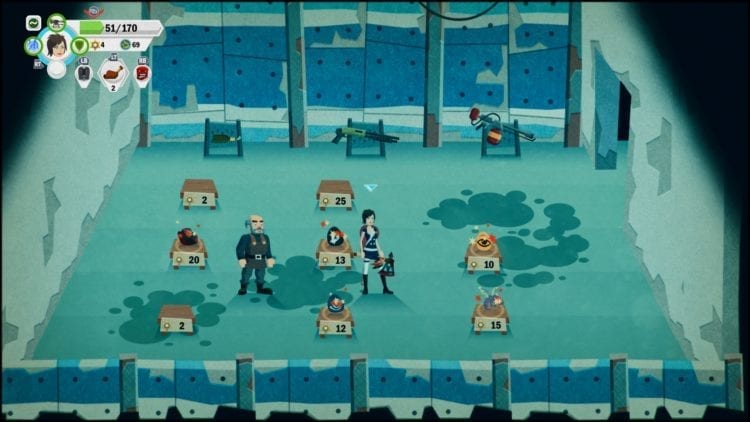 Naturally, there are boss battles in Infected Shelter as well. These are surprisingly lengthy and involved, as bosses have multiple health bars and can call in support. The first time I took down a boss’ first health bar, it stopped moving, so I assumed it was dead… only to be surprised when it got back up and promptly stomped me into the dirt. These fights can be really challenging and really kept me on my toes. They’re also a great time to unleash your special abilities.

One thing I really don’t like about Infected Shelter, though, is how quickly you can die. The characters can take damage so insanely quickly that I felt like I died randomly without knowing what was happening. For instance, one boss battle was against a large beast that called down fire projectiles from the sky. One of them hit me and I went from full health to practically nothing in the blink of an eye. This also happens when facing normal enemies. You’ll be at full health, only to get hit with a status effect that steamrolls your life bar, leading to a quick death. This isn’t exactly rare for roguelites, but it definitely felt way too fast to me and I’d like to see this damage get lowered so that cheap deaths are reduced.

The game also has co-op, but so far it appears to be local only. I’m hopeful online will be added, as this game seems like it’d be even better with a friend or two. I’m not positive on this, but it also appears that players can revive each other in co-op, which will definitely be a great incentive to have company. 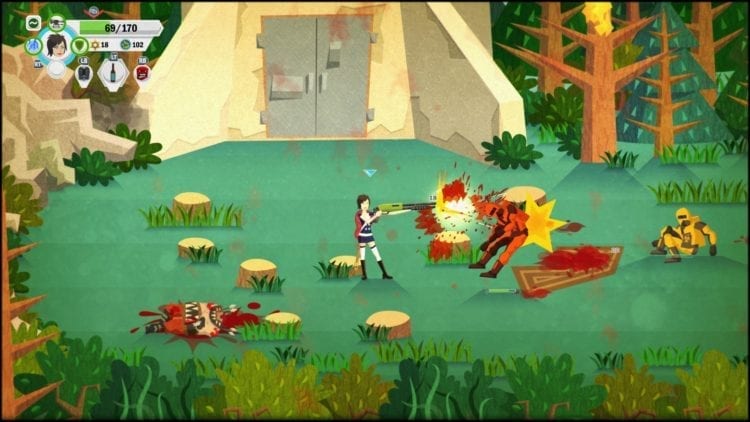 Visually, the game is fine. The character and area designs are all really standard and aren’t exactly crawling with detail, but it’s serviceable enough. It has that “looks like a flash game” charm that I see a lot in this subgenre. I think it’d probably be a good idea to try and inject some more unique character into the visuals, though, as its aesthetics won’t really help it stand out in the crowd. It gets the job done, though, and I didn’t notice anything unsightly or any bugs.

Overall, Infected Shelter is in great shape, especially considering it’s launching in Early Access today. It has fairly fun gameplay and the roguelite elements are all very well-integrated and serve to enhance the game’s loop while making it feel different enough to warrant interest from those already well-versed in the subgenre. I’m looking forward to seeing how the game shapes up, as it’s an enjoyable beat-em-up that will almost certainly be fun with friends.