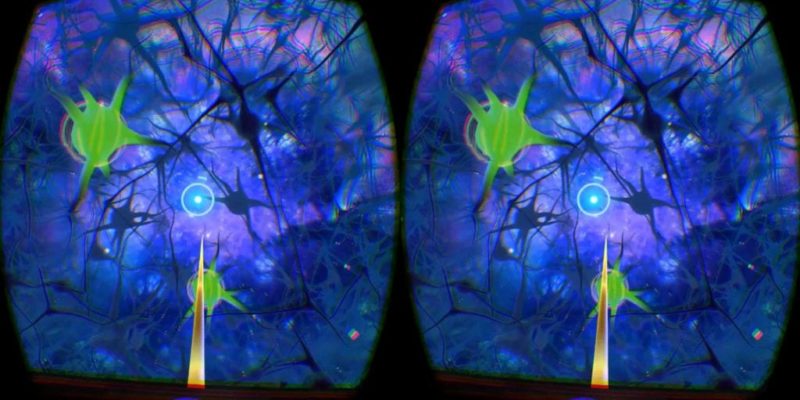 InMind VR invites you to become miniaturised and enter the brain so we couldn’t resist testing it.

This small tech demo, which has just been released on Steam, takes the player into the brain to attack evil nasty red neurons. Think of it like being in the movie Inner Space as you dash around an on-rails path inside the human mind. The objective is simple, use your head to lock onto red neuron targets and your small ship will shoot at the red targets once you’ve locked on which then eliminates those nasty neurons.

“Virtual reality opens new exciting opportunities for the gaming industry,” said Sergey Orlovskiy, CEO and founder of Nival. “We have long-term history as a developer and believe that games can be much more than just entertainment. As well as education can also mean fun. Our aim is to combine both education and enntertainment. Previous attempts of gamification were not convincing enough. We invested our experience as a game developer and our funds in the new concept. InMind is the first step in this direction. We have already shown our results to the members of the academic community and are excited to share our vision with the wide audience.”

I’ve had a quick play of the demo this morning on a DK2 and it looks fantastic, a very weird experience and works incredibly well. Using the head to track the targets sounds simple but by the time you get to level 2 it becomes increasingly difficult as you frantically look around the brain to spot the targets.

As a game, InMind VR shows some great potential and it would be fantastic to traverse the whole human body eradicating any nasty stuff.

The demo is available for free now on Steam and you can watch below as I make my way through the brain.