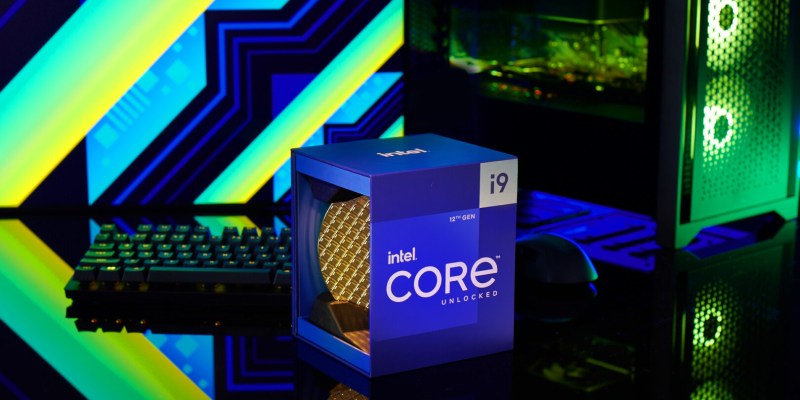 The next generation of Intel processors are coming, as the 12th generation Intel Alder Lake CPUs have officially been announced. Releasing on November 4, there are six different unlocked SKUs, all utilizing the Intel Z690 Chipset. The CPUs are built on the new Intel 7 process, which sits at 10 nm compared to 14 nm chips of the past. Intel also introduced the new larger LGA 1700 socket to replace the LGA 1200 that was utilized by Comet Lake and Rocket Lake CPUs.

The new lineup of processors were developed by Intel to be more powerful and more efficient for both gamers and creators alike. Features being touted to achieve this include up to 16 lanes of PCIe 5.0 at 32 GT/s and up to 4 lanes of PCIe 4.0 at 16 GT/s. Memory wise, they offer support for as high as DDR5 4800 MT/s or DDR4 4800 MT/s RAM. Larger L3 and L2 cache sizes also make for faster overall processing times.

With the P-cores (performance) and E-cores (efficient) of the CPUs, Intel is making a large architectural shift with the introduction of a new hybrid architecture. This architecture combines the two microarchitectures from Intel on to a single processor die. The P-cores are made to enhance both gaming and productivity in the foreground, while the E-cores help minimize any hang ups by background tasks. With the performance hybrid model, Intel is able to deliver up to a 50% boost at just 241W on the high-end processor.

Note: all prices are listed in USD.

Gamers get a boost

With the Intel Alder Lake CPU, the company states that it is “World’s Best Gaming Processor.” With claims like that, Intel better be able to back it up. According to Intel, it will. 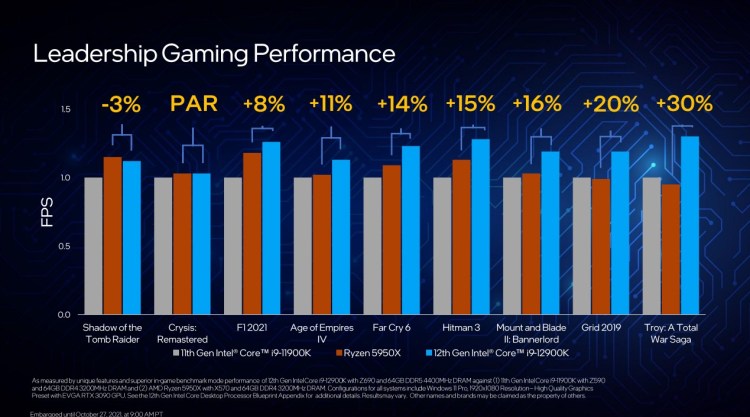 Intel claims its new Alder Lake CPU is the best processor for gamers.

When looking at various editing software, Intel claims that the i9-12900K performs up to 32% better* than the last-gen i9-11900K. Benchmarks in programs like Adobe After Effects show a 100% increase gen-over-gen, according to Intel. When running both Adobe Lightroom and Premiere, Intel claims a 29% overall boost. If exporting a Premiere video in the background while working on images in Lightroom, the jump is even more impressive with a claimed 47% increase.

For those that like to capture their gameplay, Intel used Mount & Blade II: Bannerlord to show how the i9-12900K increases framerate performance. Despite not giving specific numbers, Intel stated an 84% increase in framerate in a gen-over-gen comparison. 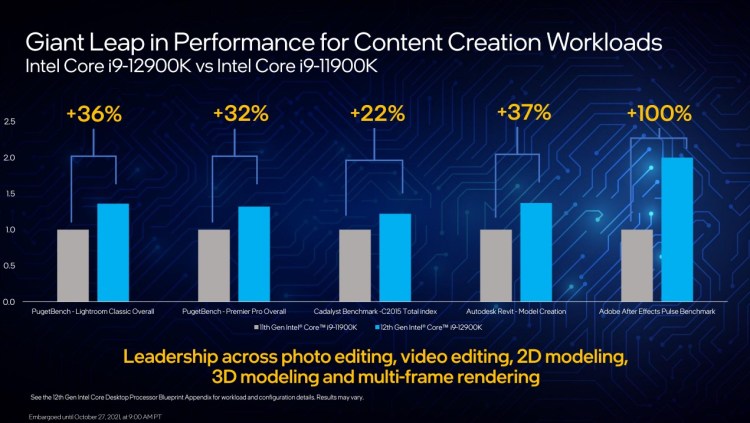 Intel wants to be the CPU that content creators turn to moving forward with Alder Lake.

With overclocking becoming more and more mainstream, Intel is introducing XMP 3.0 alongside the 12th generation Alder Lake processors. XMP 3.0 offers more profile options, flexibility such as naming your profiles, DIMM voltage adjustments, and more. What’s more is that you are able to address these profiles — if using supported RAM — in programs such as Corsair’s iCue software. Lastly, XMP 3.0 allocates a total of 384 bytes, up from the 102 allocated with XMP 2.0.

To help those without the desire to customize and fine tune their hardware, the Intel Speed Optimizer (ISO) will also provide a benefit. Designed to make overclocking easier, ISO offers one-click overclocking that will adjust both the P-core and E-core frequencies and voltage automatically.

With Alder Lake CPUs set to release on the market on November 4, it’s clear that Intel is committed to recapturing the market share it had started losing to AMD. The only question is: will the improvements be enough to make a difference?

*All of the boost numbers were provided by Intel during a media press briefing. PC Invasion’s benchmark numbers may vary when reviewing the CPU.

Inscryption Act 3 guide: Where to find the Trader and Holo Pelts