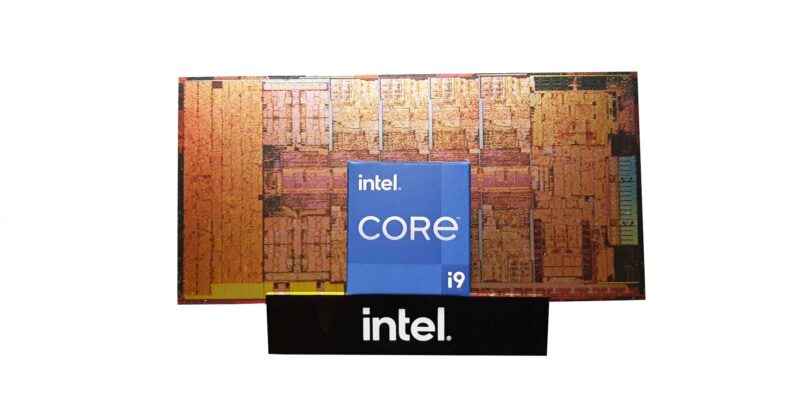 Those interested in buying the 12900K are undoubtedly looking for the best gaming performance. Intel’s latest generation maxes out at eight P-cores, but the i9 adds an additional eight E-cores to free up performance for gaming. In addition to the hybrid core design, Intel 12th generation processors are built on the new 10nm (Intel 7) node which improves efficiency enough to allow for consistent boost clock speeds above 5.0 GHz.

The benchmark results show a clear improvement in framerates, and we particularly noted better 1% and 0.1% lows compared to our previous 11700K testing. We bring this up because the 11th generation processors featured the same Golden Cove cores, but were built on the less efficient 14nm  process node. While in previous testing we had an RTX 3070, we were limited to an overclocked 3060 Ti for this review. Despite this, the 12900K, when paired with DDR5-4800 DRAM, managed to achieve similar or better performance in some of our benchmark tests with the weaker GPU.

We’re still in the process of building out a proper comparison suite against other CPUs, so our data is limited in this review. For now, we’ve included the following benchmarks with average framerates, 1% low averages. and 0.1% low averages to show how the 12900K performs in popular games. We’ve also included benchmarks while multi-tasking, test conditions for each game, and our concluding thoughts on the gaming performance of the 12900K.

Here’s a look at the gaming performance of the 12900K across various popular titles. 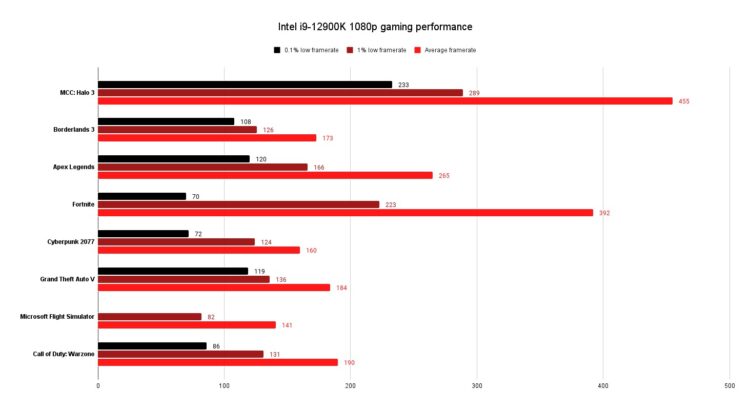 The immediate takeaway about this CPU is that pure gaming is a breeze. The RTX 3060 Ti was the bottleneck in every scenario, which should come as no surprise. However, we still managed to achieve some impressive framerates that show how easily the 12900K can pump out big numbers.

The interesting bit is that we never came close to full utilization of the P-cores while testing. In fact, Cyberpunk 2077 significantly broke away from the rest of pack in terms of CPU usage to reach 67% maximum usage on just a few of the cores. This shows the 12900K has excellent potential for those who want to buy a CPU that can keep up with new games for years to come. What’s more, ultra high-refresh experiences will also more than likely be possible in those new games too.

If 240 fps is your minimum target framerate, this CPU is clearly capable of doing so in any of today’s games with the right GPU to match. If you’re into lightweight esports titles, 360 fps is in reach as well. It will clearly take a couple more generations of new graphics cards before this CPU becomes a bottleneck in gaming. Longer, if you start turning up 3D settings instead of reaching for higher framerates.

We also noted that the 0.1% and 1% lows were significantly improved over previous generations of Intel CPUs. We believe this is due to a combination of the general improvements this generation, but also largely thanks to the E-cores that are able to handle various backgrounds tasks to keep the P-cores freed up for gaming. However, we can’t confirm how exactly this works until we do more testing on how the Thread Director manages other applications like the OS, gameplay capture programs like OBS Studio, and more. Check back for follow-up content specifically on that. For now, we can take a look at the game benchmarks with multi-tasking thrown into the equation.

These benchmarks are derived from more extreme workload scenarios than most will likely run, but it should give a good idea of how much you can really do with Intel’s latest and greatest CPU. 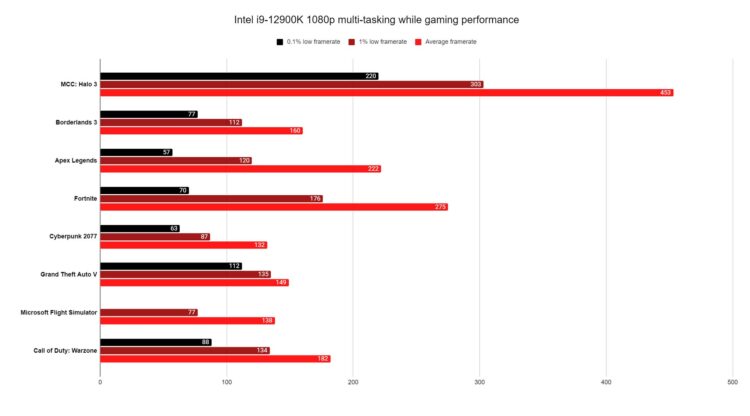 Based on the same multi-tasking conditions we previously tested with, it’s obvious the i9-12900K still took a hit in framerates in some games while handling additional tasks. Games like Cyberpunk 2077, Fortnite, Grand Theft Auto V, and Borderlands 3 exhibited noticeable drops in average framerates and 0.1% lows. However, some titles like Call of Duty: Warzone and Halo 3 performed relatively the same compared to standard gaming results. Still, these results are all easily playable and just outright impressive in some of the titles. Considering we used to need dedicated streaming PCs and/or capture cards just a few short years ago to game while simultaneously handling high quality gameplay capture and other processes without introducing massive stutters, there are clearly some big improvements going on here.

The last several generations of CPUs from both AMD and Intel have made huge strides in multi-tasking performance, and Alder Lake certainly looks like the culmination of years of development from Intel. With 16 total cores, gamers can now do pretty much whatever they want with the power of the i9-12900K backing them up. We noted during these tests that core utilization neared 80% at times, but that was only with the heaviest of hitters like Cyberpunk 2077. Even then, there’s still a little gas left in the tank for Alder Lake’s best to crank up gaming performance further when paired with a powerful enough graphics card.

We’ve included all of the settings we tested with for additional context and for those who wish to reproduce our results. All games were tested in 1080p with uncapped framerates. Most settings are on low unless there’s a valid reason for turning the settings up such as player render distances in battle royales. We use the following settings to show how the CPU performs with minimal GPU bottlenecks, but make some exceptions which are noted on a per game basis. Major settings are as listed:

In-game benchmark tool was used for five runs that were then averaged. Low graphics preset, performed on DX11 API (stutters noticeable with DX12 on this system). Steam version.

20 minutes of gameplay data captured. Chapter 3 Season 1 map. Battle Lab was used and included driving, running, building, fighting bots.
Low settings, max render distance, DLSS off, DX11 API, multi-threaded rendering on. DLSS is disabled in this title because of the significant ghosting that occurs. This, in combination with Fortnite being an easy to run game, means there’s a lower likelihood of users applying DLSS.

Note: 0.1% lows excluded due to abnormal results that were single-digit fps. We will investigate this for future reviews.

25 minutes of gameplay captured on Caldera Pacific map. Low settings, multi-threaded rendering on, DLSS Balanced on, performed on DX11 API. DLSS is enabled for our testing because it doesn’t introduce noticeable artifacts in this game, which means players likely use the feature to reduce GPU bottlenecks.

The 12th gen i9 is an improvement upon earlier models in every sense. It bears a slightly higher price, but the performance and features feel worth it. Also, it's actually in stock for MSRP.

How to make the best Call of Duty: Warzone Pacific Combat Shotgun class

By Sam Robins33 mins ago
Hardware