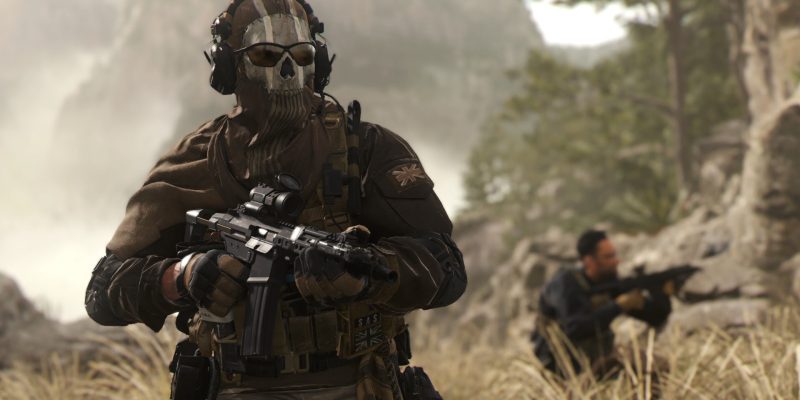 Gaming graphics have been fundamentally transforming over the past several years thanks to better hardware, modern and more efficient APIs, better engines, and the huge strides made in resolution upscaling. Nvidia was first to the party when it introduced its AI-based DLSS back in 2018. However, AMD has brought competition with its FidelityFX Super Resolution as well. Now, it’s Intel’s turn to show off what it can do with XeSS.

Team Blue first teased XeSS last summer with some impressive statements and a demo to back it up. Things went quite for a while though, perhaps in part due to the ongoing delays related to the Arc Alchemist GPUs. At any rate, we have some fresh info about how Intel’s upscaling technology works, compatibility, and when we’ll see it in some games so that we can try it out ourselves.

Intel’s Tom Peterson led the discussion on XeSS, which some may remember for his DLSS presentations. It’s with this in mind that it’s no surprise to hear about the many similarities between the competing technologies. XeSS uses AI neural networks to train algorithms for resolution uspcaling that can be used in gaming, just like DLSS. In very simple terms, the trained network is then able to take a lower resolution image and fill in the missing details for a final high quality image.

You should really watch the presentation, as Peterson does a great job of explaining it in greater detail in a way that wider audiences will still be able to follow. Spoiler alert, it’s actually magic.

The benefits of Intel XeSS are obvious. It allows a GPU to render frames faster at lower resolutions that involve fewer pixels. Gamers can use it to improve their overall framerates, or increase settings such as effects, shadows, lighting, and such without negatively impacting framerates. Additionally, Intel XeSS will be compatible with Nvidia and AMD GPUs so everyone can enjoy the benefits.

Peterson also stated that Intel is committed to long-term support for developers that want to use XeSS in their games. One example shown was for Instinction, which uses Unreal Engine 5 and is due for a 2025 release. Intel generally commented on how XeSS gets plugged into games. It works much like a temporal solution in the render pipelines, which should help to ensure decent adoption rates. Given that developers already have experience adding Temporal anti-aliasing and DLSS to games, we should begin to see XeSS in a fair number of titles if integrating it really isn’t too complicated. 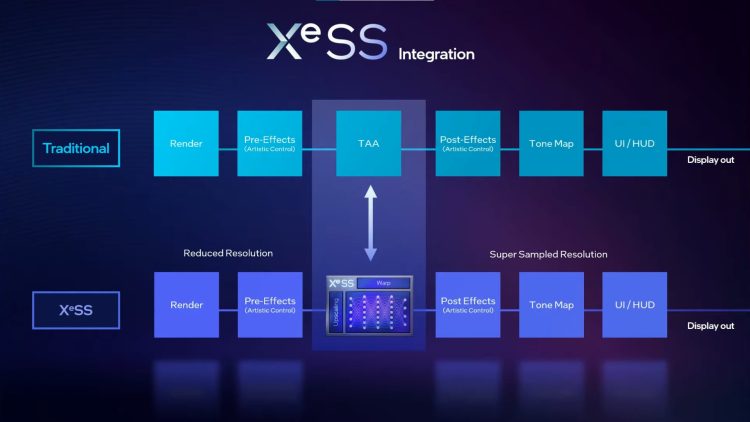 Now for the part that gamers are sure to be most interested in. When can we expect to see XeSS in games, and which games? Intel revealed a slide showing a respectable starting number of supported games. However, Intel has a lot catching up to do if it wants to have as many supported games as the competition. The starting list of XeSS supported games on PC includes at least 21 titles as of now. 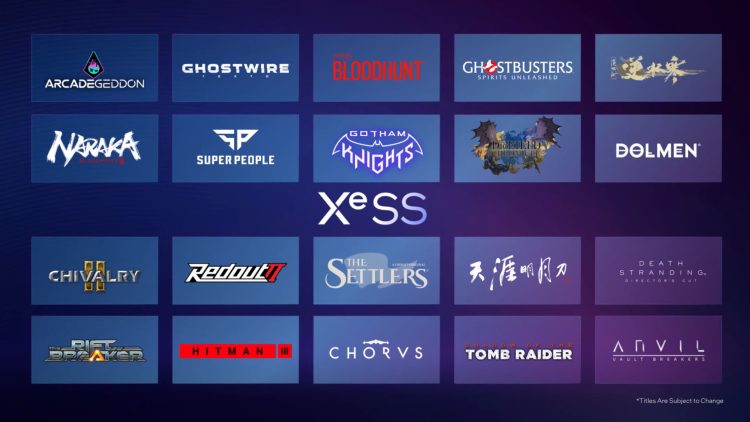 Some of these titles were clearly picked so users can test XeSS against Nvidia DLSS. Hopefully, none of these get dropped, which is in reference to the ominous disclaimer in the bottom corner. (Image credit: Intel).

We’ll just have to keep an eye on updates for the individual games, but we can at least speculate that Intel XeSS will deput on October 28 when Call of Duty: Modern Warfare 2 Remastered launches. Everything we’ve seen so far for XeSS looks promising, but the independent testing has yet to come. Fingers crossed that Intel delivers another solid image upscaling alternative to Nvidia’s RTX-locked DLSS.