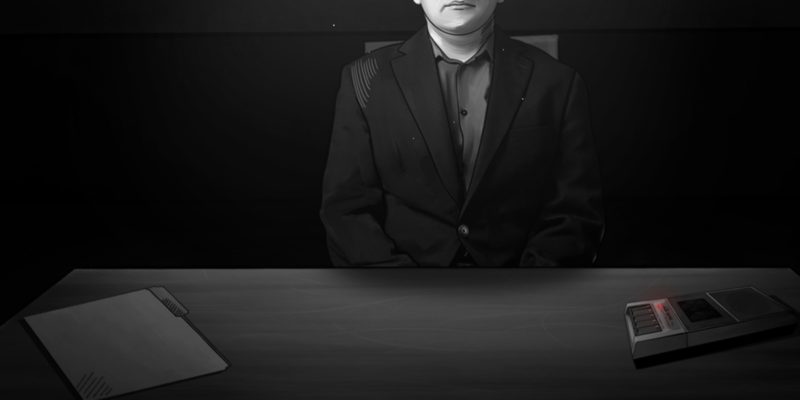 Interrogation: You will be deceived simply wants to ask you a few questions. But don’t expect to get simple answers. This psychological indie game from Critique Gaming puts you in the shoes of a police detective. You’ll head up a special task force to bring down a shadowy extremist organization, the Liberation Front.

To this end, you have a variety of methods at your disposal, some being very questionable indeed. Interrogation starts as a straightforward, noir-inspired police procedural story, but things quickly get more complicated. True to the name of both game and developer, nothing — be it police, terrorists, society, politics, economics, ideologies, or individuals — goes unexamined. In a similar vein to games like Papers, Please or The Occupation, the story is a vehicle for discussing political issues. But is it strong enough to deliver such weighty themes? 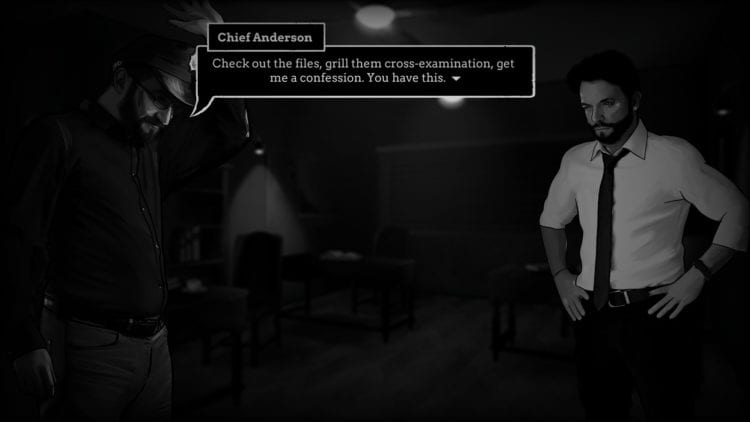 Interrogation initially presents itself as a police procedural. Your detective specializes in interrogating suspects to extract a confession. The core gameplay revolves around this — you select questions to ask the person sitting across the desk. Your aim is to uncover information, establish a rapport, or intimidate them, then go for the accusation when you feel they’re ready to crack.

To assist your efforts, the game gives you two trackers to use. The heart rate of the suspect shows how afraid the suspect is, while the pupil dilation meter indicates how open they are. A frightened subject may be more responsive to threats, while an open one could be convinced with sympathy. Every interrogation subject has a background file that you can check to find clues on how to best push their buttons. Usually, there’s more than one way to break them. 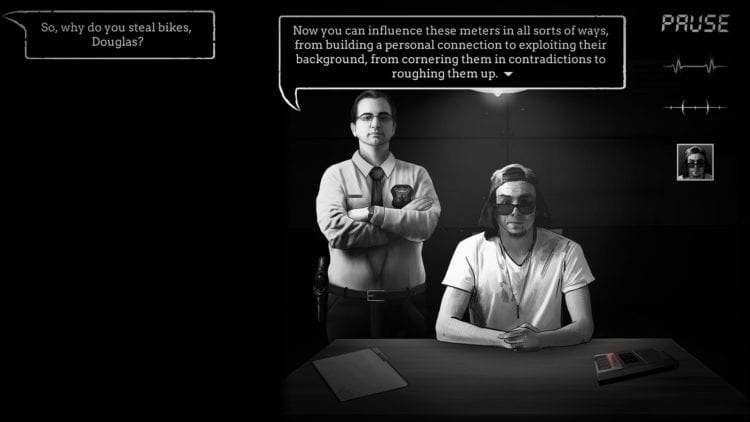 Interrogation’s mechanics are complex, but the tutorial explains them well.

You’ll often be questioning multiple subjects, and it’s a delicate task to manipulate each of them the right way. You’ll also have some special scenarios – including my personal favorite, an especially tense hostage negotiation. Many of the sessions are timed, but thankfully not in real-time. Rather, the countdown decreases when you select a question. The clock can even be a literal bomb countdown, and if it runs out, that’s game over. So naturally, you’re under some pressure to get this done fast.

And when you’ve wasted time on a few dead-end lines of questioning, with the smug perp taunting your failure, that’s when the temptation to get dangerous comes in. 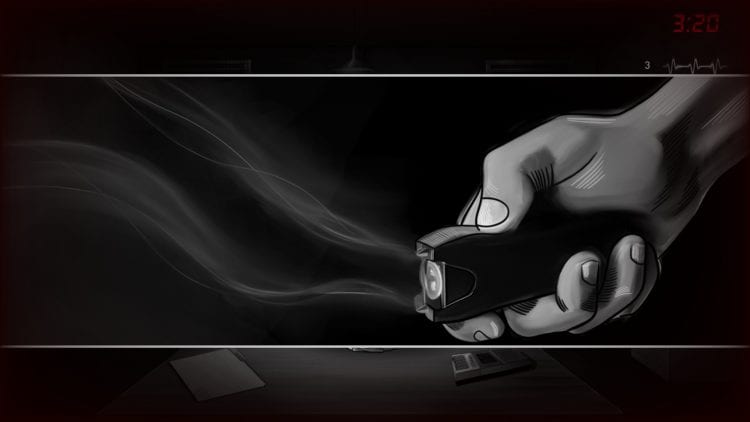 The ”enhanced” interrogation methods present one of the key moral quandaries of the game. At any point in the interrogation, you can turn off the recorder and select a variety of torture options. These include getting up in the victim’s (er, the…suspect’s?) face, slamming them against the wall, even employing a knife or taser. And that’s just to start with.

Interrogation isn’t gratuitous about this, and the torture scenes are quick and not overly gruesome. You see how it affects the victim and can even overdo it, incapacitating them. In mechanical terms, it usually causes fear levels to skyrocket. This can be an effective shortcut to get a confession out of a perp… if it’s the guilty party. Roughing up an innocent person is an unpleasant realization, and reckless actions can come back to haunt you if you’re not careful. Interrogation doesn’t portray torture as good, but it seems disturbingly effective. I sometimes wondered if subjects would give false confessions just to make the beatings stop, but this never seemed to come up in-game.

Fail an interrogation, and after a short scene, it’s time to try again from the beginning. You can also ‘rewind’ to previous chapters and keep multiple save profiles. Rewinding can be a bit tedious when you’re just looking for that last factor to tip the subject over the edge. On a proper replay with different perks, however, more meaningfully different solutions are possible. 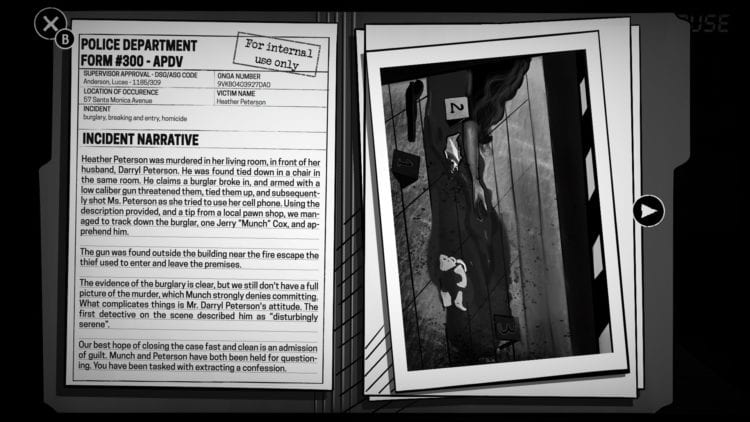 Interrogation‘s aesthetic appropriately matches its approach to morality. The game paints its strikingly rotoscoped world in various shades of gray. Rare flashes of color – usually red – are often bad news. Every character is a capture of a real person, some being from the dev team itself. Realistic visuals keep the game’s aesthetic gritty but also reinforce narrative themes. Interrogation is a game of ordinary people driven to extreme actions against other ordinary people. Using real actors makes this more believable and more expressive than a pure CGI approach.

The storytelling shines by presenting its characters as realistically as possible. Overall strong dialogue portrays their many different personalities with nuance. Depending on your own prejudices (or how you roleplay your detective), it’s easy to find suspects sympathetic. You can use that to get them to open up, but they may also be better at emotional manipulation than you. This can also serve as a method of pushing your own bias buttons. The player might be naturally inclined to suspect some types – the ex-military conservative Christian, the petty thief with a rap sheet, the lefty political activist. Interrogation wants to examine these predispositions and will likely surprise you at least once.

There’s no voice acting in Interrogation, but the music sets the mood well. The score is ominous and tense throughout, punctuated by ambient noise like clicking, flickering, or muffled chatter. Naturally, it gets darker when the threat of violence is on the table. Turn the lights down low and keep headphones on for maximum atmosphere on this game. 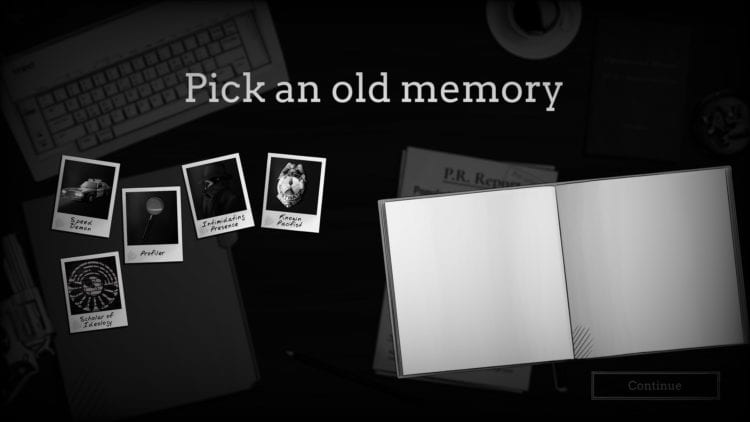 Interrogation‘s plot is relatively linear, but you have plenty of leeway over how you play your detective. At certain points, you’ll pick ‘memories’ – essentially, traits for your detective that can come with perks or drawbacks. You can be a trained expert in ideologies or statistical analysis, which gives additional conversation options. Others can provide some insights, like an exact numerical score for the subjects’ openness or fear. Some enhance specific playstyles: a known pacifist can’t use ‘enhanced’ techniques but has an easier time getting suspects to open up, while other memories make you more intimidating and unlock even more extreme torture methods.

These role-playing elements are sure to please fans of noir thrillers and police procedurals. A scene can feel very different depending on your methods, even if you already know who the perp is. You can also role-play in how you treat your team and other characters.

What happens outside the interrogation room can be just as important. Interrogation‘s detective is assisted by three core team members. Naturally, each has skeletons in their closets, and you might end up questioning their true allegiances. Between story episodes, you can assign them to various tasks, such as tracking down informants or working with the DA. Or, do your team a favor and join them for an after-work beer for a rare moment of levity. 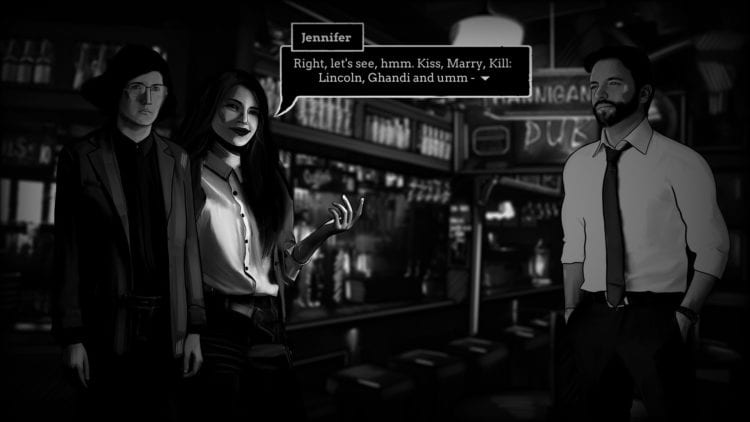 I told you there’d be some tough questions.

In the strategic phase, you have a limited budget to assign to tasks. Here, again, there are some tricky choices to make. Do you run your team ragged for fast results but risk low motivation at a crucial moment? Put off police work to raise funds that might come in handy later? Deliver on a deal you made with a suspect or leave them hanging? The consequences can affect the story, your access to certain NPCs, and your public perception.

The strategic level of Interrogation involves not only managing your team but also cultivating your reputation with the press, the authorities, and the public. Depending on how you handle things, your reputation increases or decreases, providing some gameplay effects. Max out your press reputation and the papers will downplay any wrongdoing on your part. Disappoint your superiors, and team motivation will plummet due to your reputation as a loose cannon. 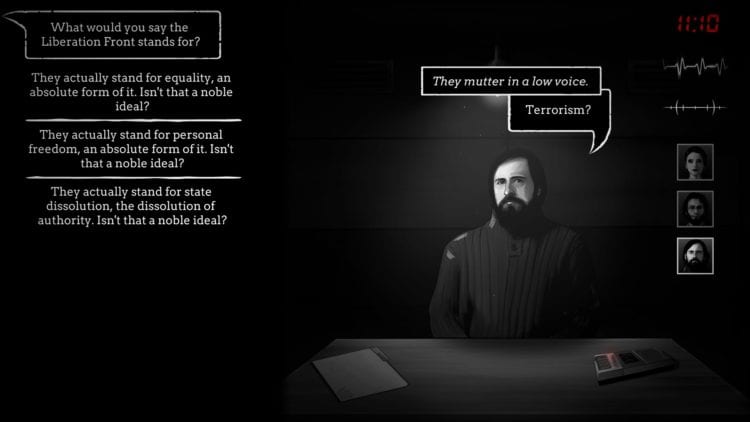 Standing for everything and nothing, and yes, that’s kind of the point.

Interrogation is upfront about being a political video game. But that doesn’t mean it’s preachy or partisan. For the most part, it’s ”just asking questions” and putting the player in a position to examine their own beliefs and prejudices. This measured approach can feel a little off at times. As a catch-all for all kinds of extremist ideology, the Liberation Front somehow manages to be an implausibly slippery alliance of left, right, and libertarian partisans all at once.

The story does try to justify this, and exploiting the factional differences is key to bringing the organization down. Still, the Front comes off much more like a rhetorical construct, in contrast to its more authentic-seeming members. To defeat the Liberation Front, you’ll have to engage with and debate their ideas. Given its broad nature, you may wonder if you’re on the wrong side. After all, you may also have had to justify getting your hands bloody.

Reaching the end of Interrogation‘s story is a thrilling ride, but I did find myself wishing for a more satisfying resolution. Each ending gives a small scene and newspaper report on the aftermath. These hint at some long-term societal consequences but don’t touch on individuals. In particular, the fate of the investigative team members and other important characters that seemed to have narrative arcs are left dangling. It’s as if, after building up to the big picture, more personal stories were forgotten, and that’s a shame. I’d become invested in some of the NPCs, and the lack of closure was frustrating.

Interrogation is an emotionally compelling and thought-provoking look at contemporary issues such as authority and resistance, pragmatism and idealism, both on an individual and societal level. In the end, though, it only asks the questions; the answers are left up to the player. After examining extremism through a variety of different lenses, the game invites you to participate in the discussion through the actions of your detective. Interrogation wants to open your mind rather than change it. Whether or not it does that for you, the well-executed hard-boiled noir story and challenging psych puzzles still make the journey worthwhile.

Interrogation: You will be deceived

Emotional manipulation and the threat of violence are just two of the tools available as you track down a dangerous terrorist organization in Interrogation. Along the way, everyone - the guilty, the innocent, and you - can be compromised.
8

Interrogation: You will be deceived uses its detective story and a compelling cast of characters as a jumping-off point to explore morality and social issues. Even if it sometimes gets a bit lost in the philosophical weeds at the expense of its narrative, the core gameplay of conversation puzzles and resource management is solid and the noir atmosphere absorbing.

Shadows can kill in the Lightmatter announcement trailer

Defend against a demon invasion in Pathfinder: Wrath of the Righteous