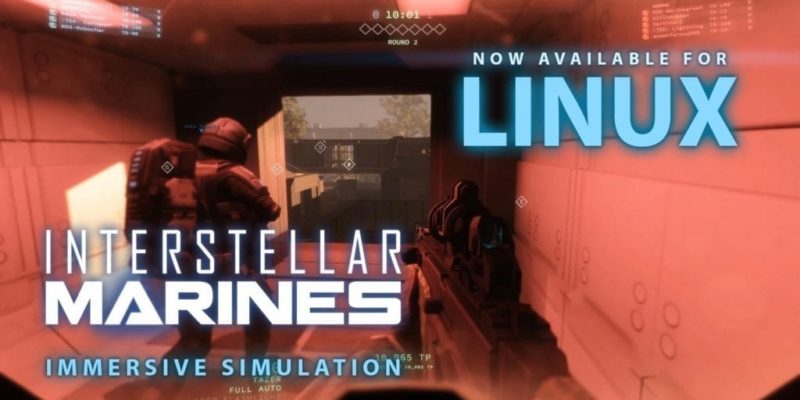 The glitz and glam of the first-person shooter realm has become something bigger than itself. With high-ball engines that seem like only Hollywood could produce, there’s something empty about the experience as a whole. However, many would argue this is where the creative reins are grasped by the developers pouring their time into Early Access titles on Steam. The company known as Zero Point Software is looking to bring a little something different to the table.

At its core, Interstellar Marines is a modest FPS with team-oriented gameplay. The arena-style maps span from extremely close quarters to seemingly open-air terrain. All of the matches take place in a training style facility found just below the surface of Earth. Even though the facility is a subterranean base below the state of Nevada, it doesn’t skimp on the environmental challenges a soldier may face in the future. Heck, you may encounter a walking shark or two. What better way to show off your moves by jumping in guns-a-blazin’? That is, if you can join the ranks and become an Interstellar Marine.

The map content for the game is diverse and keeps the online multiplayer realm heavily in mind. For example, on Stronghold, the newest map to be added with the update, consists of metallic corridors, stairs, chambered office-like space, and forests to line outside. To accompany the forested areas, the sprinklers located on the ceiling sputter rainfall, leaving watermarks on your mask. If the dynamic light of the map has changed, complete darkness may be upon you. At this point, there are free-standing industrial lights whose bulbs can be shot out. This plays into the tactical portion of the game. Players can either choose to fumble in the dark and fire at silhouettes or dawn their beams and be seen by the enemy.

Are those water spots on your HUD or are you just happy to see me?

These are small details that should be mentioned, considering all of the other environmental factors that take part in the game.

Other memorable maps include that of Elevation, in which the environment moves up or down with the sounds of sirens for warning. If you were taking cover behind a small cubicle or set of walls, that set could no longer be there in a few seconds’ time. This ever-changing scenery offers more substance to the game instead of flooding the players with overpowering assault rifles/grenades/shotguns.

The guns in the game are limited at the current time. There is a light machine gun that fires most similarly to the basic assault rifles with holographic sights seen in games like Battlefield or Medal of Honor. Something you will notice right away is the forgiving assets that it’s already received, having a holographic scope built in. The red highlighted target quadrants on the scope I could simply do without, but the red dot sight is something longed for when starting a new FPS game.

The other gun, the AR 03, fires like the battle rifle seen in the Halo series, more specifically Halo: Reach. However, in Interstellar Marines, the kick is present and there is also a noticeable pop when it comes to cracking off a few rounds, which will presumably force you to time your shots accordingly. The zoom on the gun can be useful for enemies that are further across the map and is easily a good swap-to weapon when running out of ammo with your primary.

The game modes are currently pretty sparse. It wouldn’t necessarily be fair to deliver a full review on an Early Access title at this time, more specifically Interstellar Marines, being that new game modes are being added. Next in the update to the game is a co-op feature. This is particularly interesting to me, as the games in which I have mostly entered are often unbalanced. This would be a nifty feature for those teaming up with a friend via Steam or simply looking for a more counter-balanced approach to each map.

Left: The start of the transition on the map. Right: Towards the end. Both from the upper level view.

The most common game mode that you will find for multiplayer is Deadlock. During the ten-minute time period, players are tasked with holding seven different locations throughout the map. Once taken, the opposing team will then attempt to neutralize these areas. This also means there will be no hesitation in gunning you down in the process. The team that eliminates all of the other players and gains control of the waypoints or kills off the whole team will win the match. Leveling up is also part of the experience. Captures and kills account for points, working towards your next skill level. This becomes challenging when respawns are delayed and you are simply waiting to get back into the action, thus learning to play the game more skillfully in a sense.

On the other hand, when you are the last Marine standing, you are then tasked with capturing a waypoint or killing an enemy in order to respawn a teammate. Being the last person standing can often lead to tense moments as there is no radar used other than the icons listed in your mask. There are also no hit markers when firing on opponents, delivering more challenge to the shooter than meets the eye.

Interstellar Marines is surprisingly addictive and fun, considering that there is still more content promised and more features to be desired. I would like to know more background, item classifications and specifics in terms of weaponry. Most of these sought-after features can be seen in the image scroll bar for the game if you visit the Steam page. I wouldn’t normally consider the price-point of a game to be a deciding factor, but for this title, it should. The development team should consider pricing in the sense that it could lead more consumers to pick it up. At this rate, it is foreseeable that the game will can only grow in value as new features are added.

At this time, I would say that having an $18.99 Early Access price point is rather high. Having the full game along with additional content will put you in the $43.99 ballpark. Based on the gameplay itself being quite fun, there is no reason why you shouldn’t pass up this shooter or simply hold out for a destined purchase.

The following is what you can expect if you drop the $43.99 in Steam cash: