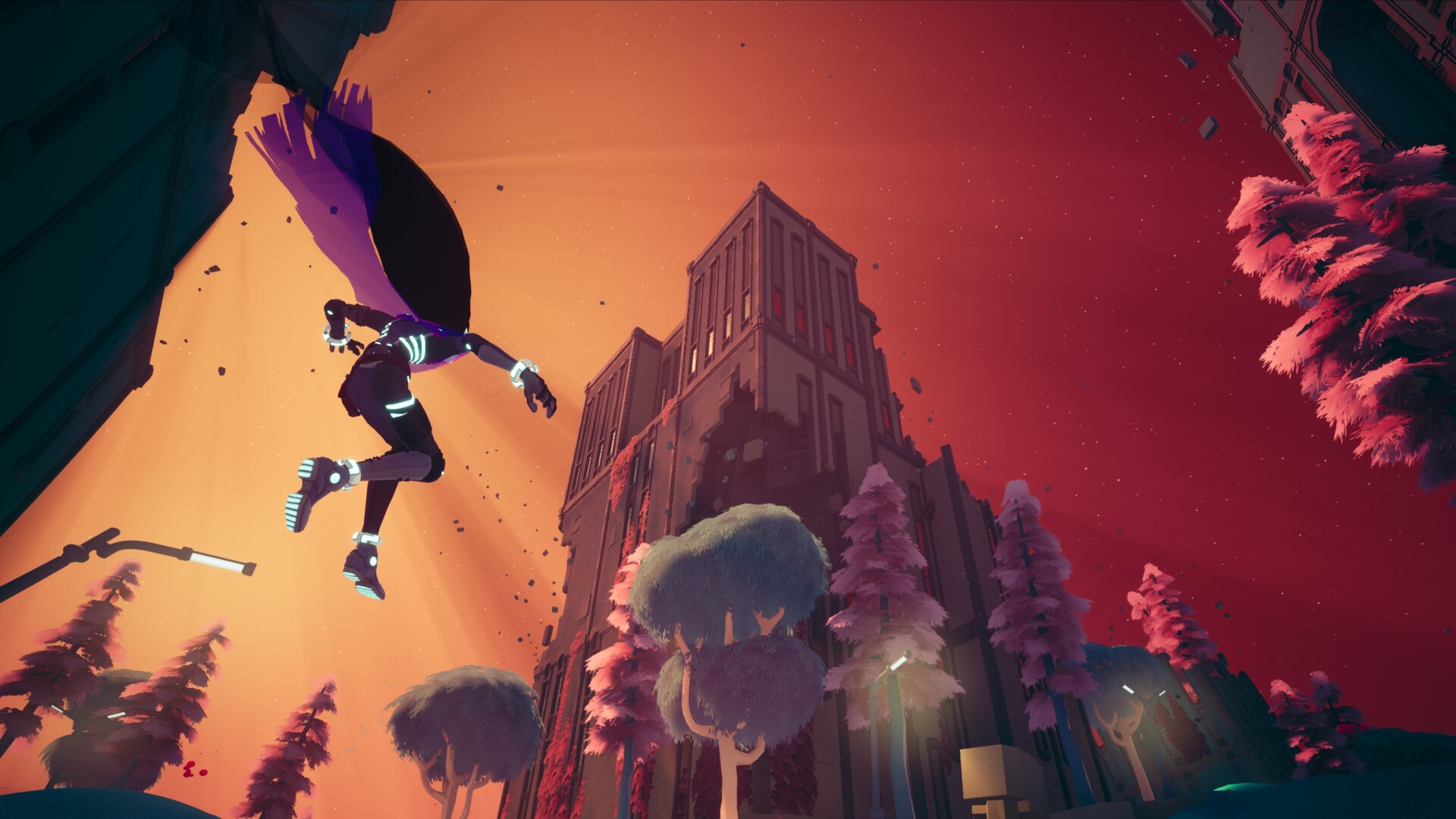 Solar Ash is the upcoming successor to the acclaimed game Hyperlight Drifter. We got to pose some questions to Alx Preston of Heart Machine, the developer behind both games, regarding the narrative and design changes present in Solar Ash.

PCI: When and why was the decision made to take your next game in such a majorly different direction?

Preston: When – 2015. Why – We wanted to create a much larger, freer, and more believable world to get lost in.

PCI: Which of Hyperlight Drifter‘s core concepts did you want to ensure you focused on when making Solar Ash?

Preston: There’s a quality to our tone, atmosphere, our overall aesthetic and the worlds that we create that we strive to make sure align well with all of our projects in order to make us recognizable as a studio.

PCI:  The technological shift from making a pixel game to such a lush 3D world is immense. What were the hardest things the team had had to face while becoming familiar with such different tools?

Preston: Time was a huge issue for us on many fronts! Everything takes longer, takes more work in general when it comes to 3D and the nature of working with a freeform camera. You have to consider all the different angles, types of collision, optimizations. It is an immense coordinated effort to weave it all together. 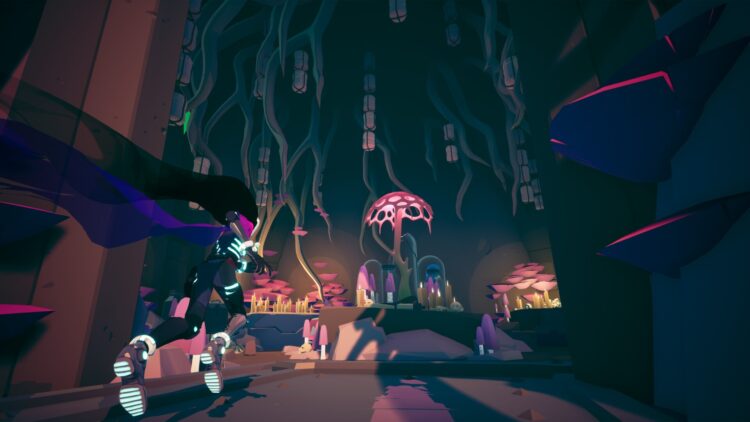 PCI: When it comes to general game design, how did Solar Ash‘s direction differ from HLD‘s?

Preston: Solar Ash is a 3D platformer whereas HLD is a 2D overhead hack-n-slash – those two genre differences can be pretty immense. In Solar Ash, we have a way more open world to explore in multiple dimensions, the speed and agility of our character is incredible, and we’re doing some pretty wild stuff on the tech side for our cloud-surfing and bosses. Our traversal overall is so much different from Drifter.

PCI: I’m assuming Solar Ash will be a notably longer experience than HLD. Is that the case, or did you aim for a similar amount of content?

Preston: Length is hard to determine. It’s up to the player and how much they want to explore: what parts of the optional content they are invested in, if they want to soak in the scenery and the atmosphere or if they’re more the type that just wants to blaze through objectives. I will say that Solar Ash is notably larger in scale, in terms of how much landscape you traverse, but I can’t with great accuracy speak to if it’s going to be a much longer experience. The variability between different players and play styles, including the immense chasm between the speeds you can travel on both ends of the spectrum, will likely lead a larger deviation with this game.

PCI: Were you able to reuse any ideas from HLD for Solar Ash that were limited by the first game’s format and style?

Preston: With any project, it’s kind of inevitable that things end up on the cutting room floor. Usually, as a creator, if you have a neat idea, you want to use it somewhere. That being said, Solar is a very different game in a lot of ways, and the crossover between the gameplay mechanics and even the world itself is more limited generally. Plus, the size of the Solar team and great collaboration throughout the project led to a lot of fresh ideas and perspectives. So I think there are some spiritual threads that wove their way through instead of really specific ideas. 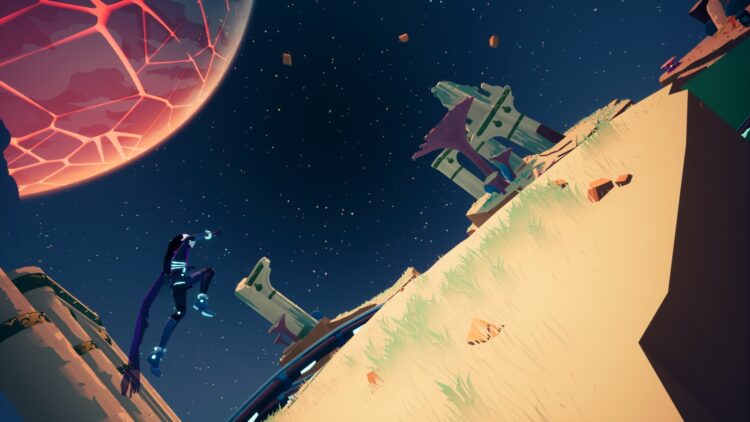 PCI: Is there anything the team misses about working with a 2D world compared to a 3D one?

Preston: The simplicity of 2D has an allure to it, on the production side. There are definitely certain aesthetics that you can achieve in 2D that you can’t in 3D and vice versa that are appealing. That painterly look is a challenge in 3D!

PCI: The sense of speed and freedom of movement on display in the videos I’ve seen is enthralling. What goals were set in regards to making this turn out so well?

Preston: Because Hyper Light was very restricted in a lot of ways, we wanted to be able to go pretty wild on our character control. It was a Day 1 ideal for us to focus on freedom of movement. The specifics of that ideal, how to execute on that, what it meant to be more free and open became a constant check for us in a lot of ways. We had to weigh that against the limitations of the engine and the hardware, player awareness, our own time-tables and budgets and capabilities – you know, reality.

PCI: Will there be much optional side content in Solar Ash?

Preston: Yes! We have a host of NPCs, and lots of collectible bits of story and items scattered throughout the entire world of Solar Ash. 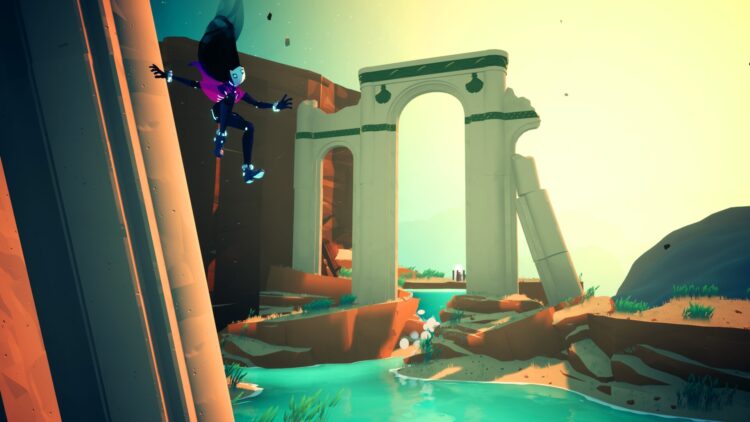 PCI: If you had had Solar Ash‘s budget when working on HLD, how different would that game have been?

Preston: It would have been 3D! Or at the least high-res 2D art instead of pixel.

PCI: How will the narrative presentation in Solar Ash differ from that of HLD?

Preston: We have voice acting, dialogue, and text. That already makes it significantly different: it’s more blatant and less interpretive when it comes to story and character emotions. Voice acting can elevate aspects of storytelling with that human connection you cant derive from plain text – those performances carry a lot of emotional weight that otherwise would not exist.

PCI: Self-publishing an indie game and having it become as successful and beloved as HLD is a rare feat. What was it like seeing your hard work rewarded in such a manner? What advice would you give to other indie studios hoping to follow your lead?

Preston: It was surreal to see people embrace the game! It takes a lot of time to process that stuff, and I don’t think you ever fully can. Certainly you try to enjoy and embrace the positive feedback. At the same time, there’s always more work to be done. As much as I am appreciative, and as much as we as a group feel fortunate to have that success, we still want to keep pushing ourselves to do bigger and better things, to keep changing and evolving as artists.

As far as advice goes: embrace your most passionate, creative thoughts, but always validate and plan as much as you can.

We’d like to thank Mr. Preston for his enlightening answers. Solar Ash releases on December 2, so check back for our review in a couple of weeks.

All the PC game announcements out of the 2022 Annapurna Showcase